Practicing it Up in the Garden 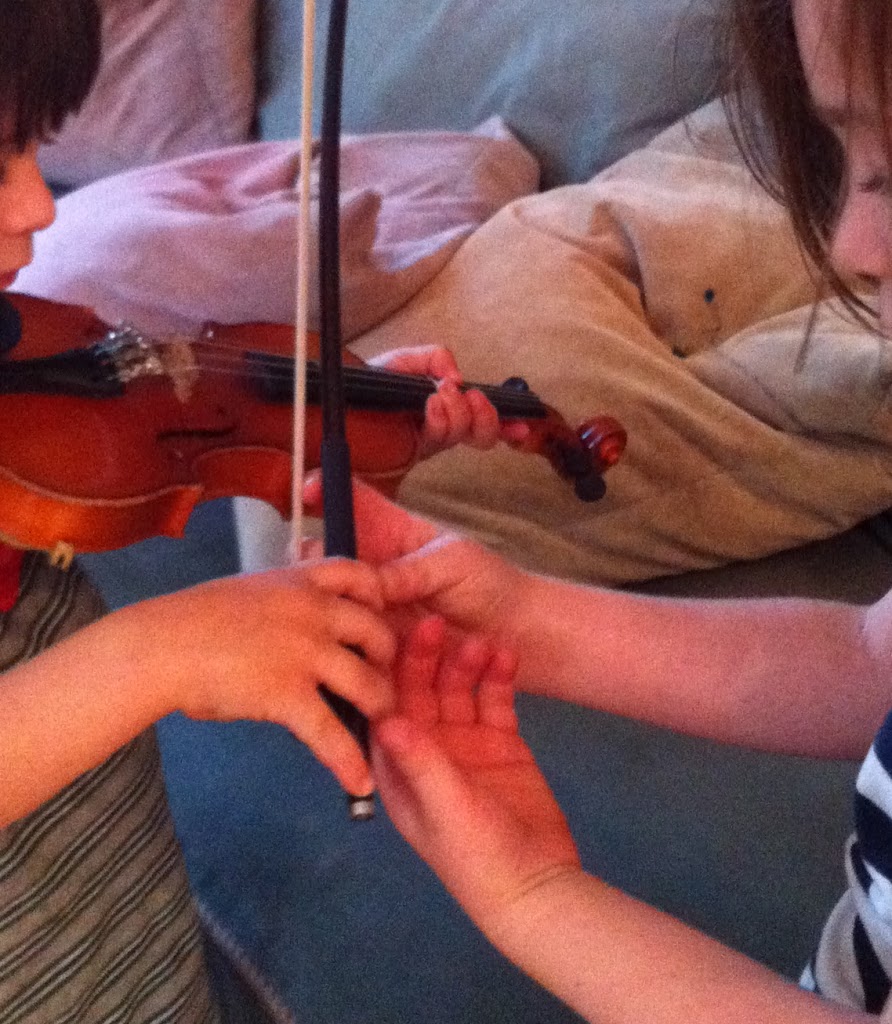 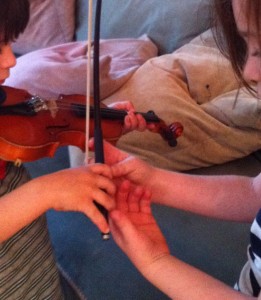 My niece, with her band, has recorded her first single, which she wrote, sings lead on and plays bass on. It’s a rocking song called “Speak Up!” and my kids just got their mitts on a CD of it.

“Speak up, stand up/Don’t let anyone tell you what to do…” sings my 6-year-old daughter, along to her beloved cousin’s vocal. Her little brother Jay mimes playing the descending bass line. We’ve listened to the song four times in a row. I am blown away by the confidence, the mastery, the reedy sweetness of the eleven-year-old voice. And, to make matters even more delightful, the song is about music itself, and the deliciousness of coming into one’s identity as a young musician:

“In music there are no lines to cross/In your own song you are always the boss.”

Tom and I just came from a Suzuki parent class, a two-hour affair held for all parents of Suzuki kids of all instruments. I felt tearful–in a good way–by the end of it. Other parents shared their reasons for taking on what is the equivalent of a college class (and we’re talking about just the parents’ role here!):
-“It gives my son confidence and something he can be proud of.”
-“It teaches my daughter that if you practice something, you will get better.”
-“If I am there to guide them, it keeps them from laying down the wrong neural pathways,” -“This is an opportunity to give my child the ability to master something.”
-“She whistles the themes of the music all day long!”

Interestingly, none of the parents said, “Because I want my child to be the next Joshua Bell.” Everyone present was more interested in process than product. In fact, the teacher (Emily Greene) even referred to playing the violin as a by-product of the method. The real fruits are compassion, frustration tolerance, self-control, appreciation of beauty, self-esteem and a closer parent-child relationship.

I am all for all of this. And the above are the reasons I show up day after day to the practice sheet our teacher makes and insist Elle pick up her fiddle and play her repetitions of “Allegro” and “Witches’ Dance,” even when she responds by becoming boneless and falling onto the floor. But I would add to the list: a life-long relationship with music.

We parents also went around and shared what is hardest for us about Suzuki. Most said the conflicts arising around practice. I added that for me the biggest fear is the thought that plays in my head when Lila doesn’t want to practice and I am making her: I am destroying her love for music!

Why do I have this thought? Because sometimes I hear from other rock musicians that they were forced to take music lessons when they were kids and they hated “that classical sh*t.” (Of course, they went on to become professional drummers…) Or because my father said he hated having to practice his cello growing up (of course he plays guitar now, all the time, whenever he can get his hands on it, and no one makes him…) Or that my daughter herself says, “I’m sick of practicing!” (But if I tell her she can quit, she immediately goes running for her instrument.)

Music is hard. There’s no getting around the fact that in order to play half decently one has to put in some hours. And most musicians have some kind of internal struggle with practicing. (Some don’t. My friend Pete Kennedy told me he still practices 3-5 hours a day, and I can’t imagine he “makes” himself do this. His guitar seems like an appendage of himself.) But anything worth having a lifelong relationship with takes time and perseverance and has hard spots. Somehow we (I) get the idea that music should be all pleasure. Nothing is all pleasure. Everything that matters in life takes work: getting to see a great view from the top of a mountain. Having an incredible relationship with another person. Writing a beautiful poem. Painting a picture. Creating a garden from a patch of weeds.

“At the outset of lessons, neither parent nor child counted on the struggles that can often come between them during practices. First lessons often start after children have seen other children performing – or perhaps playing games in group class. The parent-child duo takes up an instrument with beautiful images of working together happily to produce delightful sounds. There’s usually a honeymoon period, but before long, parents begin to realize that the work of practicing resembles gardening with your bare hands more than arranging fresh flowers in a vase. (And don’t be fooled: even the parents who appear that have practices as graceful as an ikebana also run into a thorn now and then.)

“An important truth from gardeners can help parents who practice with their children: you can’t tug on a play to make it grow. You have to trust the process. But there’s nothing wrong with fertilizing, watering, and generally caring for a plant. That’s what gardeners do. Parents need to do it as well. In the process of tending beautiful flowers and nutritious vegetables, gardeners also encounter weeds. And pests. They also get some dirt under their fingers. In their own way, so will parents.” (from “Building Violin Skills,” Ed Sprunger)

This beautiful quotation from the Suzuki teacher, violinist and psychotherapist Ed Sprunger hit me where I lived yesterday when Emily read this to us. As a writer and a teacher of writing, I realized the universality of this thought. You can’t tug on your writing, either. You can’t tug on your relationship. You have to leave space for the serendipitous, like your 11-year-old-budding-rock-star niece lighting a fire under your 4-year-old pre-Twinkler. For as soon as he’d finished listening to his cousin’s single (5 times in a row,) Jay, who just had his first lesson last Thursday, grabbed his tiny 1/16th size violin and started playing her pop song’s rhythm on the E string.