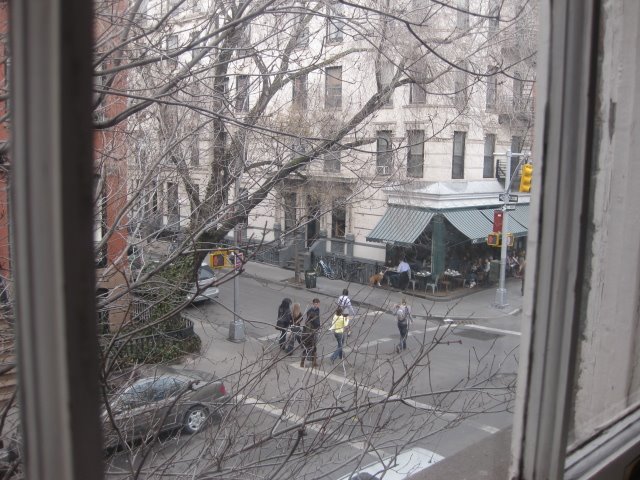 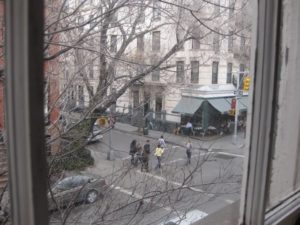 We are in the West Village, in exactly the kind of neighborhood I fantasized about living in when I was 14 years old. Of course, at that age I wasn’t clear about rental prices and the discrepancy between what an artist makes versus what a stock broker makes, but I was clear that I was an artist. More on that later. But here I am staying with wonderful friends who are a sculptors, painters and writers, actors and film-makers. And the report on NPR that we heard driving into the city last night was all about how the stockbrokers were applying for jobs as sales people at Target. So maybe the artists get to keep Greenwich Village after all.

Our show at the Living Room was so wonderful, albeit stressful, what with arriving at 6:50 for a 7pm show. Our dear friend Cadence Carroll opened for us, and even though she was sick with laryngitis, she raised the roof with her sweet music. Katryna had laryngitis too, and we had to lower all the songs a whole step. Our cousin Craig who lives in the financial district arrived just in time to whisk Johnny away for a tour of the lower East Side so that his non-laryngital yelps would not drown out our efforts, and we were escorted home by the fabulous Lucy Roche, whose two CDs are my personal musical discovery of 2008.

Last night Johnny wouldn’t fall asleep, which is unusual for him, and this morning he woke at 6:30 rarin’ to go. After attempting to wrestle him down with both breasts, to no avail, I gave up and we sat in the sunny living room with our host, the sculptor who was reading the New York Times. I told him I was going to join him with my computer and read along on-line, which begat an argument over the merits and demerits of print versus digital information gathering (him:”You’re the reason papers are going out of business!” Me: “You’re the reason Brazil’s being deforested!” Then we laughed and put down our “papers” and chatted about Johnny, Buddhism, how artists need order and tidiness (him) and and mess and chaos (me).

Now I am back in my little guest room with the oriental rugs which my hosts promise are baby-proof, meaning they don’t wince when Johnny pukes all over them (“Babies were born on these rugs! Camels were born on these rugs!”). Johnny has miraculously fallen asleep for what could be an hour and a half, and I cannot believe my good fortune. Here I am, sitting on a bed with my laptop, leaning back with a mug of English Breakfast. Behind my head is a window overlooking West 4th Street, where Bob Dylan and Suze Rotolo once cuddled famously on the cover of his second album. It’s a sunny, warm day, and beautiful people are walking by in elegantly tailored clothes. To my hungry eyes which usually see nothing but people bundled up in down and polarfleece from nose to toes, this qualifies as a parade. A woman just crossed the street in a tight wool fawn-colored belted blazer with a camel turtleneck and pointy boots. Her smooth light-gold hair clearly has been blown dry! I can’t remember the last time I blew my hair dry, and I am happy to live vicariously through this lady. There will be no two-year-olds asking for Elmo or stories about Mother Goose (Dan Zanes’s friend, not the centerpiece for Fairy Tales).There will be no phone ringing, no squirrel men coming by to check on the trap, no dishes to wash or diapers to process. Just possibilities.

Yesterday, I was on the cell phone with Lila as we crossed over into Manhattan. “We just drove into New York!” I shouted into the phone.

Being in New York reminds me of our very early days. As I said above, I figured out I wanted to be an artist (no, make that was an artist) when I was between schools at the age of 14. I had never liked school. Part of my angst about Lila’s going to pre-school is that I found those two years among the most traumatic of my life. Kindergarten was better, but school from age 7-13 with the exception of grade 5, seemed at times like one long socially uncomfortable situation after another. I always felt like I had my nose pressed up against a bakery where the other kids were indulging in different flavors of cupcakes, whereas I was 1. forbidden from eating sugar and 2. too poor to buy one and 3. too proud to ask for a bite. Also there was the whole problem of liking the Beatles in the late seventies when everyone else liked the Bee Gees and Shawn Cassidy. And the problem of preferring books to almost anything else.

But then, the summer I turned fourteen and was about to enter high school, I would lie in bed first thing in the morning after I woke up, and I’d stare at the ceiling and let my imagination go. The realization came to me, or perhaps I concocted it, that I was an artist, and that this was the very reason I had suffered so in school. I was different! I marched to the beat of a different drum! I no longer had to pretend to be anyone but myself! I could give up the preppy handbag with the reversible monogrammed purse cover; and I could also give up the New Wave tee shirt that was also not really me. I was free to be who I really was. I would be a folk singer, living in Greenwich Village like my idol Bob Dylan. I would marry an artist and have kids that we’d take to Magnolia Bakery and have whatever flavor cupcakes we wanted, and we would live happily ever after, writing songs about saving the world.

Ten years later, Katryna and I came to the City to “pound the pavements.” Somehow, we’d gotten it into our heads that if we did this activity (which manifested in walking a lot with a bag full of tapes and press kits and visiting dark bars in the middle of the afternoon where there was no one present to receive our pitch), we would be rewarded with a Chance.

Before we left yesterday, I was on the phone with various people involved in various pre-schools, including admissions directors, the state arbiter of scholarship funds, other parents, etc. Next week will be devoted to exploring our options. I realized at some point yesterday that I’d been approaching the issue more from my own interests than from Lila’s, as in: how will this affect me? “How can I let my little girl go for so many hours a week?” “Where is the damn school, anyway? Will I have to figure in a commute on top of everything else I have to do? Oh, no! The carpooling enslavement begins!” “A co-op? You mean on top of tuition I’m going to have to volunteer my precious time?” And most importantly: “Won’t it be great to get a mid-day nap again?” Sometime in the course of the day, I began to ask more important questions: “Where will she feel most safe and happy? Which school will best foster friendliness and trust? Will she look back on the experience with fondness, or will she, like I do, shudder?” (And I have to remind myself that some kids might look back and shudder no matter where they went–the reason I hated nursery school, as far as I can recall, was because my best friend Eloise Jones who lived downstairs from us refused to talk with me or play with me at school. She would only play with me at home. So I felt dissed on a daily basis. Who wouldn’t hate that experience? And what parent could have predicted or prevented that? Wouldn’t I choose to send my child to school with her best friend if I could?

Did I mention that the pre-school I went to was here in Manhattan? I just looked it up, and it appears to no longer exist. The pre-school that is. The rest of the school is here.

Johnny’s been asleep for a good hour. It’s almost time for lunch. I am going to find Katryna and together we will pound the pavements, this time with a baby in an Ergo pack and our destination uptown to visit our 101 year old grandmother. I am going to breathe in the warm spring air and savor the company of my family. Maybe we’ll even walk by my old pre-school.

I have been on a blogging fast because the deadline for our book is Sept. 7. And I need every hour. But I couldn’t resist posting this. We were on…

Last Friday, right before my Kali retreat, I took a news break to plunge into writing these 30 poems for November, and starting my new novel. I had the company…