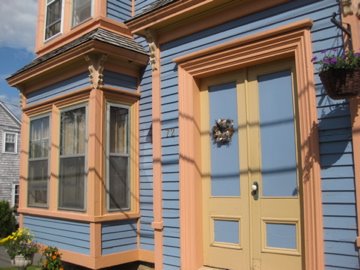 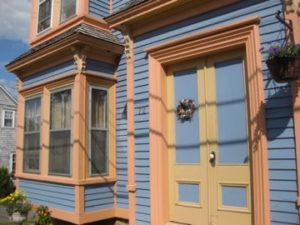 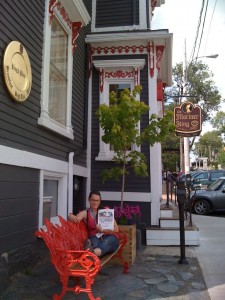 Katryna and I are in Lunenburg, Nova Scotia with my mother, Elle and Jay. Right this moment, Jay is taking a nap, Elle is watching Winnie the Pooh on VHS, Katryna and my mother are going for a walk, and I am wondering how to condense all our adventures into a post I can write in a half hour. Also, Jay just woke up. So I will punch the highlights.

We arrived at my mother-in-law’s house in Wellesley on Thursday evening for a lovely dinner. She told me that my sister-in-law Mary had just gone to see Paul McCartney at Fenway the night before. I am so out of touch that I didn’t even know Sir P was on tour. I have never seen him. If there is one famous person I want to meet, it’s Paul. I just love love love the man. So I made Mary give me a blow by blow, and she even sent me a video and some photos which I wanted to post, but I can’t figure out how, so here’s a pic of Paul just to remind you what he looks like at the age of 66. 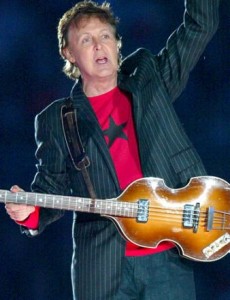 No one slept that night; it was hot and Elle was freaked out by being in a strange trundle bed, so I ended up “sleeping” with her until 5am when we jumped out of bed and headed for Logan. We ran into a friend of a friend headed for Newfoundland and she and Katryna cleaned up the Americano Jay knocked out of my hands (the nice barrista gave me another one for free, along with a vanilla milk for Elle.)

The flight was mercifully quick, and during the last 20 minutes, Jay fell asleep after wailing previously. But as we were descending into Halifax, Elle said, “Mama, I’m just going to get my recorder,” and slithered out of her seatbelt and began scrambling around the plane. I was holding the finally sleeping Jay in his front pack and trying not to wake him with my urgent whispering of “NO, Elle! Get back here!” which she ignored. So I pressed the call button. Kevin the hip steward came to the back of the plane. “Hi,” I whispered pointing at both kids (Elle was currently under the seat in front of her). “Could you please tell her to get back in her seat?”

Of course he was kind and quite effective, and after the plane landed and we were exiting, he let Elle sit in the pilot’s seat.

We were last in line to go through Canadian customs. By now, Jay was awake again, but not delighted in any way. I gave him a small toy which he proceeded to hurl to the ground. The man in front of us kept picking it up and handing it back.

“Got a little one just abou’ this age, myself,” he said in a London accent.
“How old?” I asked.
“Seventeen months,” he said. He was a large guy, closely cropped hair, barrel-chested. I looked down and noticed he was carrying a black backpack with Paul McCartney’s signature stitched in red thread.

“Are you with Paul?” I said, almost gasping.

“Were you just at Fenway?” I was practically squeaking.

“No! I wish!” and then started babbling about how much I love the Beatles, brandishing him my Beatles pocketbook as proof. 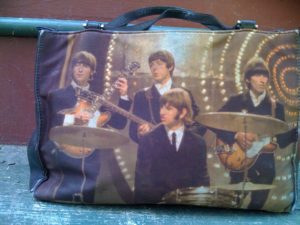 When we got to the front of the line, he gallantly let us go first. I thought,”We should give him a CD. Too bad they’re all packed in our luggage.” We found out his name was Adie and his seventeen-month-old was Grace. We met up with him again at Immigration, and then again when we were collecting our bags. This time, I screwed up my courage. “Do you want a CD? One for you and one for Grace?”

My knees went weak, and Katryna handed him a Sister Holler and a Rock All Day/Rock All Night.

“Cheers!” he said, waving the CDs and turning the corner.

I don’t really care what Paul thinks of our music. Just the idea that he would hear it, even as far-off background music made my inner ten-year-old so giddy with joy that I am still high off it. 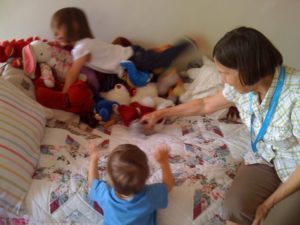 We stayed in the most beautiful craftsman house. My mother babysat the kids. The hosts brought up a gigantic bassinette full of stuffed animals.

We played at the Main Stage Friday night. It’s atop the biggest hill in the town, and the stage is under this huge beautiful tent. 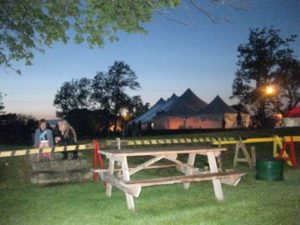 During the show, I asked for advice about where to get some good veggies. Lunenburg is known for its fine lobster (which we partook of on Saturday night) but not so much for its organic vegetables. Ellen Agger brought me the most beautiful salad on Saturday at lunchtime. It was full of edible flowers: borage, nasturtium and bee balm. Also, a variety of greens, green beans and cucumber, all of which she grew herself. Here’s a picture of Ellen. I should have photographed the salad, but I was hungry and Katryna and I ate it in about five minutes. 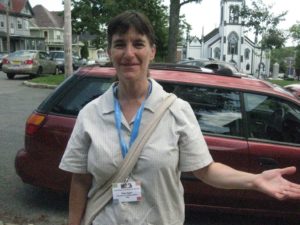 On Saturday, Katryna and I lead a workshop for kids as part of the Lunenburg Festival offerings. We worked for two hours with twelve kids ranging from 4 to 13 (mostly 9 year olds, though) We taught them “Mango Walk,” “Wimoweh” and let them choose a final song. They picked “With A Little Help From my Friends.” I actually hadn’t played that song since I was about fourteen, hunched over my “Beatles for Easy Guitar” book. So as Katryna was scribbling down the words for the kids, I found the tune on my iPod and did a quick review. There’s a movement from the vi chord to a surprise II in the bridge under “Do you need anybody?” which just knocks my socks off. This is part of why I love the Beatles: their quirky little changes, usually a play with majors and minors that throw you briefly out of the key. I loved every time we got to that part.

The kids were amazing.

The Once in a Blue Lunenburg Singers! 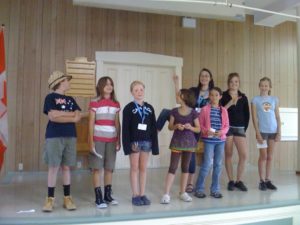 After we learned the songs, we broke for lunch and then we performed with them at the gazebo in the middle of Lunenburg. 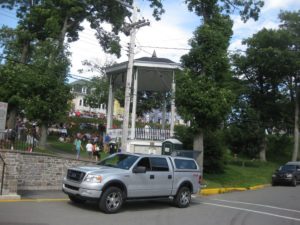 We did a workshop called “Old Songs” and were joined by Lotus Wight who invented this bass harmonica. 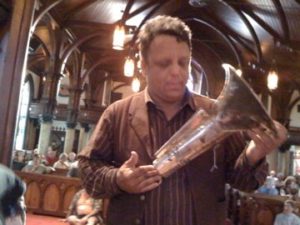 We managed to survive our first night’s sleep deficit by frequenting the Laughing Whale and drinking Canadianas: dark roast coffee with two shots of espresso. Yum! 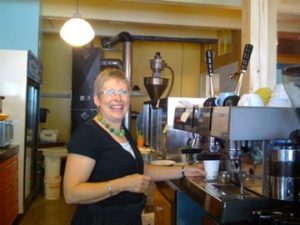 On the last day, Elle’s dream came true and we took a tour of the town in a horse drawn carriage. 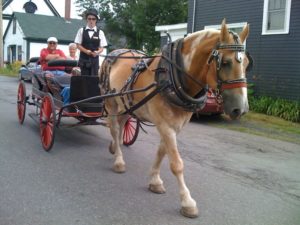 Thank you, Lunenburg, you beautiful town! We hope to see you again! 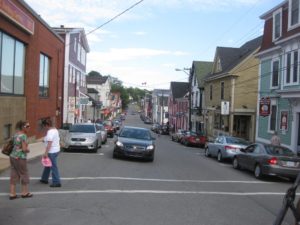 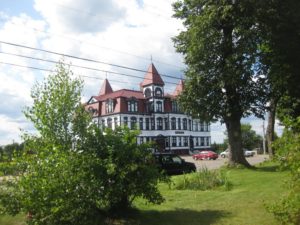 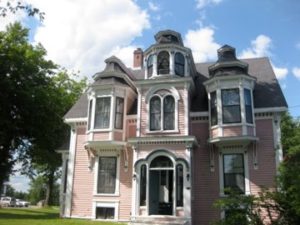 Postscript: When we arrived at customs this morning to leave Canada, the flight attendant made me sign a waiver for my guitar, which I checked. I joked, “So this is so if United Breaks My Guitar I can’t sue you.”

“Interesting you should bring that up,” she said drily. “I was the attendant who took that guitar from the guy who wrote that song. And it was in a soft case, not a hard one like yours here.”

Her name was Sybil. She declined to be photographed for this report. But I did learn that Dave Carroll is from Halifax. In preparation for this trip, I called my friends at Taylor guitars and let them know that my guitar cases were in pretty bad shape. They promptly sent me new ones. 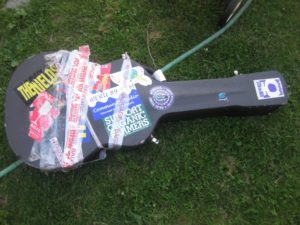