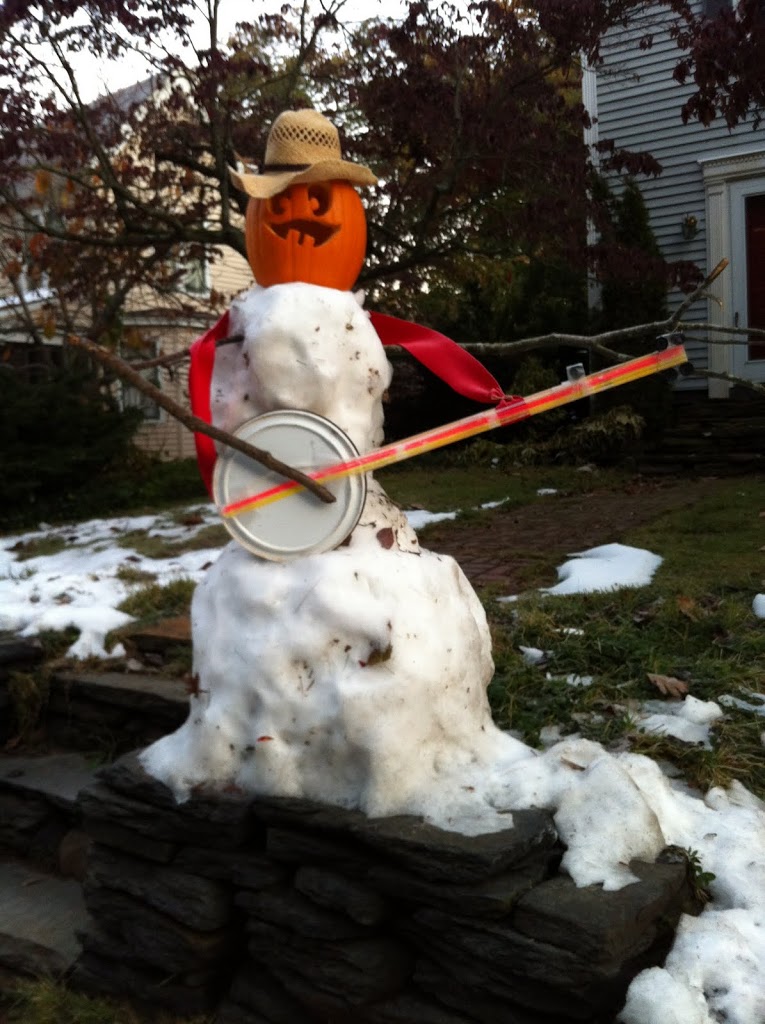 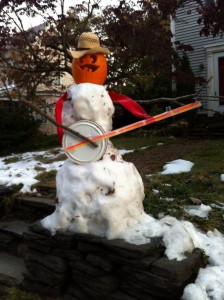 It’s one of the many paradoxes of life that by the time we really become convinced that we want to–need to–change, it’s too late. Not to be a downer; but I couldn’t help but think this way during the aftermath of Halloween weekend. A freak snow storm caused massive power outages and caused me to wish my species hadn’t wrecked the planet, and also that I had solar panels, a generator and a CO2 friendly wood stove.

Like so many in New England, we awoke the morning of Oct. 30 to a cold house on a brilliantly beautiful day. We’d watched the kids catching snowflakes with their tongues the afternoon before, and at the time, the snow seemed benign, albeit unseasonal. 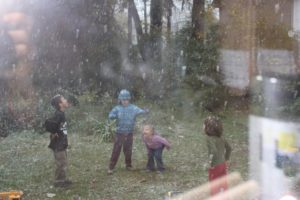 Fun! A snowstorm in October! And our new gas stove worked, at least the burners did, so tea (caffeine) was had by the grown ups in the house, which meant all was well. We’d signed up to run in a Halloween 5K, so we bundled up and drove downtown after enjoying a warm microwave-less breakfast. So far so good. 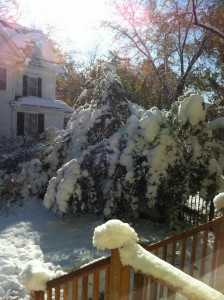 But Northampton was dark, even at 10am. The traffic lights were out and the big clock downtown was black. The roads were flooded with dirty snow, and the parking lot where the race was supposed to start was empty. Our cell phones only kind of worked. Not to be deterred completely, we parked and got out the double jogging stroller and pushed it through the slush, thinking we’d get some warm beverages at a coffee shop. But nothing was open. Tom turned back with the kids, and I jogged toward home, trying to get some intel on the ground, passing by my friend Margaret’s house to see if her party was still happening that night. I found her and her husband shoveling out their driveway. She is a major activist for climate change; yesterday she joined a group of protesters who circled the White House to protest the TransCanada pipeline–she’s serious. It seemed so ironic that her party would be cancelled by a freakish climate-change-induced snowstorm. She was the very person I wanted to be with that day, so I was glad at least that I got to give her a hug and wish her good luck. 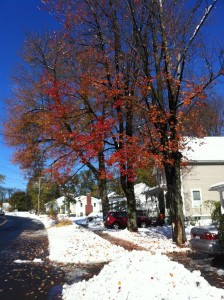 I came across my friends Liz and Kris digging out Liz’s driveway and learned from them how serious the damage was, that we might be in the cold and dark for days, even weeks. I invited them over for lunch, since I had burners, after all–one does want to share when one finds oneself in a situation like this. As I walked home, my mind kept leaping to fearful conclusions. Weeks! Dark! Cold! WEEKS! Kids not in school! COLD! But I kept reminding it that right now, I was just jogging in the snow. Right now, I had hot water and gas burners. Right now, I had a cell phone that sometimes worked. And soon I had a text from my sister in Conway saying she had heat and power, and to come on up for the night.

So we did; we packed as if we were going to be gone for a week. We took all the food in our fridge and freezer and all our computers and iPads and cell phones and favorite stuffed animals and decamped. Katryna made pizza, Kris cuddled my kids, the kids thought they’d died and gone to heaven, and later Dave Hower’s family joined us. We were warm and snug, having a mini Nields reunion. The next morning, with Patty joining us from cold/dark Easthampton, the adults had five computers going around the dining room table, each of us checking FaceBook obsessively, and occasionally communicating with each other via FaceBook instead of across the table, and also barking at the kids to turn off their screens. 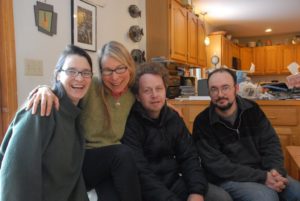 Our power, we soon learned from FaceBook friends/neighbors, came on about 10am and we left Conway in the early afternoon to go home and dress up for the Halloween that was officially canceled. Elle was a Ghost/Pirate/Unicorn/Vampire, and Jay was a Kirby Car driver (AKA Herbie the Love Bug–see photos below). I was Janis Joplin and Tom was a Garden Variety Victim (Tom’s costume every year is some variation on a particular American flag bandana and fake blood). We set out bravely but as soon as we rounded the corner, we saw why the town had canceled Halloween. Downed trees and power lines made sidewalk travel impossible and impassible, and so we put Kirby in the back of Tom’s truck and visited exactly two houses. 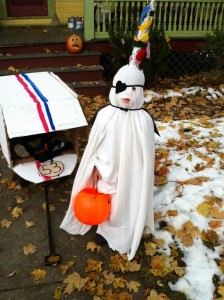 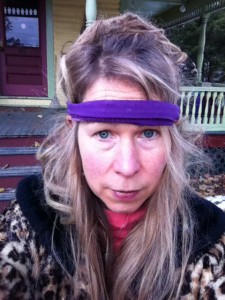 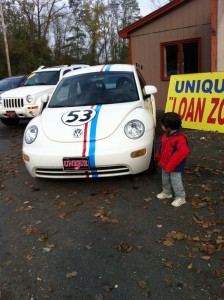 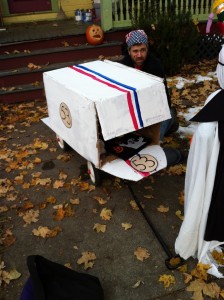 The aftermath has been harder than the actual storm. There is a reason it’s not supposed to snow on Halloween. Our trees still have most of their leaves, so when the snow fell (18 inches, 27 inches, three feet in some parts), the canopy couldn’t hold it, but couldn’t drop it either. So the branches bent, and the branches broke. The sight of all these broken trees is more and more disturbing to me with the passing days; the limbs will never grow back. Great beauties all over town are torn beyond recognition. I have this fear that with each bizarre storm we will lose more parts of the trees until eventually we’ll just have shards and stumps. I keep hearing stories about trees crashing into houses, into bedroom windows where moms were reading to their kids, into metal roofs like huge accusing fingers. Walking home on the bike trail a few days ago, I saw downed trees with their branches fingering the earth, reminding me of the yoga pose vasistasana. No one holds a yoga pose for long. We are putting too much stress on our trees, asking too much of them. They didn’t sign up for this climate. 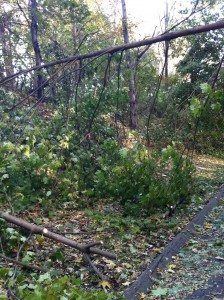 Even as I fret about our trees, I am contemplating getting a wood stove. At least then I could put all the broken limbs to some use (to me.) But with Jay’s asthma, it might not be a good thing. Not to mention the carbon we’d be putting in the air–which is why we have this freak October snow storm to begin with.

How do we consume less? How do we change our ways? Even if it is too late, I want to change, partly out of penance, and partly out of respect. So I pulled my neglected bike out of the barn and have been riding it. Today I took Jay to school, with him crowded into the baby seat in the back. He loved it. “Oh, wook at dose twees, Mama,” I heard him say from his perch behind me. “Dey fell down.” I dropped him off at school only to find that it was once again Halloween (we’ve had many make-up Halloweens), and so I handed the teacher his bike helmet and told her to cover it with aluminum foil so he could reprise his role as Kirby Car driver, this time sans vehicle. And then I biked off, meandering around our neighborhood to see how folks were doing. We all seem a lot closer now, more necessarily connected. And I have a feeling it’s going to become more that way in the future.

Readers: What were your experiences in the storm? What can we do to put fewer fossil fuels into the air, use less? Should we invest in solar panels? Generators? Wood stoves? Where do you see glimmers of hope in the climate battle?

More Than EnoughHappily ever afterNail it all to the floorTake the photo now and frame itI don’t want anything moreI get that it’s not about houses and cars,The right clothes…

The Enlightenment Blues, Part One

Above my desk is a list of my goals. They are:1. Write great, classic songs that will endure beyond my death2. Have a great family which I sustain and which…