Nields Newsletter for Jam for the Fans 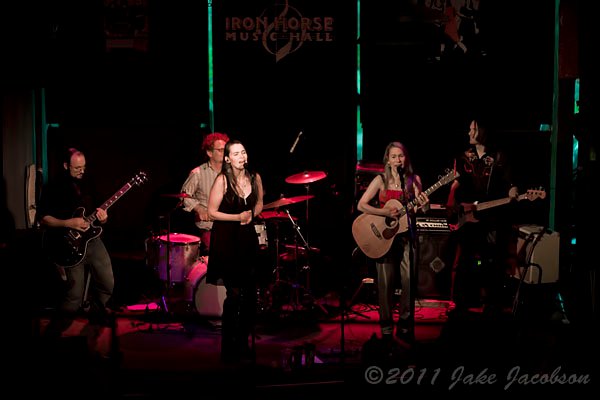 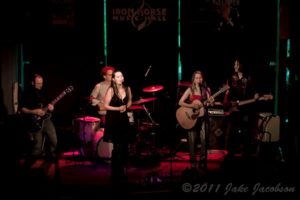 I promise to post more in the next few weeks. I am as tired as I have ever been, but oh, so full of joy and gratitude. Thanks, fans, for coming out to celebrate! For those who weren’t there, katryna and I put together a newsletter like the ones of yore to welcome fans to town last weekend, and this is the text from it. Photo at right by the brilliant and wonderful Jake Jacobson.

When we think about our career over the last 20 years, we think about our music, our miles logged on America’s highways, the stages we have been lucky enough to play, our colleagues whom we mostly get to see at Festivals, the studios where we have created our CDs, but most of all, we think of you. The community of people who have come to our shows, bought our CDs, listened to them and sung along to them in cars and showers, worn our t-shirts, spread the word about our little band, read our books and blogs, commented on our ridiculous status updates. You are our employers. You are also the reason we do this. You are definitely the reason we are still able to keep doing this after 20 years. We thank you from the depths of our hearts and souls. We choose you because you’re funny and kind.

The Nields started in the trunk of our parent’s Plymouth Barracuda when Katryna was just a toddler, but we mark the beginning of our band by the first paid gig we ever had. June 7, 1991, Trinity College hired us to play a show for Alumni Weekend. Appropriate because Katryna had just become an alum. We played with Mary McCormack- now starring on USA’s In Plain Sight and shooting this weekend so she couldn’t make it to our celebration. We played Black Boys on Mopeds and Tripping the Light Fantastic, This Happens Again and Again and The Beatles’ This Boy. We then moved to Williamstown, MA where we pounded the pavement, played in the basement of a Deli and got a big break playing the hotel lounge. There we honed our chops and got our first press from the great Seth Rogovoy: “There is never a cover charge.” He’s written more complimentary stuff since….

We moved to Windsor, CT and started playing all over the East Coast. Nerissa taught us to have the motto: “Say yes to EVERYTHING!” So we did. We were a trio. Our first manager wanted to call us a Neo Folk Trio. We declined. We played some of the greatest clubs in the northeast: The Bottom Line in NYC, The Iron Horse in Northampton. We recorded our first CD: 66 Hoxsey Street with Huck Bennert in Newton, MA. In February of 1993 we recorded a LIVE CD at the Iron Horse Music Hall. That June we invited Dave Chalfant up from New York CIty for Nerissa’s birthday party. “Bring your bass!” we said. He did. Meanwhile his Mom was at the Tony awards because she was nominated for her amazing work in Angels in America. We watched her look glamourous on TV. Then we played music and wept at Dave’s awesomeness. “Will you play with us every gig from now on?????” He said, “Well, if I’m not busy.” We brought him to play with us at The Birchmere in Virginia. From then on, we were sad every time he was busy. Soon we convinced him to build a recording studio and make us a CD. So he did. He found Dave Hower and we made Bob on the Ceiling in Dave Chalfant’s apartment on Atlantic Avenue in Brooklyn above a funeral parlor.

Soon we were officially a fivesome and we travelled the country first in an Isuzu Trooper and a Subaru wagon and later in the gorgeous Dodge Ram Van- Moby Wan Van Kenobe. We got the best booking agent in the world, Patty Romanoff and started kicking butts and taking names. Soon we had a record deal with Razor and Tie and we got to make a CD at the big fancy studio at Long View Farm with the amazing Kevin Moloney of Sinead O’Connor fame. We lived in Motel 6s and ate baked potatoes at Wendy’s and played in rock clubs and church basements and at amazing beautiful festivals: Newport, Philly, City Stages in Birmingham, AL, Winnipeg, Edmonton, Calgary, Telluride, Bumbershoot and so many more. Our Gotta Get Over Greta CD had the coolest cover by the brilliant Stefan Sagmeister. We played at SXSW in Austin Texas and were seen and heard and then we got love from major labels. We had a bidding war between a couple of companies. One of them was EMI Guardian and the presidents drove up form NYC to Burlington, VT in a limo to see us play. And to impress us. And to give us a big cardboard cutout of The Beatles that Nerissa had admired in their offices. We signed with them. They sent us to LA to record with one of our favorite producers: Mr Paul Fox. He requested the pleasure of our company. We stayed at the famous Hotel Roosevelt and recorded Taxi Girl and bought a faux leopard print coat at a thrift store that later was found in someone’s Closet. We are fancy dinners paid for by other people and Madonna’s record company gave us a bunch of money for no reason and we felt kinda famous. We traversed the country in Moby with a trailer named Astro. WE saw little of our beds and counted the number of times we crossed the Mississippi. We played in Bloomindales in Palo Alto where we were the muscial entertainment for Seventeen magazines rip off of a modeling contest. We were asked not to play Greta because it might offend the pre-teens’ parents, but it was ok to sing Taxi Girl. Whaaaaa??? We started noticing that just because people had fancy job titles, that did not make them smart nor did it make them have good judgment nor did it mean that they were actually DOING the job that they were being paid to do. Soon Moby started to get very sick. 3 transmissions later, we were getting the hint that he wanted to be put out to pasture. That Astro was getting to be a drag. Then the record company imploded and it was Christmas and we were a little confused.

But we remembered the two most important things about our career. The first was that all we ever wanted was to Play. No one could take that away from us. We had written so many new songs; we had our very own producer and recording engineer and we knew how to play. So play we would. But wait. There was one other thing… Moby was not going to enable us to go places to play. We would need a new van. Record companies are unreliable, but fans are not. You are the other most important part of our career. You, our bosses, our community, our benefactors. And so we turned to you and asked you to help us buy a new van. We held the legendary Jam for the Van. We raised $26,000 and bought Nessie the Loch Ness Vanster and her trailer, Kitty Box. We recorded TWO CD’s ‘Mousse and Play and we signed with Zoe Rounder and continued our rompings round the country. We played Lilith Fair and sang the National Anthem at Fenway Park and grooved at all those other great festivals and amazing rock clubs all over the country. We toured with amazing musicians like Dar Williams and Moxy Fruvous, Ani DiFranco, Jump Little Children, Eddie From Ohio and The Kennedys. We recorded our favorite CD of our career thus far- If You LIved Here You’d Be Home Now. We took the time to make it everything we wanted it to be. We toured all over spreading the word about it. And you danced and sang and made us happy every minute we were on stage. Maybe if you’d been in the van with us, we could have kept going forever. But you wouldn’t fit.

We recorded a double LIVE CD at our beloved Iron Horse Music Hall. We finished the artwork and the next day Amelia Nields Chalfant was born. We played our last show as a 5 piece band with Nerissa, Katryna, Dave Chalfant, Dave Hower and David Nields in August of 2001 on the New Haven Green.

Soon Nerissa and Katryna turned to Dave Chalfant to create their first duo CD: Love and China. It lulled Amelia in the back of every car that took them to our next gig. Nessie the Loch Ness Vanster was replaced with “Mama’s Purple Tar,” a maroon Dodge Grand Caravan. Nerissa and Katryna played with Patty Larkin, Dar, Cry Cry, Cry, Cake, Cheryl Wheeler, John Gorka– all the folky luminaries. We found the great Paul Kochanski and asked him to play bass. Dave Chalfant played guitar. But mostly Nerissa and Katryna played as a duo. Dave Chalfant was in demand as a producer. He recorded, mixed, or produced CDs with Erin McKeown, Stephen Kellogg, Peter Mulvey, Ben Demerath, and so many more.

Scholastic Books called Nerissa up and asked her to write a book based on This Town is Wrong. So she did. But she also wrote a whole CD to go with it. And we recorded it and released it and asked our band to join us for a tour. They did and we dubbed them THE CRACKERJACK BAND.

Katryna had another child: William and Nerissa had two of her own: Lila and Johnny. We wanted them to have our Dad’s voice in their lives. So we made him record and that became our CD All Together Singing in the Kitchen. That wasn’t enough; we needed to make sure that our kids had music the way we had music, so we started HooteNanny, musical shenanigans for kids aged 0-5 and their grown-ups. We made another family CD, Rock All Day/Rock All Night. We returned to our folk roots and wrote and recorded our favorite CD to date: Sister Holler, in which we borrowed and stole many themes and ideas, and even a chord progression from our musical ancestors. Nerissa then borrowed Katryna’s million dollar idea and wrote a book called How To Be An Adult, a manual for young people trying to figure out how to pay quarterly taxes, get health insurance, register their automobiles, cook chickens and navigate relationships with poise and joy. Katryna drew the illustrations. Our beloved Ed McKeon–he who discovered us back in 1991 in Hartford CT and first played us on the radio–said we needed to make a family DVD and that he wanted to be the one to film it. So we made a DVD called Organic Farm, and there was much happiness. Now we are at work on our 16th CD, Ten Year Tin: The Full Catastrophe. We hope to release it this fall, along with our latest book, All Together Singing in the Kitchen: Creative Ways to Make and Listen to Music as a Family, coming out on Shambhala/Trumpeter.

It’s time to celebrate 20 years of making music for fans. We hope you have a great weekend, see some old friends, make some new ones, discover something wonderful in our little Hamplet. We love you. Thanks for being the best bosses ever.

So I had surgery last Monday. For only the second time in my life, I went under general anesthesia. The last thing I remember is being wheeled very rapidly down…