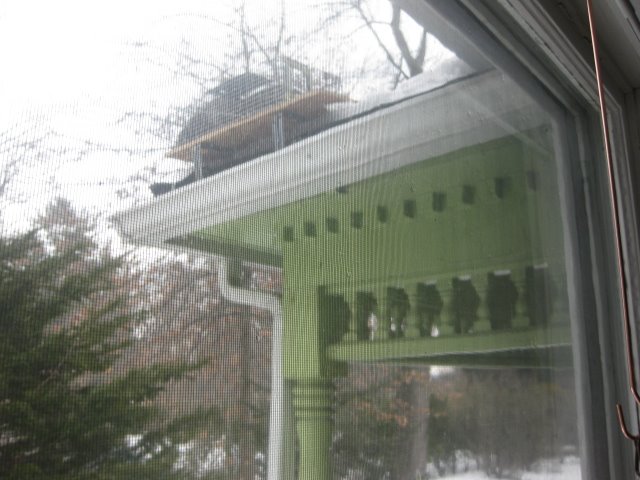 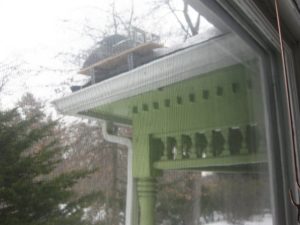 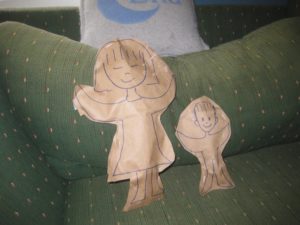 I am sitting next to Lila watching Sesame Street, or as Lila calls it “Real Sesame Street.” We have the most basic cable, so we only get Sesame Street on weekdays at 10am. Other times when I am desperate for a TV break (for her, not me), I put in an Elmo’s World DVD. We’ve been given these by various siblings and friends. We’ve watched them so many times, we know the sequence by heart, and since Elmo’s World has a very rigid formula, we look forward to the mornings we are home and can watch a fresh episode. But this is not a fresh episode. We saw this very one last week. It’s brought to us by the letter Q and the number 6 and it has all the same skits and super 8 films. Oh, well. Lila doesn’t mind.

Elmo’s World is about school today. Speaking of which, that is our big excitement of the week: Lila just got into a school here in town, and that is a big big deal. Kids in our town are put on wait lists for the various pre-school programs while they are still in utero. I did not do this; I put her on two wait lists sometime last year. I have such mixed feelings about letting my girl leave my house (all by herself!!!) three times a week; and yet, as you know, I could use the time for myself, and I could use the time to pay a little more attention to Johnny, who often gets relegated to his Tigger jumpy swing or to the floor where he shouts at us as he struggles to move forward in his now-all-fours, now-tummy porpoise-like gait.

Just so you all know, the squirrel is going to be fine. Merely evicted. Mark the Nice Squirrel Man came over yesterday and set a trap for him right above the large hole in the porch roof.

Darn right. That squirrel must weigh 20 pounds. I have seen him on our porch happily munching our garbage, and he is the size of a large cat. We have named him Harvey. Mark says he will take him about twenty miles away to squirrel paradise.

Almost-Flat Lila was almost decapitated. Lila has discovered scissors. So we made a new Almost Flat Lila and an Almost Flat Johnny.

I lost about $125 which was our merchandise money from our show last week at Kripalu. I know it was stuffed randomly in my overstuffed disorganized purse on Sunday, but now it’s not there. Katryna says not to worry; it will turn up. I feel sick about it nonetheless. It’s not really my money, or even our money. Patty needs to “process” all merch money to give our old band-mates their royalties, not to mention pay herself and our business manager Kathleen. Along with the lost money is my count in sheet. I have no memory of where it might have gone, and I’ve looked in all the obvious places.

Yesterday we got called by the director of Revels Inc and asked to perform in the Summer Solstice Revels in Watertown MA. This is such a dream come true, I can’t even begin to describe my joy. The only problem is that the show is on June 20 and we are already booked at Passim. So we’re going to do the early performance for Revels at 4pm and skip the 7pm show.

I am really sad to be leaving Tom and Lila to go to New York for the weekend. This morning, Lila came to cuddle in bed with me.

“Are you bringing Johnny to New York?” she said, burrowing her nose into my side.

“Yes, sweetie,” I said, knowing what was coming next.

“When Johnny’s a big boy and doesn’t need to breastfeed, then I’ll bring you instead,” I said. “And we’ll go to a museum. A museum is a big big building where they have big big BIG toys of dinosaurs and whales.”

“I don’t want you to take Johnny,” she whimpered.

Wow: a whole other wrinkle to the fabric of the crazy quilt of our lives. Of course, I assumed she wouldn’t want me to go. But I’m taking away her baby brother too! Oy, the guilt. Fortunately, her father is taking her to a sugar shack tomorrow where she will have pancakes and local, fresh maple syrup to her heart’s content.

I found the Kripalu money behind the foot locker.

Harvey has been trapped! I just took a picture, but I’m not sure it really reflects his grandness and heft. I have ten minutes before Katryna drives up to pick me up, and I still need to breastfeed Johnny, yet somehow I feel compelled to call Mark and tell him to come rescue poor Harvey ASAP. Somehow, I am now the caretaker of all creatures in my domain, including my former enemy the squirrel.

Though I will write tomorrow, I may not be able to post. I will try to find an internet connection, but I will be in the wilds of NYC and one never knows. Katryna and Johnny and I are going to visit our 101 year old grandmother.