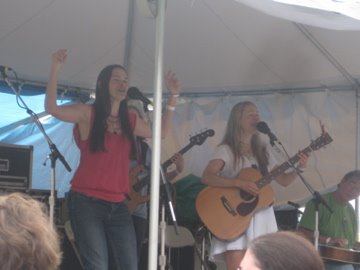 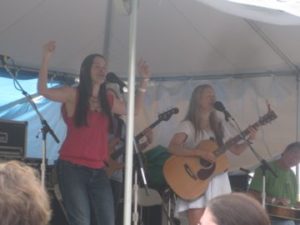 [Note: the writers of this blog are on vacation with no high speed. Can you believe it? we are writing and taking phtographs, so check back as this entry and subsequent ones evolve.]

We arrived at Falcon Ridge on Friday morning, Katryna and Jay and Katryna’s daughter and I in one car. Tom, Dave and Katryna’s son and Elle drove out later in the afternoon. Katryna and I were still bleary from a whirlwind packing of our respective houses, complete with kids’ blow up beds, favorite stuffed animals, ukuleles, our own guitars and paintings and books and CDs to sell, bags and bags of organic produce from our farms, kites flying from the back of our car, the full catastrophe of two families in full swing. One moment I was frantically swabbing my filthy kitchen counter with a dirty sponge, trying to make our house habitable for our kind George Harrison sitters, and the next we were on stage with Dan Navarro, Tracy Grammer, Jim Henry, Jon Veznor and the Falcon Ridge House Band. The day was cool, slightly damp as days at FR have been lately, but the fullness of spirit we have come to know and love was replete in the faces of the colorfully clad friends on the field. I had handed Jay to my friend Kris McCue who was making him giggle and encouraging him to walk, when my parents appeared off the side of the stage. My father grabbed his namesake and beamed into his grandson’s face. I started to cry and didn’t stop for the whole workshop, which was entitled Heart and Soul. What better, I though, for the heart and for the soul than a dose of music?

This is the question I’ve been holding in my mind all week; it bobs up and down like a buoy on the tide. Why does music cut through the detritus of life––all the small stuff we sweat–– better than any other medium (for me), or any other spiritual practice? We all know music is a language, but why is it so universal, so true? And is it universal? When one is at a place like Falcon Ridge, it certainly seems that way; but then again, festival-goers are self-selecting. I do have a friend who proclaims that she is lacking in “music buds” as some pitiable individuals are missing their taste buds, or sense of smell (though there were moments yesterday when I was trudging through the manure-soaked mud near the Port-o-Potties when I thought it might be a good thing to be missing one’s nose buds). Anyway, my friend doesn’t get music. She doesn’t hate it, or go out of her way to avoid it, but she doesn’t see what the fuss is all about. She wouldn’t be the one to hand you a mix CD that she’d labored over, carefully deciding the sequence and exactly which songs you, as her dear friend, just HAD to hear.

I’ve had many friends who have made me such mix tapes, and some of them (the tapes as well as the friends) have saved my life. I have been such a friend. During one period in my early thirties when I was living alone, I made it an exercise to try to cycle through my entire CD collection on an ongoing basis. I had one of those tall CD shelves that holds about five hundred CDs: ten shelves which each held fifty. I would put the first CD on the top five shelves into my CD player which held five CDs and press shuffle. That would be the morning’s soundtrack, and some day’s you’d get Beethoven, Dylan, The Indigo Girls, Moxy Fruvous and Smashing Pumpkins. The next day, the Breeders, Golden Smog, Sonny and Cher and Wilco. Sometimes I’d get the soundtrack to Guys and Dolls. I felt like God was my DJ.

But my life has changed, and I don’t have the time nor the freedom to listen to music like this. For one thing, once I got into a relationship with another person, I found that I preferred talking to him with no soundtrack to distract us. I found the company of a real person was more rewarding than the virtual relationship of my old and new friends the CDs. And then I had a child who had very strong opintions about what she wanted to listen to, and we now use our CD player mostly for Dan Zanes and our HooteNanny disks.

Falcon Ridge is an opportunity for me to have soul-feeding, heart embiggening music in my life, and these days it sometimes does take a gargantuan packing of the car, reorganizing of my family’s life and moving us from one part of the state to another in order to get this.

Me last year at this time. I am singing “The Harvest Table” in honor of the opening of River Valley Market, our local co-op which just celebrated its one year…

How weird is this: when Tom said he wanted to take me away for a romantic night (made possible by Katryna’s birthday gift to him of taking our kids for…