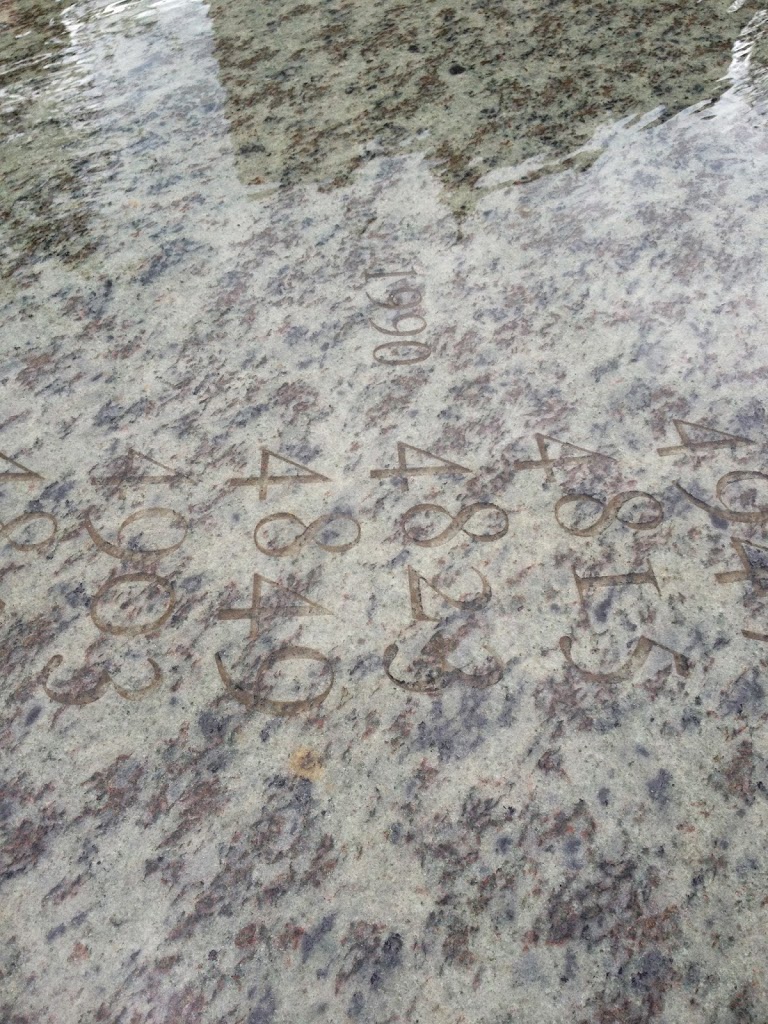 About Spotify. I get why musicians who hope the CD will somehow make a comeback are doomed to disappointment. As a consumer, I cannot believe how great Spotify is. And yet…

Amelia, Elle and I left for my Yale reunion on Friday afternoon, and as we made our way onto 91 South, I handed my iPhone to my 13 year old niece and asked her to play my new mix, 1989. She did so, and for a few songs, we rocked along to the melange of tunes. But pretty soon, someone told a story which led me to mention Jay’s obsession with “Brave,” at which point Elle insisted we listen to it right away. Since we could, we did. And then Amelia wanted to play us something from HER iPod touch, and then we were basically playing DJ. Which is cool. But I realized that we are now in a world where the music is completely in the hands of the consumer. Even the “artist” who does nothing more than create a playlist gets compromised by the handler of the device. It’s all singles, all the time.

So what of the writer who conceives of a full-length CD? Are there any listeners out there generous enough with their time to actually listen through it? I am not sure I am that generous. I just want to hear my favorite songs. Maybe when I was 15 I was willing to listen to all of Paul Simon’s pre-Graceland Hearts & Bones, which is wonderful but requires some patience, but not today. Today, I want that one song (“René and Georgette Magritte With Their Dog After The War”), and I am totally going to buy it on iTunes. I might pay for it five times before I’d buy the entire album’s worth of songs.

I had hoped to blog daily about my reunion, a sort of on-the-scene reporting. As I clambered up the five flights of Lawrence Hall to get to our dorm suite, I was composing the blog. As I found out for the second or third time that two friends of mine had married each other (that’s the great thing about losing your memory–you get to be happily surprised over and over again), I was writing the blog. As I recognized my suite mates, and as we made a wonderful connection around being Suzuki violin parents, I was writing this blog (and taking pictures–see below.) As I took the girls to the Drama School’s fantastic workshop in which two freshly graduated drama students were working a scene from Henry VI Part 1, I was composing in my head. 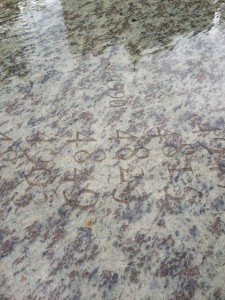 As we studied Maya Lin’s Table, as I was thinking about how hard it was to be a woman at Yale only 20 years after co-education, as I revisited the beautiful Sterling Library where I spent so many hours studying Shakespeare and old microfiche for my theatre classes, all this time I was writing to you. But I had not brought my computer, and even if I had, I would have been too busy talking to old friends (and too tired when I wasn’t talking) to write. In fact, I was so completely exhausted by the reunion that I left early and went home with Tom and Jay, who came down to watch my panel on Saturday afternoon. 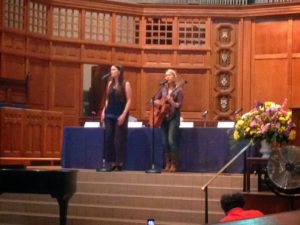 The panel was the reason I was there. I love seeing old friends, and I love nothing more than sitting around and talking, but I probably wouldn’t have gone if the reunion committee hadn’t asked me to participate on a panel. The one in question,“Making Music: An Inside Look at the Music Business/ Creative Process,” consisted of an amazing clarinetist/composer named Derek Bermel who is currently Artistic Director of the American Composers Orchestra at Carnegie Hall, and the beloved musical hero of my class, Mark Miller, Minister of Music at Christ Church in Summit, New Jersey and teacher of sacred music at the Yale Institute of Sacred Music, who also serves on the faculty of Drew Theological School. We knew him as Bubba, the guy who could make Woolsey Hall shake on Halloween when he played the organ. And then me. I brought Katryna for reinforcements. Jen Jacobsen, one of the best singers and people I know, was the moderator for our group, and she did a fabulous job interviewing us, creating a sense of cohesion to our panel, and keeping us on time–an incredible feat, considering we talked and each performed several songs or pieces. Jen is a lawyer for Sony Music who is currently working on legislation to make the Spotifys of the world pay artists and labels a fare percent. So there is hope for us musicians, and I don’t have to feel guilty using Spotify.

How awesome is this? And what is better than musical collaboration?

Eric Rosin, one of my classmates, said, “At Harvard, everyone who shows up Freshman year looks around and goes, ‘Why are all these people here at my school?’ whereas at Yale, the incoming freshman looks around says, ‘How the hell did I get in here?'” I can’t speak to the Harvard experience––and I suspect they actually feel the same––but certainly I and everyone I knew at Yale lived in fear of being discovered as the admissions committee mistake. (I have heard Yale admission folks say that if they took the entire admitted group of 1400 and replaced them with the next 1400 on the list, they’d have just as strong a class.) On our panel, we each shared experiences of being rejected from groups, crushed by reactions of faculty to our work, or–in my case–refusing to try out for any singing groups at all, because I was positive I would not get in. “Yale did kind of try to crush us,” Derek said. “But the other side of the story is that I was tremendously lifted up by my classmates. In the end, that’s what I took from the place.”

Yes. That was my experience too. It was a highly competitive world at Yale, but it was also highly collegial, and everyone (mostly) had tremendous respect for the talents of their colleagues and peers. When I had the notion to start a singing group to be accompanied by my acoustic guitar and sing folk songs, I was absolutely astounded by the enthusiasm my crazy idea drew. On the first day of rehearsal, the Calhoun Common Room was crowded with my friend Trex Proffitt’s entire Freshman Outdoor Orientation Trip contingent. For the next three years, I’d like to say that I put my head down and worked to make Tangled Up in Blue a singing group that people would want to join. But the truth is, I was just having fun, and doing the thing the admissions people had hoped I would do with my little basket of talents. All around me, sophomores were lifting up their heads too, after the Big Crush of freshman year, and discovering their own talents––that gift only they could give––and finding ways to express themselves.

I found my old year book, and next to my photo I’d used as my quotation Dylan’s line from “Tangled Up In Blue,” “All of these people we used to know/They’re an illusion to me now.” And I’d thought of that line again, in the week leading up to the reunion. Who were those people? Did they matter to me? 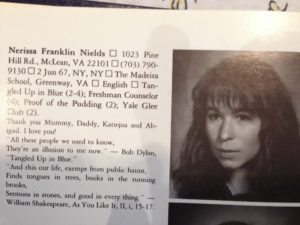 Yes, it turns out. They did. Even the ones I barely knew–even the ones I never knew. They were the school I went to, far more so than the buildings or the classes or the professors. My peers educated me, through their courage–for every one of them, I am sure, had the experience of being crushed by Yale at some point in their four year career–through their ambition, world view, passion and commitment. I would not be who I am today if I hadn’t been lucky enough to go there. All those people I used to know–they are amazing.

And–Yale is not the be-all and end-all. Being at Yale even for 24 hours re-infected me briefly with the idea that Yale was it, that probably no one else had ever had a good idea. But of course I have met thousands of people in the past 25 years who have proved to me that you don’t need an ivy education to be inspiring, funny, brilliant, insightful, big-hearted, courageous, talented and charismatic. In fact, what I was struck by at the reunion was not so much the dazzling achievements but the quiet contentment, that feeling that I was having of contributing appropriately to the world, based on one’s true talents.

And when the panel was over, I knew I was ready to go home. I was full to the brim. I got to see my dear friend Leon Dewan. I spent a lovely twenty minutes hanging out with Trex and his wife Beth and their fantastic kids. I jumped on stage at Woolsey Hall and sang with the Glee Club. We let Jay kick the soccer ball around Old Campus with some other kids who had, in a few hours, become his new best friends. But instead of dressing up and eating the fancy dinner at Commons, we dragged our stuff over to Claire’s Corner Copia, a vegetarian deli where I had practically lived senior year. It was at Claire’s, back in 1989, over my usual meal of soup, salad and bread–– plus the occasional Lithuanian coffeecake and hazelnut coffee––that I first conceived of moving to Western Mass. As I have said previously, I don’t know where I got the idea, but it was probably from Alice’s Restaurant.

I had this vague notion that Western Ma (I didn’t even know there was a town called Northampton, except as it was home to Smith) was hip and full of artists and musicians and intellectuals and liberal do-gooders. So I set my sites on one day living there.

And I am here to say…Susan Chua was right. The food at Claire’s is really not good. But I didn’t care. I wanted to sit one more time in that red bricked room, eat my expensive salad with its meager portion of tofu and elderly cooked vegetables, bus my dish and then hit the road back home, ready to dive back into my life. Goodbye, 1989. And thank you. 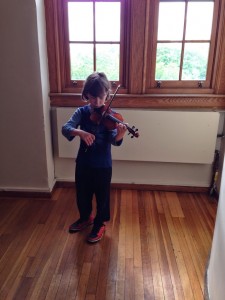 Kit arrived yesterday, and he and Katryna and I got straight to work, running through all the songs, and refining some vocal arrangements. Kit’s first instrument is the piano, and…