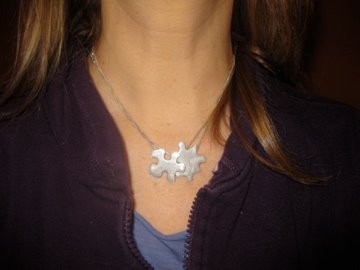 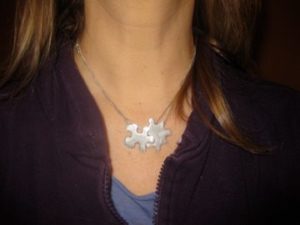 Above are the necklaces my friend Jen McGlashen made. She sent me these and asked me to please wear them as a human billboard for her design. She also sent me a pack of cards with her website address which I stuck in my purse and always mean to hand out to people who compliment the necklaces, of which there are many. But I always seem to have the wrong purse when this happens. So here is her site: www.mcflashpants.com. Enjoy.

She’s brave, my friend Jen. It’s really hard to put yourself out there, I am continuously reminded. We have been working as musicians since June of 1991, which means as of June 7, we have been The Nields in a professional, yes-we-take-money–please–for-our-singing way for 18 years. Our first gig for real money was on that date (June 7, 1991–someone please alert Bruce Palmatier) at Trinity College where Katryna and I along with Mary McCormack (yes, THE Mary McCormack) sang two sets at a Trinity alum party.

I go back and forth with the whole putting-self-out-there thing. Obviously some part of me loves it. Why else would I be a professional musician, or for that matter, writing this blog? I love the connection I get when I go forward in life with my heart open.

And some part of me doesn’t. It is said that the number one fear in this country is public speaking. Not death, which is number two. More people are afraid of what others think about them than they are of losing their lives. I love public speaking, and if you asked me whether I’d rather have the love and admiration of million people or a million dollars, I’d choose the love every single time. Fame practically guarantees both kinds of millions; but it almost always comes along with the disgust of a million people. Or at least one person, and I don’t love the idea that even one person might be offended by me.

For my birthday present, Katryna gave me a spa pedicure along with her presence and participation (namely, she had to sit next to me and chat and get a pedicure for herself while I got my tootsies tended to). In the picture below you can see the tops of my sweet kids’ heads along with my pampered foot. 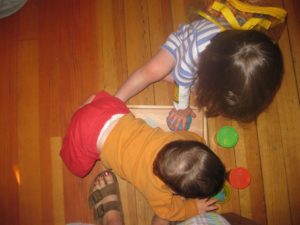 The pedicure is important because I have come to the conclusion (for the umpteenth time–this is not new) that I will not have lived a completely happy life unless I go through yoga teacher training. It’s not so much that I want to be a yoga teacher, though I might. It’s more existential than that. My grandmother, Margaret B. Tenney, discovered yoga in 1967 after traveling to India. She came back to New York City and began a practice that included standing on her head every morning, along with sun salutations and a bowl of yogurt and granola. (In two weeks she will be celebrating her 102nd birthday, so she’s not exactly a bad advertisement for these practices.)

Yoga is not new to me. I had a pretty serious Ashtanga practice in the late 90’s and continued to study different paths, spending time at Kripalu, doing prenatal yoga in both pregnancies. When I practice yoga, I am incrementally more grounded than I am at any other time of the day, even when meditating (trying to meditate, I should say.) This doesn’t mean I’m always present in my yoga practice; I spend much time wondering when class will be over and what I will eat for lunch and how nice that other person’s mat is and how I wish I could do a backbend like the guy in the tank top and how I probably will never be brave enough to do a handstand and how I hope the teacher is noticing how flexible my hamstrings are. Speaking of which, I once injured my knee so badly when I was trying to show off my flexibility doing a standing half-lotus with forward bend that I had to stop practicing for a month. Still. I tend to catch my mind drifting off the beam into its competitive, acquisitive, judgmental ways more quickly on the mat than off.

Plus, there’s the sheer bliss I experience when and after I practice. The hard part is getting me on the mat.

Anusara yoga, the path I will be studying, is all about opening the heart, which I have been convinced for a long time is my life’s work. The central philosophy is in line with my own: that God dwells within us as.

The art of Anusara yoga is a co-participation with the Supreme-not a practice of domination, subjugation, or control of Nature. The poses in Anusara yoga are considered to be “heart-oriented,” meaning that they are expressed from the “inside out.” Instead of trying to control the body and mind from the outside, the poses originate from a deep creative and devotional feeling inside. -www.anusara.com

It’s not lost on me that this time around my intention began because I was in pain. My back hurt, so I went to the physical therapist who pointed out that I walk around in a slump. I wrote about it and one of you angels out there sent me a link to Esther Gokhale’s lecture. I was forced, through pain, into my body: to pay as much attention to my small body movements as I try to pay to the small adjustments my mind needs to make in order to be as calm and happy and helpful as possible. And all I could think of was, “Yoga, yoke, embody. Heart forward. Be brave. Heart forward.”

Do one thing every day that scares you, said Eleanor Roosevelt.

So here I am with my new pedicure which will serve as a bell of mindfulness every time I lunge forward from down dog. Of course I wish I’d chosen purple like Katryna did, but probably if she’d chosen Cancun Fiesta instead of Louvre Me Louvre Me Not, I’d have wanted the pink. (What a fun day job that would be, to come up with nail color names!)

I am really scared. I am going to be studying with the yoga teacher of my dreams. We have become friends recently, which is a whole other amazing, grace-filled story. I have mentioned a few times about my secret wish to do yoga teacher training, and she kept saying it would happen when it was meant to happen. And then in the space of a few hours we figured out a way to make it happen–this summer.

In a strange way, this is an even more frightening version of “putting out there” than speaking is, or certainly singing is. She is going to see me as an imperfect student instead of her strong, smart friend. She’s going to see my pride, my competitiveness, my weakness––all the things I regularly try to disguise. I am going to have to show up with my body, in my body, with my heart open and forward, even when the last thing I want to do is move my body, be in my body, risk my own judgmental competitive thoughts. I am going to have to show up for the God within when I’d rather tune out and read Twitter posts or find some other way to slump in a chair. But what I’ve learned is this: I get to show up in whatever state I’m in, and I only ever have to work to whatever my own edge happens to be. I am pledging now to honor the tightness, to go gentle, to embrace the body that I have and work with what is, not what I think might be (given years of practice and some plastic surgery.) And whether or not my teacher loves and approves of me is ultimately none of my business.

And I don’t fully know why my call in this direction is so strong. I believe and think empirically that it will make me a better songwriter and musician, a better coach and a better writer. Most importantly, I think it will make me a happier person which will infiltrate all my relationships, but maybe none of this is true. But my body says, “GO,” and I’ve learned that the body knows.

A good friend just told me about a parenting philosophy (Vicki Hoefle who has a program called “Parenting on Track” ) that resonates with me. She said, “Instead of praising your child when she hits a home run or paints a beautiful picture, ask her how it feels to do this. That way she gets her affirmation from within rather than from an external source.”

I love this. My inclination is to shower my kids with praise for every little accomplishment. I’m an enthusiastic cheerleader, so this happens all the time. But what if I inquired instead? What if I held back just a tad, so that it’s not about me and my reaction but an invitation to curiously explore the feeling? That way my children get to find their own God within, their own North Stars, without all my editorializing. And then maybe, just maybe, they will not need to stand on a stage or look at their bank balance or be dependent on a partner to feel how fully and completely they are loved by God, by the planet, by their own miraculous bodies.

Day 24: That Dream Everyone Eventually Has

Waiting on a roof…. It happened last night, a couple of hours before the lunar eclipse. I was in a spaceship circling the devastated earth, with my family, including my…