How I Was Taken Captive By a FitBit Challenge 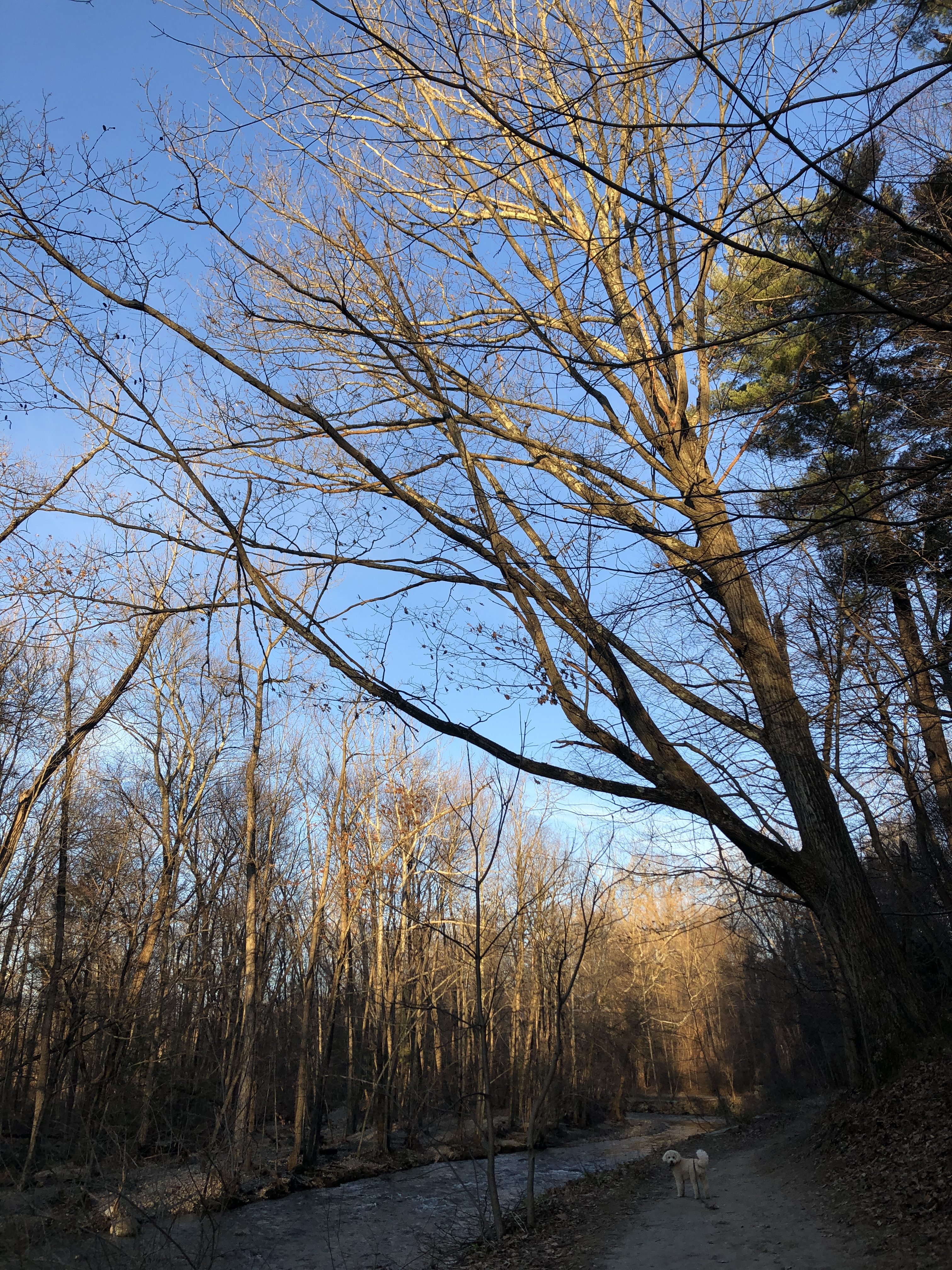 For months now, my friend Karen regularly invites all her friends to compete in a Workweek Hustle. The object, of course, is to be the one to get the most steps in five days. Competition starts at 12:01 Monday morning and ends at midnight the following Friday. I always accept the challenge, but don’t really pay attention. Until, that is, I went mad. Before that regrettable occurrence, I would have said I preferred to compete against myself, not other people. I try to meet certain goals, like ten thousand steps a day, or lifting 2-3 times a week at the Y. Last fall, my exercise regime was reduced to walking my dog Hudson. I found great solace on a path that runs along our small local river, noticing how the landscape changes day to day, and within each day. There is my favorite sycamore tree, catching the sun’s late afternoon gold. There is the place my dog always jumps in to swim, no matter how chilly the water. There is the spot where I once saw a bald eagle, massive and still, glaring at a flock of Canada geese, seemingly frozen in the reservoir. For months, while the FitBit ladies accrued steps, I walked my little route, content to come in second or third, or even later in the roster of these women I don’t know. Karen has lived many places in the continental US, and she makes friends easily. I will likely never meet my competitors.

The last quarter of 2018 was unusually difficult. I wrote about it in verse during the month of November, and now, things being more or less on the right side of the looking glass, I am back to working daily on my latest novel revision, teaching my classes, rehearsing “Bohemian Rhapsody” with my advanced chorus and “Alexander Hamilton” with my younger one. I am parenting my children, 12 and 10, amazed at how much more they seem to need me now than they ever have. I am spending as much time as possible with my beloved husband, and reading delicious novels. Our new Little Blue Studio is full of my classes, and when it’s not, there’s usually an AirBnB guest in it, asking me for extra blankets. Life is full and rich, and up until Christmas, I had a healthy sense of how seriously to take this FitBit Challenge. Which was: not very.

But something snapped at Christmastime. Maybe it was reading Min Jin Lee’s beautiful novel Pachinko, a four-generation saga of a Korean immigrant family. Min Jin, a contemporary of mine from college, was a lawyer who quit law to become a novelist; she struggled with health and financial issues while trying to teach herself how to write. As a mother of a small child, she could not take off to get an MFA. So, like me, she did a DIY. It took eleven years for her first novel to sell (Free Food For Millionaires) and her idea for Pachinko germinated for thirty. While her story gave me hope, it also made me kind of single-minded and annoying to those around me, while I spent Christmas vacation stealing hours to work on my own novel, trying to make it so good that it will surely be a finalist for the National Book Award. Once it’s finished and published, that is.

When I am most centered and clear, I know that, being an artist, my work is to reflect and create, and that there is a good chance it will never be remunerative or widely celebrated, and I am ok with that. But at other times––Christmas, family reunions, for example––this doesn’t seem like enough. I long for achievement, for a more rarified air one can only breathe by summiting peaks, exerting, ––yes––winning.

Ah, but: I am afraid of competing. Because I am extremely competitive by nature, and I dislike this about myself, my default is to drop the rope when someone pulls on it, so to insure I won’t be tempted. I don’t like to lose, and I don’t like conflict, especially not with a family member. Most of all, I don’t like rejection. I have never entered a competition for my songwriting. I rarely submit for publication. I haven’t applied to a school since 1984. I have barely ever applied for a job. I suppose, being a performer and self-employed, my whole life is a kind of flirtation with rejection, but I have noticed this past fall how crippling my fear has become. And yet I purport to espouse Samuel Beckett’s philosophy: “Ever tried. Ever failed. No matter. Try again. Fail again. Fail better.” It’s time for me to live this fully.

Enter the FitBit Challenge. This woman named Jo B was the reigning champion. This is what I know about her: she lives in Virginia. She is an Episcopal priest. She is older than me. The tiny picture of her face on my FitBit app shows a generous smile. And, between Christmas and New Year’s, I made her my nemesis.

“Beat Jo B! Beat Jo B!” I chanted with my children. “Beat Jo B! Beat Jo B!” I screamed as I raced around my parents’ Florida condo, marching from one end to the other. “Beat Jo B, Beat Jo B,” I muttered as I ran up and down the Naples main drag, inhaling gas fumes from the trucks and avoiding broken glass as I pounded the pavement. I got everyone’s drinks. I brought everyone’s shopping carts back from the parking lot. I was the opposite of efficient in all things involving movement, and by the end of the last week of 2018, I had more steps than any of the FitBit strangers on Karen’s challenge.

I noticed, then, how addictive it was for me to check my FitBit app, to see if anyone was tailing me or worse, ahead of me. If that were the case, I would jump up and run around the kitchen island, to the consternation of my husband. Having sold my treadmill in October, I bought another treadmill, this time wrestled up to my new office in the attic.  It didn’t work up there, so we had to hire  an electrician to install a dedicated outlet.

In short, I was obsessed and slightly insane. Maybe more than slightly.

Do you know what I won for being the FitBit Challenge champion? A graphic of a trophy on my iPhone.

We return to ourselves in strange ways. In my week as reigning champion, Jo B was constantly on my heels. I went from an average of 10K a day to 15K. Jo kept up with me. At 10:30pm last Friday, I was a good 2k steps ahead of her. I was done. I could not have walked any more if I’d wanted to, and I had Pachinko to curl up with. Plus, it was late, and surely Jo was on the couch, or in bed herself, resigned to coming in second. After showing my phone to my husband, (who yawned, “Oh, you’re beating Jo B again,”) I turned off the light.

The thing about getting addicted to something on our tiny screens is that what giveth soon taketh away. Imagine my horror, my plunging heart, when I awoke to the terrible news that Jo B had––somehow between 10:30pm and midnight–overtaken me by a thousand steps! I felt like I was the vampire and she, in the night, had plunged a garlic-infused crucifix into my sleeping heart! For several days, I couldn’t look at the app. I had PTSD just thinking about that evil aqua-colored FitBit logo with its diamond pattern.

But here’s the thing about obsessions: when we don’t engage with them, we quickly lose interest. Last week, I jumped up every hour and trotted around the room, just to keep my hourly step quotient topped off. I planned my days around two long jaunts. This week, I am back to work. I could slack off and go for a long run, but that would mean I can’t write my book. Or write this post. Or sit at the breakfast table and dish with my family about President Temper Tantrum.

So as of this minute, I am in fourth place. Jo B has over fourteen thousand steps on me. I imagine her, she whom I’ve never met, long-legged, gazelle-like, bounding over the prairies, or the Virginia suburbs, collecting her steps, while I, a peaceful Ferdinand, sit in my meadow smelling the flowers.

The Nields and their CrackerJack Band at the University of Hartford TV Studio recording their Family DVD on May 2, 2009. Photo by James Levine. I am reminded today about…