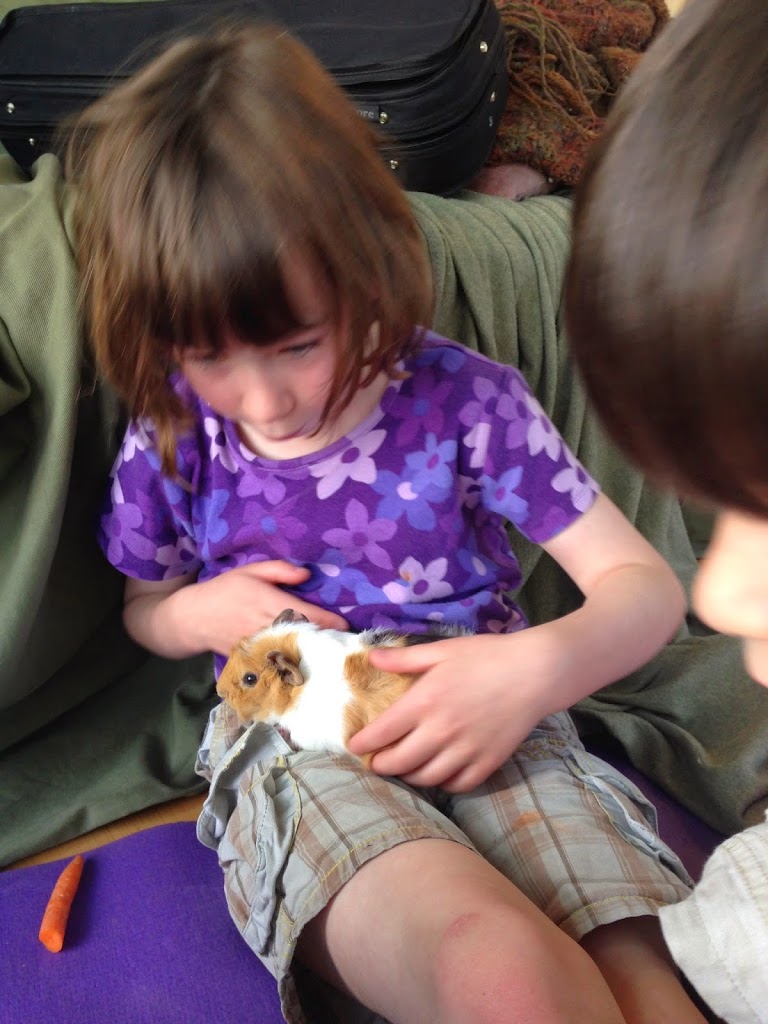 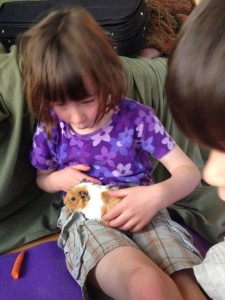 My kids got guinea pigs last week. The guinea pigs effectively bought us a year off the dog question. What Elle really wants is a dog. Her ambition in life, courtesy of a movie called Snow Buddies (which features talking golden retriever puppies who all have the word “Bud” somewhere in their name) is to be a musher. She wants to move to Alaska or Maine and raise sled dogs. Meanwhile, she would like us to get her a dog, more than anything in the world. In the past few months, we have found her stretched out on the couch, weeping silently, her arm over her eyes, grieving sweetly for her lack of dog. Everywhere she goes, she points out the dogs, races up to their owners and politely asks if she can pat them. She gets down on her knees and puts both her hands into the fur around the dog’s neck (the bigger the dog the better, mostly: her favorites are Aussies, Great Danes and, inexplicably, Shih Tzus). This is very hard to resist.

Jay does not want a dog. He wants to be a dog. For now, I prefer the Jay dog to an actual dog. Jay still can curl up easily on my lap (though he is not allowed to lick my face, though he can pantomime), and I am savoring these last months of Kindergarten. I too want a dog, in theory. I don’t really want to have to walk it, and I don’t have time this summer to take a pup to obedience school. But I know I can’t stay the tide forever. If you saw Elle with her arm over her eyes and her fingers in our neighbors’ dogs’ fur, you couldn’t either.

So for now: guinea pigs. Their names are Eleatt (pronounced “Eliot”) and Zippy. They are great, so far. They purr and grunt and chirp. Elle sits for hours with Eleatt on her chest, curled in a little ball. So far, Jay has not killed Zippy. All is well.

This trip is my 50th birthday present to myself. And I feel so ashamed about that right now. I have a long list of places I wanted to see–Tate Modern,…

Day two was a kind of half a day. We arrived at some crazy early hour, sleep-walked through a customs line that snaked fifteen times across Heathrow. When we stumbled…