Falcon Ridge and the Return of Hope 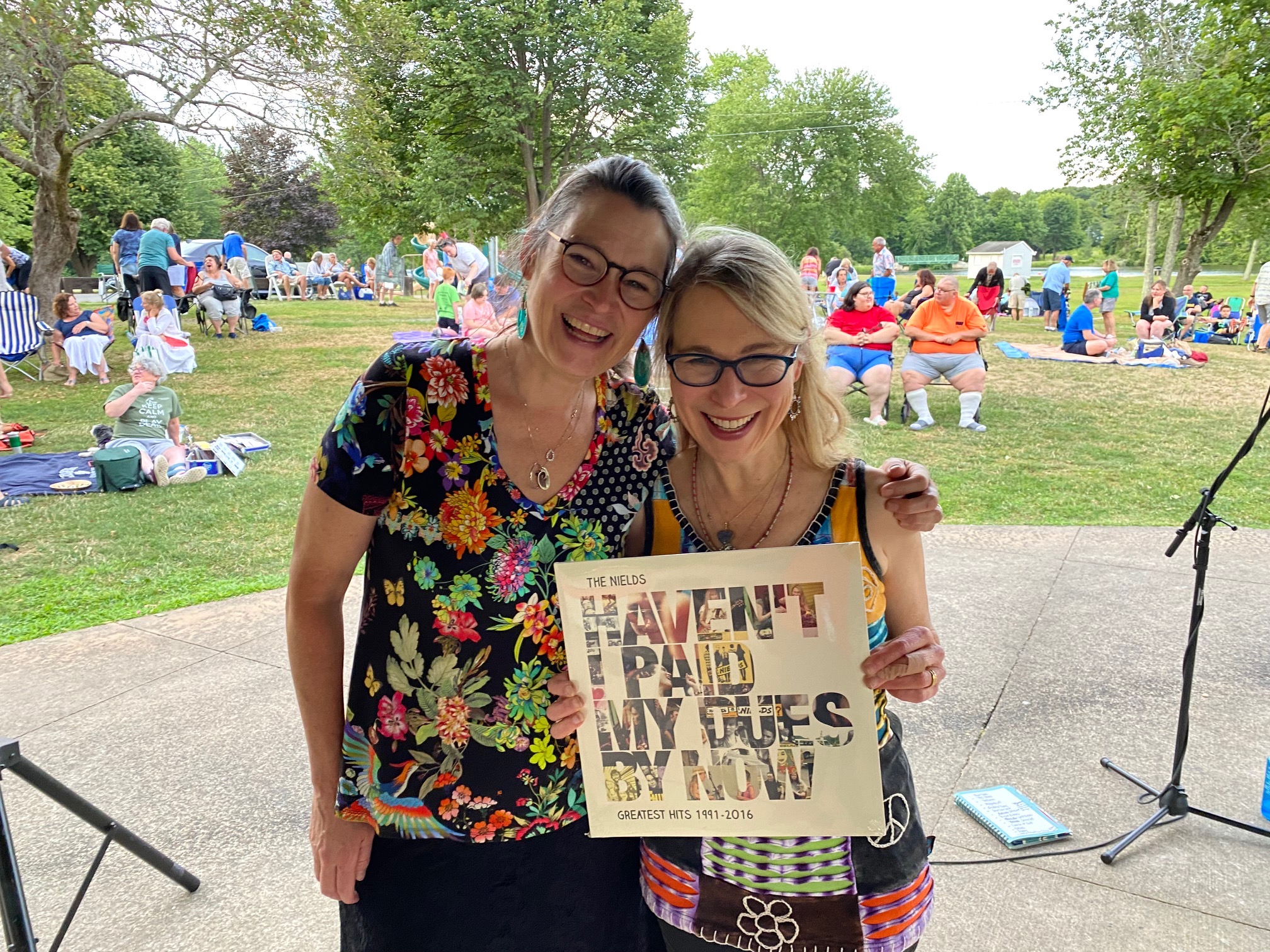 Have you ever had just one good day, the kind of day when you might even be foolish enough to hope for a brighter future than the one from which we’ve all been shielding our eyes? And do you take that kind of a day as a sort of invitation to hope?

After an amazing week which I will soon tell you about, I am back in Northampton, running my weeklong Summer Writing Camp. Here is a picture of my work station.

I’m working on my third novel, a bildungsroman about the characters who form the nucleus of the five-piece band The Big Idea. Right now, they are between the ages of 9-13 and they’re writing a musical based on the myth of Cronos and Rhea, brother and sister, and (because finding a fellow Titan to marry was challenging, given that they were all the children of Heaven and Earth) husband and wife—how, after the former swallowed the latter’s first five babies as soon as they were born, the latter tricked the former into not consuming her sixth.

The novel takes place in the ‘70s and ‘80s mostly, though it will end in the early 90s. The family, as you can guess, is musical, and the years are partly documented by their love affairs with certain albums and artists, the ears of my characters glued to the speakers of their record players to try to figure out whether it’s John or Paul singing “Do You Want to Know a Secret?” (It’s George). I’m stuck at the moment on a scene involving a dead body, and I don’t know how to get my characters to the spot where they find it. So instead, I’m writing to you, and I promise I have a point to make.

First, back to the good day. My sister and I were driving to our show at Mixville Park in Cheshire Connecticut, and the weather was classic New England late July—the time of year when the summer has matured, stopped hurting you and trying to prove its bad-assery, but instead mellowed into something sweet, the heat and humidity tempered into a gentle golden warmth that lingers into the evening. As we got off the highway, a number of good things happened.

See? If you were me, you too would start to believe that everything might actually get better.

The week continued to show us signs of grace and gentleness. We arrived at our hotel in Torrington to perform at the Falcon Ridge Folk Festival. Our parents, who weren’t able to come in person as they had for every summer since 2001 (not counting last year, when Falcon Ridge was only a one-day event), were able to see our main stage set, complete with Amelia Chalfant on bass and Lila Nields-Duffy on fiddle—our eldest children.

The next day, I found this within a mile’s walk from our hotel in Torrington: Batchy Brew, a coffee truck that made me a fabulous iced Americano.

We saw our dear friend Dar Williams. And welcomed to Patty’s agency the amazing Crys Matthews. Patty has been our manager since January 1998. Before that she was our road manager, and before THAT she was our booking agent, and we have never ever had a better booking agent than Patty. Her other artists are Dar Williams, Susan Werner and Heather Maloney. So you will understand when I brag that she has the best roster of any agent in folk music.

Speaking of Heather Maloney—whom I adore—we saw her recently (the day before the great day when things started to change—coincidence? I think not) at Patty’s dog Elphie’s first birthday party.

I asked Heather if she still sells CDs—since we are in the process of recording our 21st album and yet we sell almost zero CDs these days from the stage. Heather said not so many, but what she DOES sell is vinyl.

We made exactly one album on vinyl: the aforementioned 2016 greatest hits collection called Haven’t I Paid My Dues By Now. It’s a double album (natch) and we only printed a few hundred. (See above.) We still have some left. They move extremely slowly, which doesn’t surprise me as our fans are of the generation that drank the Kool-Aid about CDs being superior to LPs. I myself liked that CDs were harder to scratch and easier to clean, plus you didn’t have to rouse yourself to flip them halfway through. But I always did miss the beautiful, bold canvas of an LP cover. Revolver just isn’t the same at 1/8th its size. The “red album” was my most prized Christmas present in 1977.

Heather’s fans are young enough to have ignored CDs altogether, and being smart Gen Z’ers, they have zoned right into the superiority and durability of vinyl. I, meanwhile, have become numb to almost all albums, and this fact has made me extremely sad. I always thought the album the perfect medium to express an artist idea. It gave me room to explore a theme from ten to twelve angles. Like a photo album, it can represent a given year in one’s life, or it can act as a repository for a collection of images that work together in some way specified by its owner. It’s a record of one’s life, as fellow musician Shawn Phillips told us way back in the day. But do I buy albums or records or CDs anymore? Nay. I, like all the other denizens who have destroyed the music industry, subscribe to Spotify and Apple Music and listen to whatever I want whenever I want to. But that very ease of accessibility has the perverse effect of leaving me completely frozen and confused when I want to listen to music. If one can have everything, where is the specialness? There is no ownership to the new Willie Nelson album (a treasure) when it’s just one of millions of options for me to choose when I open my Spotify app. I end up defaulting to the most recent playlist I started making last spring. Not to mention that the artist had a plan when she sequenced her album. The first song comes first for a reason, but so does whatever song starts Side Two. On great albums, each song should relate to the others––thematically as well as sonically––in a way that is both logical and surprising. On the way to Falcon Ridge, I played my 16 year old Revolver (the British version) in its entirety. She was blown away. As well she should be. Each song leads to the next. When a consumer makes her own playlist on Spotify, there might be extreme care in ordering it, but just as often, artists are juxtaposed with others who clash with them. Songs in Bb are stuck next to songs in A. Wrong. Just wrong. And yet another way in which artists are disempowered by streaming services.

But why dwell on what we can’t change? Why not change what we can? When I got back from the festival, I dusted off my thirty or so favorite and most formative LPs, detangled my turntable from the horrible nest of cables in which it’s been ensnared, ditto the receiver, ditto the semi-working Bose speakers whose cables are scarily crude (just little wires that poke your fingers) and dragged these things out of their once-tidy stereo cabinet and into the kitchen, where they have received pride of place. Last night as I was making a massaged kale salad for my retreatants, I put on side one of Abbey Road. When “I Want You (She’s So Heavy)” finished, you know what I did? Flipped the album over and cranked “Here Comes the Sun” as loud as those little Bose speakers could go.

I have written all 14 songs, but now I have to record them and somehow present them here. Some are more challenging to do this with than others. Here is…