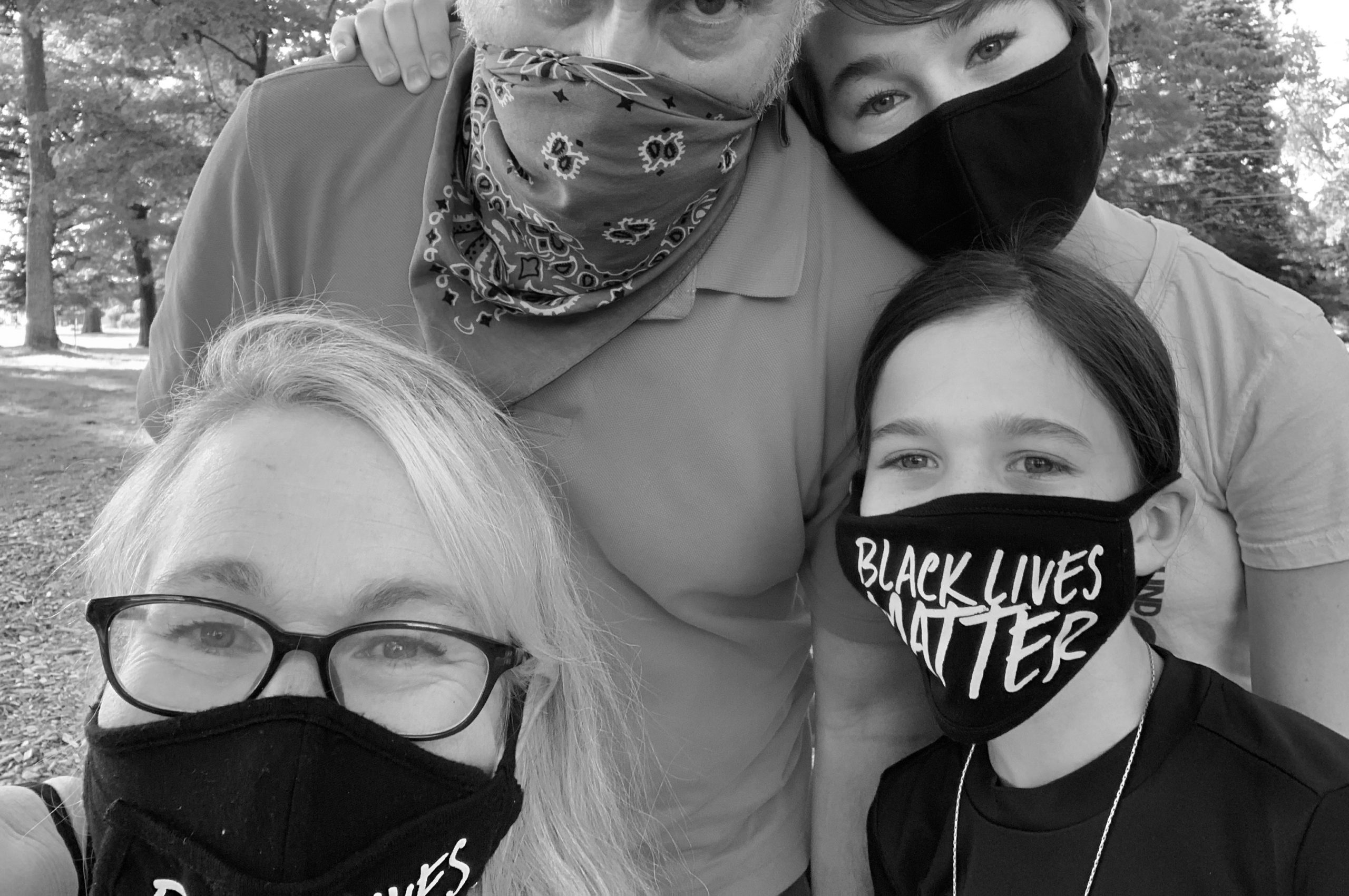 One day in late April, when The Mask Wars were just beginning, my daughter and I went for a walk in our park. Just as we were turning into our front yard, a massive Ford pick-up truck drove by, and someone in the truck yelled, “Take off your f’ing masks.”

If this had happened today, I might have thrown something at that truck, screamed at him for yelling at my thirteen-year-old child (I mean, who does that?) But back in April, I was mostly baffled. Why would a mother and child wearing masks elicit such rage?

Getting yelled at for mask-wearing was especially galling as I was trying to protect the passengers in that truck. This was an hour before learning that my COVID-19 test was negative, but I had had every symptom, from fever to dry cough to tightness in my chest and extreme lethargy. Readers of this blog surely know that we wear masks not to protect ourselves, but Golden-Rule-ishly, to protect others from ourselves.

At the time, I did what I usually do from my place of privilege and safety–I did a lot of work to forgive these mask-haters and tried to understand where they were coming from. We surround ourselves with the culture we choose, or the culture we’re born into. It’s easy for me to follow orders, I rationalized, because I come from a part of this society that makes the rules. I listen to scientists and I listen to authority, because––Republican presidents notwithstanding––those authorities have mostly told me truth. But this isn’t the case for the mask-haters, and it’s not been the case for Black, Indigenous and People of Color, either. White people lie, whether they are conscious of their lying or not. Some white people–those with money and status– genuinely think their leaders are telling them the truth; we don’t think we’re lying when we say that this country was founded by great and noble men, and forget to mention that it was also founded on an economy of theft and slavery. Less economically privileged white people know white people lie because they’ve been promised so much and given so little, and so they don’t trust authorities a wit. And BIPOC folks know white are deluded at best, deceptive on a regular basis, and devilish at worst–and yet, for the most part, you don’t see brown people getting into fights at Wal-Mart when an underpaid store clerk asks them politely to wear a mask.

I am a musician, and for thirty years my band traveled the country, performing in red states and blue states. I have always loved America the way I love my family. It’s complex, and I get exasperated with some of its customs and peculiarities and members. I struggle with the nation’s addiction to the concept of freedom––as in “it’s a free country” as one declines to wear a mask and protect one’s fellow free citizens–whom, presumably ought to have the freedom not to catch COVID and die. Seeing what I see in cities around the country, the police brutality towards Black people and People of Color, I want to stay in my relatively (mildly) woke college town and never venture forth again, pandemic or not.This country is not safe for too many of its citizens, and I can’t help but think that those truck driving “take off your f’ing mask” guys are really only interested in their freedom, their rights, their “don’t tread on me’s.” They are not interested in freedom for Black people, who are dying from COVID-19 at much higher rates than their white counterparts.

But deep down, don’t we know that freedom is itself a lie, based on a fantasy white settlers had when “discovering” this country and seeing how easy it was to take land from the indigenous people who lived here? How can we be free once we know the land we inherited is stolen? It eats at us. As my friend Steve Philbrick says, “This country kills black bodies, and it kills white souls.”

I think this is why the pickup truck yellers spin conspiracies about the virus being fabricated in a lab, that it’s a plot by lefties to take down CRAP (Current Republican American President–I don’t like to say his name). When one fantasy dies, the first thing we do is look for a new one. I should know–I have plenty of fantasies going that sustain me right now, like that the planet will heal because we aren’t flying, taking cruises or driving, or even consuming tons of useless detritus; that there will be a blue wave that defeats CRAP, Mitch McConnell, Lindsey Graham, Susan Collins and the whole lot of them; that we will soon have a Black woman president; that our government will put into place reparations for African Americans; that we’ll give back swaths of beautiful, fertile, American land to the original settlers of this continent. And that’s fine–we can dream, and we should dream: that’s how we conjure better worlds. But it’s better to speak up and out, to lift up the voices that have for too long been silent, to dedicate ourselves to telling the truth–whether it’s about the simple kindness of wearing a mask during a pandemic, or about the way the 13th amendment was twisted to incarcerate and exploit millions of Black men, women and children since 1866. In all things, we as a country need to hang together or die together. American individualism may be a myth we can no longer afford. Don’t you think, at 244 we might decide to grow up a little?

My eleven-year-old sat down at the table and watched as I placed a cheeseburger in front of him. Historically, this is his favorite meal, but last night, he looked up…