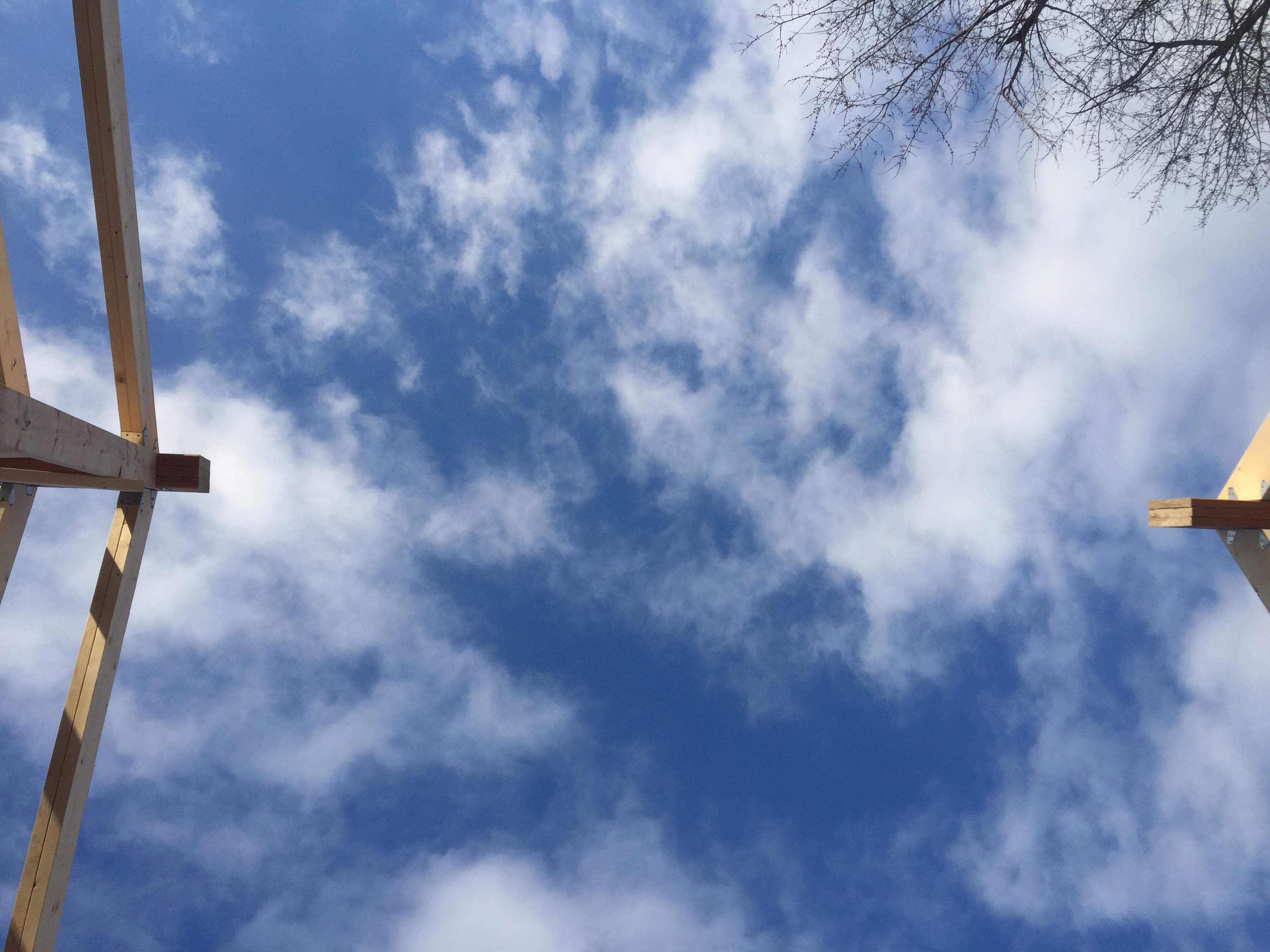 The space between the roofbeams

The roof beam is solid now, on the east and west edges of the house, but there is still no beam between the two ends. How the guys are going to manage this engineering feat is well beyond me.

I am re-reading Anne Truitt’s Daybook,  a journal/memoir kept by a Serious Artist in the 1970s, chronically her interior and professional life over the course of seven years. I was inspired to re-visit this writer/artist by my friend Heather Abel, whose recent essay “The Baby, the Book and the Bathwater” just appeared in the Paris Review. I had read Truitt’s memoir/journal when I was sixteen. My single-sex high school had put it on our summer reading list.

At first, I thought there must be two different books called Daybook, written by two different women artists. That’s how little I remember of my first read-through, some 35 years ago. What I remember is thinking Truitt was some kind of goddess. First of all, her prose was so different from the usual summer reading (otherwise entirely male authors). Second, she was an artist at a time when I knew I was some version of that strange creature. Third, I loved the idea of keeping a daily journal, of writing first thing in the morning. Years later, I see that this had an influence on me: from my mid-20s to the time I had two babies, I did my Morning Pages religiously. This blog is a remnant of that ingrained practice.

I am doing the Marie Kendo thing and taking all my books in the house, putting them in one room and deciding what to keep, what to give away, what to sell. What to send to Little Blue’s still-only-envisioned-shelves (see below).

The books are disorganized. I want all the fiction in one place, all the writing books in one place, all the astrology books….just kidding. But I am doing a massive overhaul, and seeing all the books in piles, with their faces up, brings quite a bit of joy, as well as memories. Nothing, other than music, brings me back in time like a physical book that I once held for the duration of a read.

In my Tuesday writing group, for prompt I played Truitt’s actual voice reading from the beginning of the audible version of Daybook. We all settled down to write. The usual quiet was disturbed by the sounds of loud male voices coming from the basement. I went down to investigate. The guys were taking a break from putting up the roof beams, eating lunch together, their jovial voices penetrating through the heating grates. I tried to match jovial and said, “Just so’s you know, I am teaching a writing class right now. We can hear every word you say, so be sure to say only nice things.”

“We love Nerissa!” they intoned, like school boys who had been caught. And then, “We’re done. You won’t hear us again.”

I returned to my writing, worrying that they hated me for silencing them.

Then I had some feminist whiplash. Wait a minute, this is my house! I am working right now! I was totally nice, and all I did was humorously ask them to keep their voices down! But in the middle of all that tangle, I started second guessing myself: my privilege, the fact that I am the Boss Lady whose extra house they are building, the fact that it’s snowing outside, etc etc. Whose rights? Whose rights?

Also, will I ever not have to analyze every single thing that happens through a lens of some sort?

Thurman was the lissome goddess in the creation myth of Harvey Weinstein and Quentin Tarantino. The Miramax troika was the ultimate in indie cool. A spellbound Tarantino often described his auteur-muse relationship with Thurman — who helped him conceive the idea of the bloody bride — as an Alfred Hitchcock-Ingrid Bergman legend.

Beautiful women have this Thing. It’s ephemeral–it only lasts till the woman is around 40, max, surgery and botox notwithstanding.  It’s also valuable; currency. Thurman was used for this Thing, along with aspects of herself that she gets to keep for her entire life–her smarts, her talent, her instincts. But her creative partners did toss her aside after Tarantino forced her into a Carmen Ghia with a stunt camera jiggling on the trunk, and made her drive it on a winding road at 40mph until she crashed the car and permanently damaged her knees and neck.

“When they turned on me after the accident,” she says, “I went from being a creative contributor and performer to being like a broken tool.”

As the snow falls, I am left with these thoughts about women and what it means to be a woman artist. How do we age? How do we let go of the part that society values, and continue to make satisfying art? It’s not as complicated for a visual artist or a writer. Anne Truitt’s book came out when she was almost 60. Betye Saar, Judy Chicago, Marisol Escobar are all seeing success in their late 70s-80s. But what about the performer? I have no illusions of being The Next Big Thing anymore. Folk/pop singers don’t pop after 50. For that matter, am I, as a consumer of music and films, guilty of participating in this? Do I find movies and recordings by aging artists as interesting as those by youngsters? (Well. I have to say I do now, because I am going through this passage, and I want to see how my peers are doing it. But I have to admit, I bought some of those 21st century Dylan records and Joni records sheerly out of loyalty.)

The guys are not here today, as it’s snowing. I have a long list of choices to make: which color for kitchen cabinets, which wood stove, which stones for the fireplace, which salvaged window for the loft space. Hooks for the bathroom. Toilet paper holders. Eco-friendly washer/dryer. Someone asked me if I was having fun. I feel guilty for saying no. I asked for this huge project, I am grateful to have it, and I feel devoted to it, as though it were my installation, my work of art. It is. If I were a man, would it be different?

That moment with the guys in my basement. It punctured a membrane. I want to talk to them. I want to explain to them that when one is a prey animal, as all women are to some extent, the usual rules of material position don’t necessarily apply. Women are inclined, unconsciously at times, to appease. You had gender on me, I want to say. Here, read this. And I would hand them Anne Truitt, hand them Heather Abel, hand them Maureen Dowd. But that is not the bridge that needs to be engineered now.

So after seven sick days, three doctor visits, a clear X-ray, a weirdly energetic weekend and a performance at the MLK, Jr Children’s Celebration, the boy showed up at Couchland…