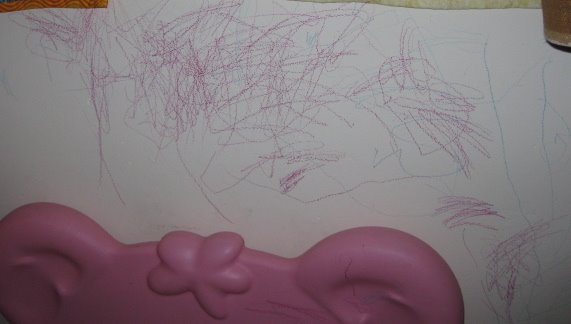 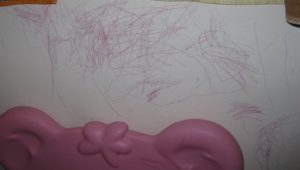 But I felt flummoxed about my response. Shouldn’t I tell her it’s not a great idea to draw on walls? What if she drew on someone else’s wall, like one of her grandmother’s? What if she thinks it’s okay to draw on her pre-school wall and the teachers yell at her and then call me up and yell at me? What if she draws on the walls when she’s at a play date?

I come up against this question of when to put on the tough parent act a lot. I had dogs for years before I had kids, and I always imagined that parenting would be somewhat similar to dog training. “No! Bad kid!” Or “Lila, come!” You give them treats when they do what you want and you ignore them when they don’t.

Not so easy. (And I’m certainly not claiming that I was a dog whisperer either.) By the way, George, though a therapy dog, is actually not that well-trained, or else he has lost some of his training. Or perhaps his training has holes in it. Like for example, he doesn’t come when he’s called. Also, when you take him out, he pulls and yanks and sniffs and growls at other dogs. He does sit, give you his paw and lie down for short periods of time, but then again, so did every dog I ever had. But he is really nice and as I have said before, his very presence seems to lower our blood pressure. And he is an excellent listener. He plays his role as family therapist with much humility and grace.

Tonight, Lila and I were coloring together before the writers came over for our writing group. Lila and I were making a card for her grandparents, thanking them for their hospitality over the weekend in Virginia. We had spent Saturday outdoors in the beautiful new spring, with the forsythia glowing like torches in the midday sun. My mother and Lila were planting sunflower seeds and my father was pruning a butterfly bush. I was nursing Johnny and letting him crawl around, trying to prevent him from eating too much dirt. Johnny is so delicious right now that I swoon whenever I see or smell him. He put his chubby little arm around my neck and with his other hand picked up the mother-of-pearl on my necklace and put it in his mouth. I had sniffed his head and taken in the whole glorious moment. There is nothing I love more than watching my parents interact with my kids.

Anyway, we were drawing together tonight, Lila and I. She was asking me when she could draw with Sharpies like Mama as opposed to the washable Crayola markers she was using.

“Yeah,” she said. “But when I’m a big big girl and can draw with markers like Mama, I will still be Lila.”

We kept drawing quietly. As with George’s presence, the act of drawing and coloring calms me down more predictably than almost anything else. I have been thinking a lot lately of the Brama Viharas. They are: loving-kindness, compassion, sympathetic joy and equanimity. These days, like never before, I view them as worthy ideals–perhaps the most worthy ideals–to strive for. When I was a little girl, I had a grandmother (Lila’s namesake) who never, ever lost her temper. She was a walking demonstration of the Brama Viharas. People called her a saint. Every morning, I would wake up and think, “Today I am going to be like Grandmother. Today I will be nice no matter what! I will not lose my temper or be mean to Katryna!” and by 10am I would find myself in a fist fight with my sister, or a grouchfest where I was off somewhere sulking. Why was it so hard to be like Grandmother?

Over time, it became easier to be nice, and I’m sure in my thirties–my single thirties–I blew through many days being a calm, loving/kind, sympathetically joyful compassionate person. It’s not so hard when most of your relationships take place on the phone or on-line. But try sharing refrigerator space (or yogurt) or attention from the various family members (like your husband), and pretty soon, my teetering toehold on the mountain of enlightenment slips and tumbles before I am even aware I am falling.

Nevertheless, today I set my intention not to lose my cool all day, and so far, it’s worked. I got many pieces of advice recently, from several sources all saying the similar things:
1. Be well rested. You are almost doomed to parent poorly when you are too tired.
2. Don’t try to get the kid on your schedule. If you schedule yourself too tightly, you are asking for disaster.
3. Your kid needs to use you as if you are his or her nervous system. His/her own nervous system is too immature to regulate itself, so you are it. Therefore, when your kid is really wired and up, even in a cute, fun, great way, balance it out with mellowness. And likewise, if your child is down, that’s the time to pick up the energy, have a kiss-fest, send in the clowns.
4. If your kid really loses it, empathize. Say, “You seem so sad/angry. I know this must be very hard. I am here.” And put your arms around the child and hold him/her.
5. Tantrums are totally natural and normal and most kids have them at this stage. Your kid is not a tantrumming kid. Your kid is a kid. Period. Treat him or her as normal and don’t get freaked out.

And perhaps because I’ve been more aware and awake, and perhaps just because of some developmental quirk, Lila hasn’t had a tantrum in a week. I know I haven’t seen the last tantrum, but it’s been wonderful to have my sweet girl back so consistently.

“What picture in your room?”

“The one you did with the crayon?”

“Yeah.” She looked a little confused. “Let’s not erase it, okay, Mama?”

“Well,” I said. “It’s not really a great idea to draw on the wall, Lila. People don’t always like that. But I have to say, your picture was really great.” And I leaned in and whispered conspiratorially. “I say we keep it.”

“I say we keep it,” she agreed. Then she squinted her eyes and pointed with her index finger, her fist scrunched up next to her cheek. “The picture in the kitchen is not very pretty, so we can erase that. But the one in my bedroom is pretty so we keep it.”

“Okay, my love,” I whispered back, kissing her cute little artistic face. “I won’t.”

In five years, maybe I will redecorate. (Maybe. I kind of like having a house full of messy kids’ art projects.) In the meantime, I’m going to see the crayon drawings that appear around the house as gifts; as teachers to remind me to practice equanimity in the face of the creative force that can’t be reigned in. Also, I will make sure my kids use washable markers and keep my Sharpies in a box on the highest shelf.

And if you ever need a spontaneous smile, watch this:

“Faith is the bird that feels the light and sings while the dawn is still dark.”-Rabindranath Tagore In case your child ever breaks a compact fluorescent bulb and it shatters…

Twelve Days to the Wedding

“There is nothing good or bad but thinking makes it so.” So says my friend Bill by way of Hamlet. Or, put even more elegantly by Bob Marley: “Emancipate yourselves…

I Have Cleaned My Attic and Solved My Book! There is Still a Squirrel.

I have twenty-two minutes to write this post before my babysitter leaves. Then I have to get my kids ready for soccer and eat my dinner and hustle up to…