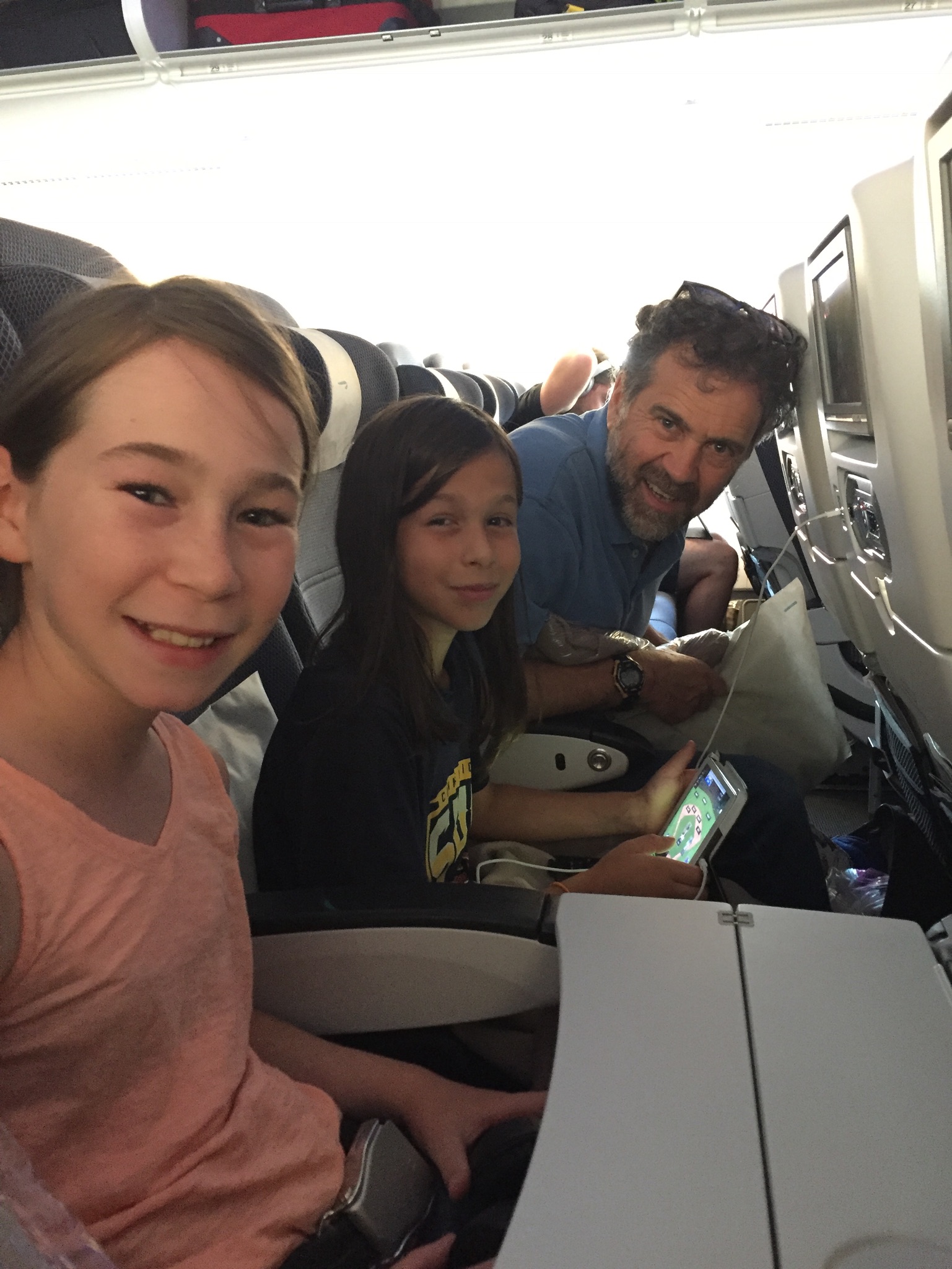 Here I am on a giant two-decker plane, squashed at the end of a bank of four seats with my daughter asleep on my shoulder, my husband reading next to her, and my son watching Boss Baby at the other end of the row. I arrived at the plane with an assortment of travel pillows and accoutrements attached to my backpack, giving me the look of a Sharper Image-thieving hobo. Said pillows were for my aching lower back. Why the aching lower back? So glad you asked!

My lower back started aching the day I arrived home from my Adirondacks writing retreat on July 2. There, I was finishing the latest draft of my novel The Big Idea, something I have been working on for the past 5 months (previous drafts being written since 2005…) Trying to take a day off this endeavor on not be a manic workaholic (who, me?) on July 4, I accompanied my family to Chesterfield Gorge, where I was embarrassingly lethargic and miserable. “My left leg feels as though it’s climbed a gigantic mountain,” I told Tom. “And my lower back feels like I’ve pulled out my S-I joint.”

Five days later, at the New Bedford Folk Festival, I seemed to develop poison ivy. Strange to get it so long after exposure, but I was pretty sure I saw some in Chesterfield, though I’d tried valiantly to avoid it, of course.

On the Monday after the festival, I plunged into another week-long writing retreat, this one at my house. I stuck to a boot-camp-like schedule: rising at 5:30 to meditate, going for a run at 6, getting the house clean, the lunch prepped and the kids off to camp by the time my retreat started every day at 9am. I worked and wrote all day, then spent the hours between the end of retreat and dinnertime going to a variety of body workers to try to re-align my S-I joint, all the while slathering the PI in calamine lotions. Neither situation got any better, and my checking account grew as cranky as my back. What was particularly weird and annoying was that the location of the PI was in the same spots that ached. This, I reasoned, was because I must have rubbed Hudson, my puppy, right after he rolled in some backyard PI and then massaged my back and left thigh because they hurt.

Finally, it was Sunday, and I got worried that my PI needed steroids. I wanted to get a script before I left for Europe on Monday, so I called my PCP. He said it was protocol to examine all rashes in person. Thank God. Because when I went in on Sunday afternoon, my doc practically laughed me out of the office.

“That is a textbook case of shingles, my dear,” he said, pointing to the line of what I’d thought was poison ivy along the very spot on my lower back that hurt the most. “And that is where it starts: the spine. From there, it spreads only to one side of the body. in your case, down your left leg.”

In a way, it is a relief to know that I haven’t destroyed my back. When I thought this was a pulled S-I joint, each bodyworker had some advice for me, usually about posture and exercise. I went around sucking in my gut, re-aligning my shoulders, making sure not to sleep on my stomach, etc. I felt guilty for pretty much everything I did; mostly of course for the fact that I am writing a novel, which is the major source of all maternal guilt for me at the moment. Now I feel like I have a reprieve from the governor on this. When you have a communicable disease, mostly no one blames you, including yourself. Of course, I did see on WebMD that the reason most adults get shingles (a reappearance of the dormant chicken pox virus) is that their immune system is straining under unusually stressful circumstances. But for now, I can accept that I won’t be sleeping tonight. Who sleeps on a red-eye anyway?

We have decided to get a dog. Before you take the trouble of logging in to tell me how this goes against everything I wrote about last night, about working…

FAWM #4: I Just Want to Spend the Day with You

Wrote this on the plane coming home from Florida after we spent a lovely couple of days there with my parents. This song is supposed to be from the POV…