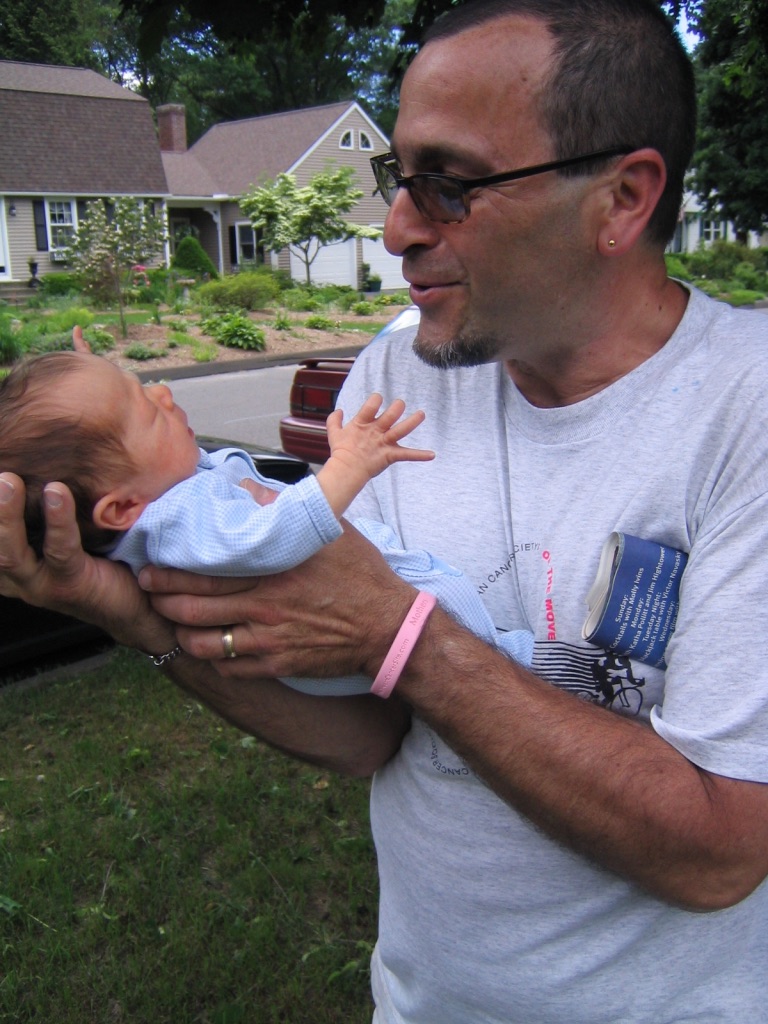 I fell in love with running writing groups eighteen years ago because of a man named Michael Biegner, and if it weren’t for his brilliance, humor, warmth and friendship, I probably wouldn’t still be running writing groups today. Michael was a poet, husband, father, spiritual seeker, cancer warrior, hiker, biker, champion of others, lover of words and images, creator and enjoyer of food, and many other things. He was my student, my teacher, our son’s godfather, but most of all, our beloved friend. An anam cara, to use the John O’Donohue term for Soul Friend. (John O’Donohue is just one of many poets Michael introduced into my literary canon.)

Michael signed up for my very first writing group in the fall of 2003. I was newly divorced and had just bought a too-big-for-just-me house in Northampton. In order to make the mortgage, I needed a source of income beyond my meager musician’s salary. What could I do that would allow me to write as much as possible while continuing to tour with my band? Having been in a wonderful local AWA (Amherst Writers and Artists) writing group, I figured that I might like to lead one or two of my own.

Michael arrived on that first night, full of smiles and chatter about his wife Christine and their four children. After the eight writers had gathered in my living room, I gave them a prompt. We started writing in near-silence for about an hour; some folks took the rocking chairs, others reclined on the couches, and some hunched over my dining room table. Presently, the space was full of purpose and portent; I could practically feel the walls of my old Victorian absorbing the creative energy of these eager, curious, intrepid writers.

When I called time, everyone read their freshly-minted pieces aloud. Michael read a new poem, and my jaw almost fell to the floor. I wish I had my notebook from that time so I can see what I jotted down about my first Biegner poem. I know I regularly scrawled across the top of my notes “Other People’s Stuff! DO NOT STEAL!”

I always wanted to steal Michael’s lines. But they were so firmly grounded in his own unique voice, they would have sounded false in mine. The other writers in the group adored his poetry as much as they adored him. I fell in love with this weird new job of mine because of some spirit that entered that room along with Michael. Maybe it had something to do with his infectious championing of others. Perhaps I was demonstrating it, too; perhaps we kindled it in each other. Regardless, I understood, from that Holy Spirit via Michael, how to make community grow.

Michael called the group his “church and psychotherapy all rolled into one.” At weekend retreats at which I cooked dinners for the writers (we prepared special vegetarian dishes for him), he dubbed me “Nerissa Neruda” and my husband “Thomas Tomato.” In group conversations, he neither directed nor monopolized; instead, he finessed, asked questions of others, shared his personal insights, welcomed and included the newcomer, laughed generously.

He loved literature; wrote a novel one year, got his graduate degree to teach High School English, encouraged us writers to go on field trips to hear the poets coming through Smith College’s wonderful Poetry Center. When Tom and I got married, he wrote a poem for us which he read at our wedding. As I became pregnant, gave birth, nursed, got pregnant again, gave birth, nursed, he told me that my children would be my best and most unforgiving teachers. “They will find your buttons,” he warned me. “And then, they will push them! They will somehow know EXACTLY just how to get under your skin.”

Shortly after Johnny was born, Michael and Christine brought us a meal. I recall spending most of the evening on the couch, as Tom, little Lila and the Biegners sat around the dining room table. I was still passing birth matter, a fact with which I must have felt comfortable sharing with my guests. Was it normal to see blood clots the size of a plum four days after giving birth? I was terrified, but having had four children, they were simultaneously unphased and reassuring. I think it was on that night that I asked them to be Johnny’s godparents.

Shortly before I’d met him, he’d had the heart attack that set him on a course he would follow for the rest of his life; one dedicated to his own health and to that of the planet. He ate mindfully, and made sure to exercise vigorously every day. Once, Tom and I went hiking with him over the Seven Sisters mountain range that rims the southern edge of the Pioneer Valley. A good ten years older than I and five years older than Tom, Mike left us in the dust. When Michael had a cancerous kidney removed, the writing group showed up at his hospital bedside and we all wrote together around his bed. He proudly showed off his scar.

He worked for a company that made beautiful art papers and journals, and at least once a year he would arrive like Santa Claus, carrying piles of samples for the writers in my groups to take home. What writer doesn’t need paper? he’d say. He and Christine, and sometimes one or more of his musical kids, came to our once-frequent pot lock/singalong parties, bearing large bowls of good food to share and excellent song requests. In fact, I often made Michael the “caller” at the party––as in “Michael, call out the next song!”

I was furious when he told me about his diagnosis in 2014. Aggressive prostate cancer? No. Just no. Lots of people I knew and loved had had prostate cancer and had beaten it. It wasn’t fair that Michael shouldn’t do as well as they had, or better, given how hard he worked at his health. Given how many people needed him. “Tell the doctors that too many people can’t imagine life without you. I can’t imagine a world without you,” I told him tearlessly, completely unwilling to believe what he was telling me. “And so I forbid this to happen. I refuse it. You can’t die.”

“Sorry,” he told me with his characteristic half-smile. “You are going to have to figure out a way to live without me, and you will. They all will.”

He meant his wife and kids. The Biegners are one of those large, enviable families in which everyone texts each other on a common thread. To be a member of this tribe means to have a constantly vibrating phone, an external reminder of all the life there is between one’s connections. He was always forthright with them about his odds, which were never good. “Sooner or later, the treatment I’m on will stop working. Then we’ll look for another treatment. But at some point, the PSA numbers will just keep going up. The cancer will learn all the codes.”

I wanted him to discipline his mind into some kind of positive thinking New Age-y trance to beat the cancer, but he refused. “If there is one thing I can still give to my kids, it’s going to be this: to show them how to enter this last great mystery with honesty and courage.”

The truth is he did take advantage of every treatment possibly afforded him to prolong his life. He wanted to live for his grandchildren, to walk his youngest daughter Emily down the aisle, to welcome his son Stephen’s second baby into the world. So though he might have eschewed a kind of “I think therefore I am cured” mentality, he bravely took on any clinical trial he qualified for. This winter, though, we learned that he had chosen to stop all treatments, as there were no reasonable options left and the chemo was becoming unbearable. The family transitioned to a home hospice structure. I cried when his wife told me, and within an hour I found myself on a four-way phone call with him and two other writer friends from my groups. He joked with us, reassuring us that “rumors of my demise are greatly exaggerated,” and calmly told us his wishes. He wanted us to read poetry to him, aloud. He gave us a list of his favorite poems, and it was extensive. The writers who knew and loved him made selfie videos of their readings, and we collected them into one hour long video. I am told that he listened to us read to him on his last day on earth.

He wanted us to write a poem after he died, based on the clock time of his death. “When I take my last breath, I want someone to record the exact time, and use that in a poem somewhere.  I need to mention that to my poet friends.  In that way, the echo of my breath at least will be recorded for posterity.  That is something, isn’t it?”

The deeper that sorrow carves into your being, the more joy you can contain. Is not the cup that holds your wine the very cup that was burned in the potter’s oven? And is not the lute that soothes your spirit, the very wood that was hollowed with knives?

When you are joyous, look deep into your heart and you shall find it is only that which has given you sorrow that is giving you joy.

When you are sorrowful look again in your heart, and you shall see that in truth you are weeping for that which has been your delight.
-Khalil Gibran

Don’t ask me to revere
The moment your breathed your last
Don’t ask me to carve any deeper
Because I refuse to believe in a world
In which you are not.

I knew you just fine
From a gulf of eight
Or maybe ten feet.

Content to be
Two minds, each delighting in the other
Two smiles within a circle
Of poets swimming in a sea
Of poetry and never getting wet.

Even your suffering
Seemed containable
From that perch.

Refuse to acknowledge your last breath
Until the wailing of others
More literal reached my stubborn ears.

If I write this poem,
Will it bring you back?

If I write this poem
Will you visit me in my dreams––
Skinless, whole, merciful?

And if you do,
Will I even recognize you
In the ex-mother-in-law
Who shows me the book she has written of her life
––Red font for the parts we shared––

Or my once-best-friend,
A casualty of college,
Beckoning me to follow them
Down a winding stair?

Am I going to have to revisit all my dead
Before you darken my dreams?

Or am I just mistaking the gardener
Once again, so many distressing disguises.

My sister Katryna sent me this video by the incredible Bengsons, which perfectly describes what grief is, how it feels, how it carves so deep into you that when you can finally access your joy again, it shocks you with its beauty. I wish––how I wish––I could share this video with Michael today. He would have loved this. Maybe he already does.

Those Years on the Ship