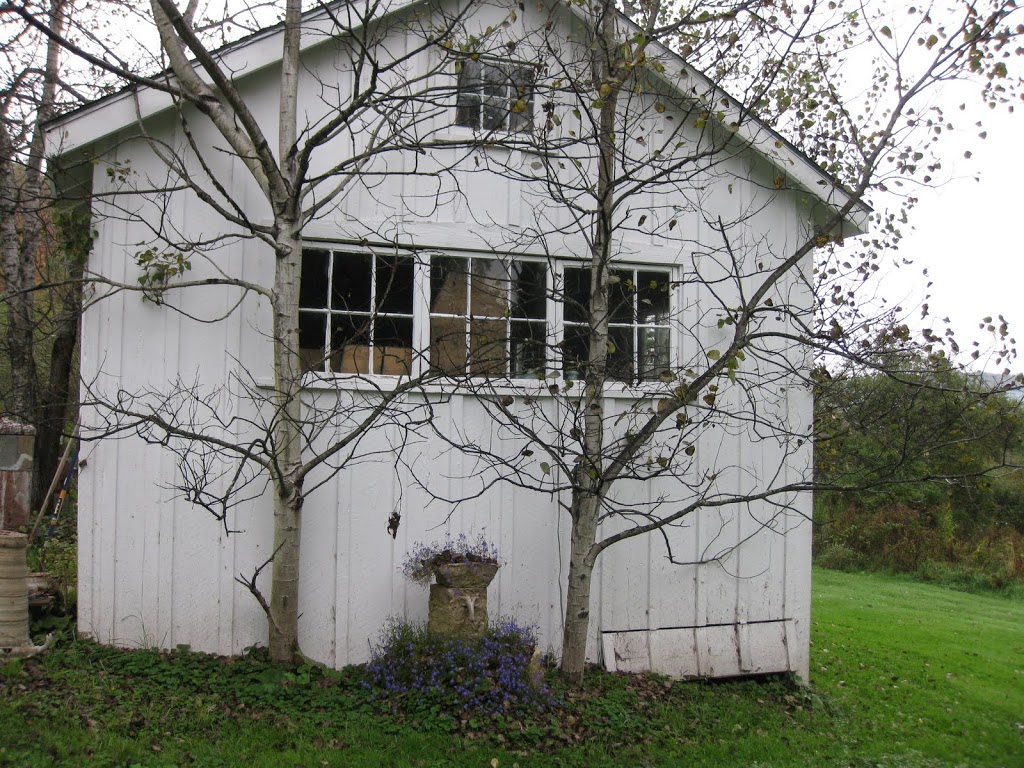 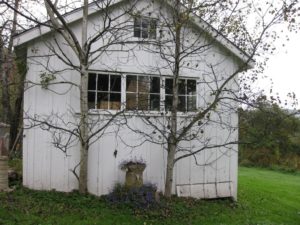 “Oh I was always afraid. but I never let it stop me. Never.”-Georgia O’Keefe

A few weeks ago, back when it was still warm in the mornings, I started out on my daily run. I was fiddling with my iPhone trying to find a satisfactory podcast to listen to, changing my mind, changing the volume, looking for the place where I’d left off. By the time I’d settled on a story and was ready to pay attention to my run, I was well into the park across the street from my house. I lifted my head to take in my favorite part of the route–the crest of the first hill, after which it’s downhill for awhile–and I found myself staring into the eyes of a black bear.

In all truthfulness, the bear was a good twenty yards away in a copse adjacent to the path, but he definitely met my gaze. The one thing I know about black bears is that when you encounter one, you should not run lest they think you are a meal worth pursuing. So I slowly turned and attempted a saunter out of the park. I almost bumped into a red Saab. The driver rolled down his window and said, “That bear just followed you into the park! I was watching him, and I thought I’d better follow you in too. He walked right past you into those trees over there. Do you want a ride out?”

“No thanks,” I said, as the one thing I know about strange men in cars is that you should not get in with them. “I’ll just leave now.” And I did. I ran for twenty minutes on the streets of Northampton, circling my park and keeping an eye out for more bears. Because it hadn’t occurred to me before, but of COURSE there were bears in the woods! Northampton is replete with bears, and we had one on our porch last fall (which I wrote about here.) Why wouldn’t they choose to frequent the park? If I were a bear that’s where I would go!

The next day, I ran into the park, right past where I’d seen the bear. I can’t say I wasn’t afraid, but I knew that if I let my fear win, I’d lose something crucial, not the least of which would be my beloved route.

I’m not always brave like that. Fear is a funny emotion, and someone who is brave enough to join the army might not be brave enough to speak in public. Someone who is brave enough to confront her boss on a tough issue might not be brave enough to get through an evening without eating a pint of Ben & Jerry’s. As I wrote last week, I’m just beginning to discover that part of my inclination to start (and often finish) hundreds of projects, take on several careers simultaneously (musician, writer, life coach––hey, maybe I’ll be a yoga teacher! Maybe I’ll go to Div school and become a minister! etc, etc) is a way of not facing the truth about where I am at with some of these projects. If we had sold a million CDs, I would not be career-hopping. By constantly jumping from one project to another, tossing my little fledglings out of the nest and then immediately hatching new ones, I am shying away from my own disappointment.

When we first started out, we encountered a cadre of older folksingers, mostly men in their fifties, who were in charge of or participants in the open mic nights we frequented. Some of them were really kind to us, encouraging and friendly. Some others regraded us as young upstarts and talked about us behind our backs, dismissing us as pop (which we took as a compliment) and fleeting (which we refused to be). There was a lot of bitterness in the way they talked about their “almost made it” moments and in the way they proclaimed their has-been status. The bitterness frightened me, and we vowed never to succumb to it (“I drink the drug of hope/With my breakfast/To ward off bitterness.”) One way of combating the potential bitterness is to never acknowledge disappointments, to always spin them in a positive way. We have become masters of the silver lining, queens of making lemonade out of lemons.

But there was a lot of disappointment, too.

This past weekend, we drove out to Walton, NY to perform at the majestic Walton Theatre, an old vaudevillian venue. It was a great drive; a beautiful autumn day, the views full of crimsons and golds, greens and blue blue sky. Katryna and I brainstormed about our creativity retreat (the theme will be “I Want to Be a Woman Like Me,” which is a line from our song “Georgia O” and Katryna will take a portrait of each participant. We will write, paint, draw, make paper mache bowls with favorite quotations, do vision boards, and of course, sing….) We got to see our aunt Elizabeth, a potter from nearby Gilbertsville, staying up way past our bedtime to reminisce and laugh with her.

But five minutes before the show, I peeked through the velvet curtains. There were a scattering of people in the old theatre, none of them familiar (besides our aunt). Sometimes when this happens, I just ignore it, move forward, do the show. That night, I felt like crying.

“There’s a lot going on tonight!” the promotor reassured me. “Homecoming, fall weekend, blah blah blah.” I still felt like crying. Katryna gave me a great pep talk which I only heard afterwards: “It’s amazing that 100 people paid so much to see us! We need to play to the people who are here, not the people who aren’t.” Still, I felt deeply disappointed. But then I remembered that I was trying to feel these things in general, and that feeling was good, even bad feelings. So I turned to Katryna and said, “We are brave! Lots of folksingers would have given up long ago in the face of dwindling numbers, but look at us! We’re still doing this!”

Brave or stupid, one might say. But I didn’t say that. I still felt like crying for the first two songs and couldn’t say a word to the audience. Then I got into my body (best trick ever) and did the breathing thing. The third song was “This Town Is Wrong,” which is about two girls who leave the town that doesn’t understand them to pursue their dreams of being musicians. I almost laughed. I didn’t laugh, but I didn’t want to cry anymore, and from that moment, I fell back into my groove.

Earlier Saturday, I had taken Elle to her first Suzuki “concert.” I will have to write another post on Suzuki at some point. The whole experience was fabulous. But what I want to say here is that the kids, all between the ages of 3-5, played many many different versions of “Twinkle Twinkle Little Star” and not much else. Earlier today, Jay was playing with an electronic toy that had the tunes to “Old Macdonald,” “London Bridge” and “Twinkle Twinkle,” and without really focusing on it, I kept noticing how superior a tune “Twinkle” was to the other two. I had the thought: “Wow, Mozart wrote his greatest hit at the age of 4. He died penniless in a pauper’s grave. It was basically all downhill from age 4.” Now of course, I don’t believe that. But in a certain frame, one could see his life that way, instead of recognizing that in between “Twinkle Twinkle” and the pauper’s grave he wrote some of the best music the world has ever heard, and incidentally forever changed Western music. (Which reminds me of a distinction my fellow MB life coach Pam Slim made to me the other day: if you have a problem with the word “fame,” try “reach” or “impact” instead.) We put our stuff out there, and the world judges it and renders a verdict. It’s up to us to either believe it or ignore the judgements and just keep creating for the joy of creating. 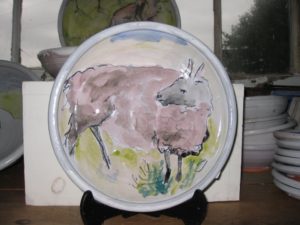 Elizabeth is a great example of the artist who creates out of the sheer joy of it all. She lives in a kind of potter’s paradise which she and her late husband Roy built together in bucolic western NY, and she weaves all sorts of strands through her work: family, food, sensuality, elephants, spirituality, nature, architecture, mythology. She approaches individuals and art with so much spaciousness, compassion, good humor and optimism that to spend time with her is to be similarly infected. She lives with great relish, and her art reflects that. She is going to be 70 at the end of next year. Her work is better, richer, more colorful, deeper, more fun, more serious, more wonderful than it’s ever been––and I have always been a fan of her work. She is not living in fear that someday she will be a has-been. She always has a new set of pots to discover on the wheel.

And I bet she’s not afraid of bears, either. 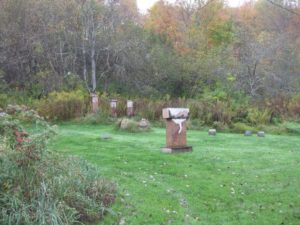 The Nields-Duffy house is a veritable house of virus currently. Elle’s teacher is in the hospital across the street with H1N1 (maybe-she’s being treated for it but they can’t diagnose…

Waiting for Spring, and Thoughts on Little House on the Prairie

The other day I got a most alarming message from my gmail account. In a glaring red box at the top of my gmail page, I was informed that I…