“Wanna Be a Star Then Suffer” 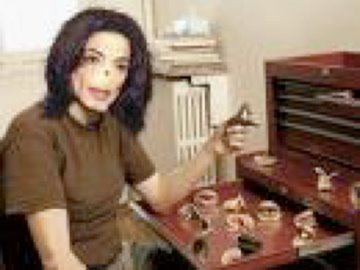 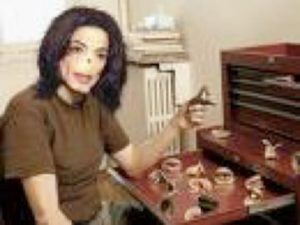 I made my song a coat
Covered with embroideries
Out of old mythologies
From heel to throat;
But the fools caught it,
Wore it in the world’s eyes
As though they’d wrought it.
Song, let them take it,
For there’s more enterprise
In walking naked.
-William Butler Yeats

I can’t stop thinking about Michael Jackson. I know I’m not alone in this, though I have so far avoided most of the pipelines of infotainment that hurl tidbits, stories, photos at us about the now deceased King of Pop. My main sources of media are NPR, the New Yorker and the New York Times, so I know that Jackson had to pay royalties to the African pop singer Manu Dibango for “borrowing” his phrase “mama se mama sa ma ma coo sa” for “Wanna Be Starting Something.” 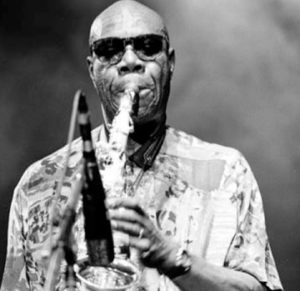 Other than that, those three sources of media aren’t giving me what I really want to know, which is why that perfection of a child turned into a perfectionist who turned his razor sharp powers onto his own body and mutilated himself, and (perhaps) harmed other young people along the way. Also, like the rest of the world, I am fascinated with his three kids, and I want to know all the stuff enquiring minds want to know, like what was he thinking when he dangled his baby off a balcony (this clip was shown about fourteen times on CNN and MSNBC last Sunday when I was trying to enjoy some cable TV in my hotel in Durham while I was on the road and away from my own children for the Eno Festival. I can’t believe how exciting the promise of cable TV always seems and how unsatisfying it always ends up being.)

Michael Jackson’s seems to be a cautionary tale to parents everywhere: do not exploit the talents of your child! Do not tell them they are ugly! Do not wince when the boys’ voices start to change, ushering in the end of those pristine golden soprano notes and your own golden nest egg! (“Just look over your shoulder, baby! Ooooooo!”) And would that he could have turned his overly critical eye onto his music and come to the same conclusion WB Yeats did in 1912: that it would be better to walk naked than to tarry with those who had turned his songs and himself into mythologies. Would that he could have loved himself––his true self.

Speaking of mythologies, today, I felt like I’d stumbled into one of the early fables about the Buddha. On our walk home from school (yes, she started school!), we came through the park and paused to enjoy the beautiful day. I let Jay out of his stroller and he climbed up my leg, took my hand in his left hand, and with his right, reached for Elle’s hand. The three of us walked a good fifteen feet––by far the farthest he has traveled on his own little pristine soles. Elle pointed to a tree she wanted us to hang out under, and we sauntered over. I smelled a strong odor and hunted around until I found the carcass of a squirrel. Elle ran right over and said, “Mama, what’s that?”

“That’s a dead squirrel,” I said. I resisted the urge to grab her away from it and instead let her come close and examine it from about three feet away.

“I don’t know,” I said, though it looked as though it had been mauled. There were flies buzzing around it, and as I said, it stank.

A few moments later we passed by an extremely old woman sitting on a park bench with her daughter, who was also quite old. The two of them admired our children and it turned out the old woman’s son (the other woman’s brother) had the same name as Jay. “So this little one will be a world famous neurosurgeon and all-around wonderful guy too!” the younger of the old woman squealed. I smiled and agreed, though I don’t care so much about the neurosurgeon part.

And then we saw an old friend of mine whose arm was in a splint. She’d broken her collar bone, she told us, as we stopped to chat, but Elle couldn’t get it out of her head that she’d broken her arm, and I didn’t bother to correct her. We didn’t see a beggar, but other than that, we pretty much got the tour of the “four passing sights” the young Siddhartha Gautama witnessed on the outing his father had famously tried (and failed) to choreograph into being free of the suffering of humanity. Like the Buddha’s father, Jackson’s dad, for perhaps different reasons, wanted his son to stay a boy. Don’t all of us parents have a little part of us that wants to keep our children innocent children forever?

I didn’t think too much of this coincidence until tonight, when, while putting Elle into her crib, she interrupted her nightly “Story About My Day” right around the part where we’d eaten breakfast to ask, “Mama, why do people die? When are we going to die? I don’t want to die. I don’t want you to die.”

“Oh, sweetie,” I said, hugging her and stroking her hair. “Everybody dies.”

“Does this crib die?”

She was silent for a moment and the sound of an ambulance siren punctuated the evening. “No,” she finally said, shaking her head as if to say, “silly.” “Cribs don’t die. But do amimals?”

“Yes, they do,” I said as gently as I could. “It’s too bad, but they do. Everything dies eventually.”

“I know. I don’t want them to either. But here’s the thing: there are a couple of ways we don’t die. One is that when we die, like that squirrel that we saw? We kind of melt into the earth, little bit by little bit and become part of all that is. And the other thing I believe is that we all have a soul, which is the part of us that is aware and the part of us that loves. It’s the part of me that loves you no matter what. And that will never ever ever die, sweetie. That part is part of God, and God doesn’t die, so that part of you won’t die either.”

She liked this. “The part of me that loves you won’t ever die!” she shouted. “And Jay, and Daddy, and George Harrison, and my stuffed amimals and my blankies!”

We cuddled some more and she said, “Mama, how do you break your bones?”

“Huh? Oh, like Maria?” [Our friend with the broken collar bone].

“Yeah. How do you break your arm?”

“Well, sometimes by not being careful enough, or having an accident or something. We try to be careful, but we can’t always help it. And if you break a bone, it’s okay. It usually heals pretty well. But it’s good to be careful.”

“I’ll be careful, but sometimes I’m not careful, like when I fall on the ground.”

“I’d say you’re pretty careful. But we still have to watch Jay, because he’s just a baby and he might fall and hurt himself if we’re not watching him.”

“You’re probably right. But still. That’s why we close off the stairs for him.”

I kissed her goodnight and we made a date to have breakfast together the next morning. And then I came down and wrote some more about Michael Jackson. I think the reason I’m so consumed with thoughts of him (besides the fact that I can’t get “Beat It” and “Rock With You” out of my head) is that he represents the ultimate in fame and stardom, a path I once thought I wanted to pursue. Then again, when I was fifteen, I thought “Wanna Be Starting Something” was “Wanna Be a Star Then Suffer,” which as it turns out was prophetic, if not for Jackson, certainly for myself.(Calling Dr. Freud…)

The Buddha taught that life is suffering; that the cause of suffering is the constant wanting and grasping state of mind; that there is a way out of suffering and it involves the Eightfold path which is a middle way between excessive consumption and complete self-denial and asceticism. I’m no Jackson expert, but just from passing by the tabloids in the supermarket I can see that he seemed to vacillate between both extremes: the Neverland Ranch on the one hand and anorexia on the other. To see him, even still images of him, in later life was to see a haunted person. His face, in my mind, is the quintessential face of suffering.

And yet, the world did take his coat and has worn it and will continue to wear it. I downloaded “ABC” and “I’ll Be There” and played them last week for Elle as we drove up to church. She didn’t like “ABC”––she prefers the several versions of alphabet songs she already knows––but as the first notes of “I’ll Be There” sounded in our car, I said, “This one’s sort of a lullaby.” She listened for a few bars and said, “Mama, I want you to sing this song to me before I go to sleep.”

And right afterward, “Rock With You” came on. She sang along with every single lyric of the chorus, right on tune.

There’s something preternatural about the clarity of a child’s voice singing adult lyrics, something eerie about hearing my own daughter singing along with the post-adolescent Jackson juxtaposed with the school-aged Jackson whose vocal talents pretty much define the term “preternatural” (and who was singing pretty mature lyrics, too, I might add.)

I closed my eyes and said a prayer right there: “God, please bless these children––all the children–– and keep them safe from the evils of the world. But may their protection rest inside of their own sweet little selves. May they find that inner strength, because there are not walls high enough to keep it all out: the tabloids, the carcasses, the concepts of mutilation and––yes––the sex offenders. Just be there with these children. Let them know You are present. Let them know they are not alone.”

If you should ever find someone
new, I know he’d better be good to you
cause if he doesn’t, I’ll be there.
-Berry Gordy, Bob West, Hal Davis, and Willie Hutch

Maybe “I’ll Be There” is an appropriate sentiment after all.It’s a pretty generous description of unconditional love. I just wish Michael had felt it for himself.

In Defense of Reading Harry Potter

One day in early August, our babysitter arrived at the usual time, and as I was handing Lila to her, along with Lila’s tofu, wild rice and cheese, she said,…