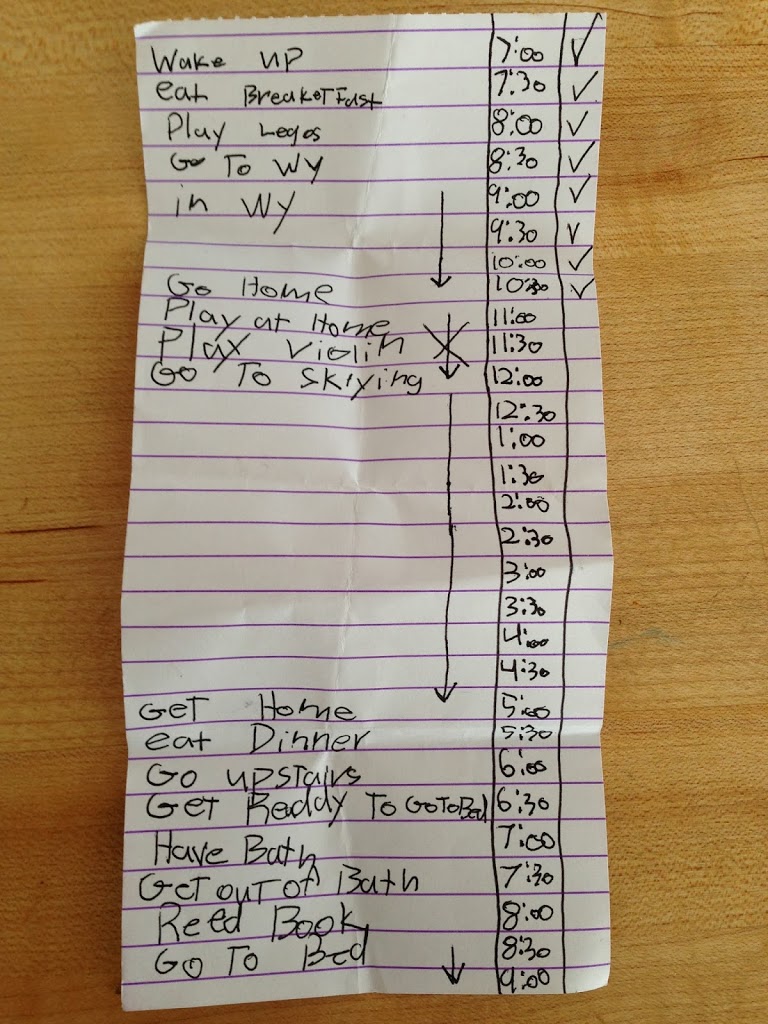 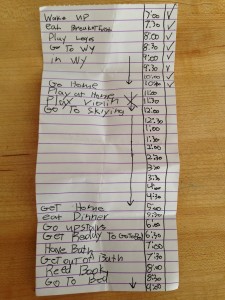 You can surmise the apple does not fall far from the mama tree. I got up this morning at 6, did some yoga, then meditated, then counseled a friend on the phone, then cuddled my 5 year old, made him and me breakfast, then made my daughter’s breakfast, then tidied up, did violin practice with the kids, then cleaned the house, ran to the Y, lifted weights, ran home (all while listening to my audiobook), led a phone meeting, ate lunch while listening to NPR on my iPhone to try to figure out what is going on in the Ukraine (now I kind of have an idea, which is better than yesterday), then sent out a dozen emails and texts that ranged from the personal to the familial to the various businesses and classes I run. Then Patty (my manager) and Katryna came over and we had an hour meeting to figure out booking issues, and by the time it was over, I had to pick up the kids from school. I took them straight to the corner supermarket to get bananas and milk and to the post office where I sent a friend a CD copy of my demo of new songs. Then I dropped off Jay at a playdate, took Elle to her violin lesson, talked to a friend who has a rare stage 3 cancer about her chemo treatments, picked Jay up from the playdate, scooted home with the kids, made them dinner, ate dinner, played ten minutes of piano, and here I sit in my writing group, writing prose for the first time in a month.

Our prompt today is a poem called “Let Go. Return” by Josephine Johnson, from 1937. In it she writes:

Then may it be said of you:
Behold, he had done one thing well,
And he knows whereof he speaks, and he means what he has said,
And we may trust him.
This is sufficient for a life.

I am queen of building gilt shacks for every seed. Did this woman worm herself into my head and speak to me from the grave, reaching her hands out to grab my ankles the way Pip imagines the dead might treat his sinister nemesis Abel Magwitch in that first chapter of Great Expectations? For this is my midlife crisis, right here: I am in danger of letting my barn fall down because I am so busy tending to every little gilt (guilt) shack. And which ones really merit my attention?

On the way back from the violin lesson, Elle said, “I didn’t know T had cancer.”
“How did you know she did?”
“I eavesdropped on you.”
“Ah,” I said. “That is a good skill to have.”
We drove for awhile. She said, “When did she get cancer?”
I said, “No one knows when exactly, but she was having trouble breathing, and they found out about it around Christmas.” My eyes welled up a bit. I had just told T how brave I thought she was, and she said, “You’d do the same thing. I mean,” and here she had pointed at Elle who was on the floor playing with the violin teacher’s baby. “We don’t have a choice. We can’t just roll over and die.” T has two young daughters. I said now, to Elle, “We need to pray hard. Not that that always works, but sometimes it does. And we need to be really nice to her kids right now. And I am going to be really mad at God if we lose T.”

Elle paused. Then from the backseat: “It’s not exactly God’s fault.”

Part of the problem is that the barn, as I saw it, was the music I created with my bandmates. The music is obviously my life’s work, even as I can neglect it dreadfully for months at a time. This past month, I did not neglect it. I spent the whole month of February writing songs, 14 to be exact. Well, really 13. One was a duet of Katryna singing “You’ve Got to Walk that Lonesome Valley” with Siri, the iPhone voice over.

My big contribution to that number was to immortalize it on my own iPhone and post it on Facebook. But I did write 13 whole other songs, some of which are pretty good. And what was great about the experience was that I don’t even care that much if the songs are good or not, or if I’ll record them and put them on my next CD. I now remember how to write songs, and I have confidence that I can. February was like spring training. I’m ready to play ball now.

But like so many mothers I know, I also feel that my “real” work is my family: nurturing my relationship with my husband, and the day-to-day mothering of my two children. I spend much of my energy (as demonstrated by my big list) on keeping the machine going, that contraption that feeds, clothes, transports, amuses, bathes and grooms and educates and snuggles my children. And on many occasions, that other barn (for I won’t, certainly, call this a gilt shack) seems directly at odds with the first. Which barn gets the attention, the small improvements? How can I chose which beam to straighten when they both need fresh wood? How can I chose which one thing to do well?

Well, for one thing, let’s simply acknowledge that Josephine Johnson wasn’t writing at a time when women could, from a practical perspective, raise two barns. But in the age of Hillary Rodham Clinton, Nora Ephron and Cate Blanchett, to name just three career moms among countless others, I think it’s fair to say that many do, nowadays, build two barns. (Men as well as women.) But perhaps I don’t need to build fourteen. Maybe I can let some of my smaller projects be just that: smaller projects. Pete Seeger’s death reminded me that my true calling is still, and always will be, conveyer of song to a group, however humble that may look. It’s a ministry calling, every bit as dramatic as Jonah’s. We don’t get to choose where we get sent. I might prefer Telluride Bluegrass Festival, or the Grammies to the parking lot of River Valley Market, but I am a singer, and as Pete said to the HUAC, “I’ll sing for anybody.” We singers can only hope, as Dickens might say, to be beams of God’s grace, shining on all alike.

Back in the car, I was struck by Elle’s lucidity. I don’t know if agree with her, theologically. I have read When Bad Things Happen to Good People, and I am intrigued by the idea that since an omniscient God cannot co-exist with an all loving God, we need to choose which we believe. I haven’t come down firmly on either side, and I suspect, still, that God is somehow all loving and omniscient, but we humans can’t possibly be expected to take such a long view. Still, I said,

“You’re right. I agree with you, actually.”

“I don’t like when people blame God,” Elle said. I turned to look at her. She’s seven, now. She wears, daily, a fuzzy plush vest of tiger stripes with a tiger hood, and on top of that an Adidas windbreaker. Her eyelashes are so long I sometimes can’t believe they’re real, that she’s real, this elf-like child of mine who can go from regular silly kiddo to wise-beyond-her-years sage on a dime’s turn.

“Neither do I,” I concede. “Thanks for the reminder.”