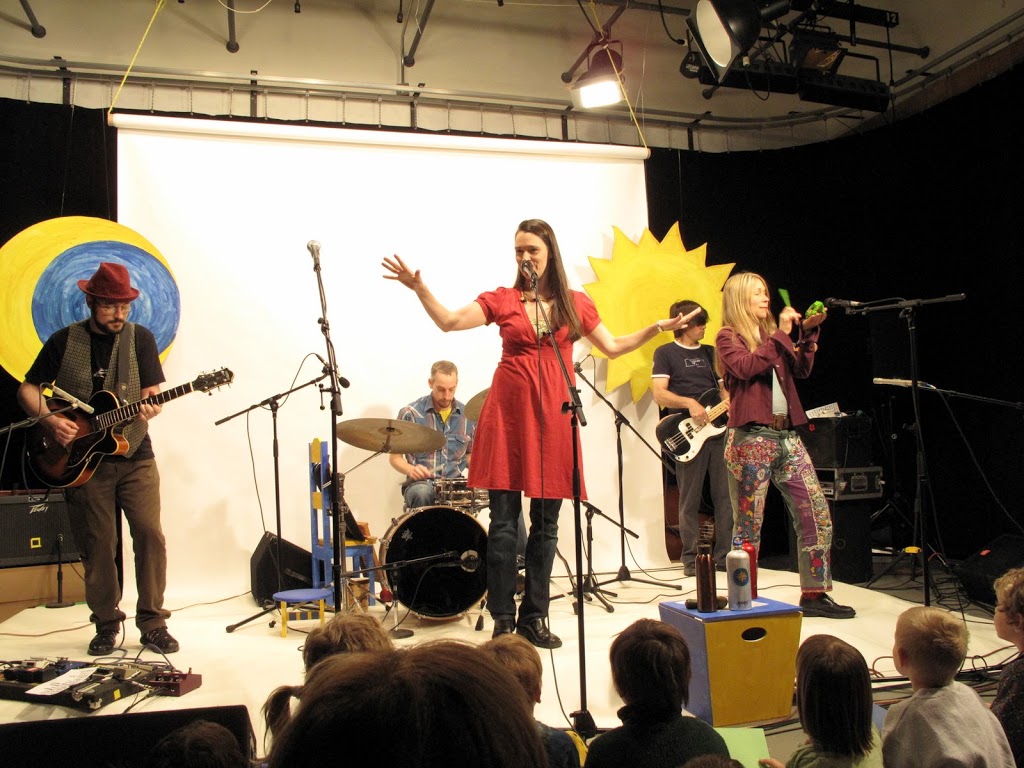 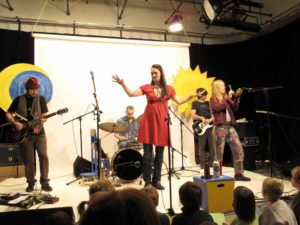 The Nields and their CrackerJack Band at the University of Hartford TV Studio recording their Family DVD on May 2, 2009. Photo by James Levine.

I am reminded today about the essential dilemma of every would-be mindful mother on the planet: it’s hard to fully appreciate the miracle of a healthy, delicious breastfeeding baby while simultaneously trying to clean your house, write your yearly birthday letter to your daughter, get said daughter ready for a playdate, and figure out in what order to do these things: change baby’s poopy diaper, feed baby some much needed solids, call the doctors about yearly check ups, call the exterminator about the (large!) mouse that has made several appearances in your kitchen, oh, and finish an extremely tattered book proposal. There is so much to do and the requirements for management of a household–even bad management–– are legion. And require forethought, which to my mind is kind of the opposite of staying in the moment. Though I may be wrong about that.

And yet, Elle’s birthday, which was yesterday, brought to mind in such a fierce, stark way, the truth, which is that these kids are growing up so fast it makes my teeth hurt. I am aware that I may only be breastfeeding this sweet, delicious boy for a short time (I plan on breastfeeding until at least kindergarten, but he might have other ideas. Most babies in our family seem to self-wean around 2.5). I am aware that with each passing day, Elle’s vocabulary grows by leaps and bounds, and while I applaud that (literally), it makes me sad that she now says, “More” instead of “mur” and “hospital” instead of “hostibal.” Yesterday her cousins gave her a hand-me-down bike with brand new training wheels, and her uncle informed me that she took off right away, with virtually no learning curve. Later in the day, we pedaled over to the farm, and as cute as she was in her bike helmet and as awesome as her little pink and purple bike is, I felt some grief that the tricycle days are over. Already!?

Meanwhile, Jay really is skinny, and now for the first time I am worried. Tom and I both noticed around the same time, which was yesterday. This coincided with us feeding him on and off all day long. In one day, he consumed three jars of babyfood, about half a box of “Purely-O’s”, some Italian crackers, all of Elle’s portion of sweet potato, and copious amounts of breast milk. Perhaps he is exercising his new tooth, which no one besides me believes exists. But that’s just because no one else is willing to stick their fingers into his mouth and feel around his gum line. I feel it clear as day, and I can see it in those rare seconds when he keeps his mouth open long enough for a viewing. It is a translucent little promise of future chewing power. Also, he is a cruising machine, which is probably why he’s suddenly so hungry and skinny. When he is awake he is never still. When he is supposed to be getting his diaper changed, he is practicing his impression of Harry Houdini, and when he is left to his own devices, he is doing crawl laps around whatever room and climbing on top of anything he can find to mount. Including but not limited to the dog and our laps, which is really cute.

So yesterday I postponed Elle’s party, which was a good move since both she and I were way too tired and cranky to be social with anyone besides Katryna’s family (and we weren’t that cheerful with them, either, though we were very grateful for the visit and the bike.) I spent the day playing with her, and when she woke up from her nap, as I said, we put Jay in the front pack and biked over to the farm in search of Molly the Donkey. Last Saturday we filmed our DVD at the University of Hartford and I am not sure I will ever recover from the stress. Actually, it was not that bad. I assuaged my fears which I discussed in a previous post by buying a tube of Preparation H which is purported to cure the dreaded Eye Puff (which I was dreading.) (Everyone in my family, including Tom who is technically not related to me, suffers from particularly sensitive eyes which turn puffy at the mere suggestion of soy sauce or less than 8 hours of sleep per night. Even Jay and Elle get Eye Puff. But don’t worry, I promise not to daub them with Preparation H.) As it turned out, I was having a good eye day and didn’t need it, but just the feel and weight of it in my knitting bag was enough to calm my fears. 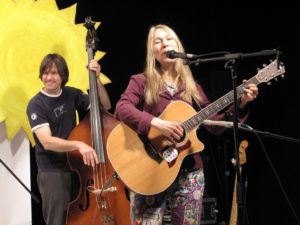 Speaking of knitting, here is the finished Pillow Face Cat. 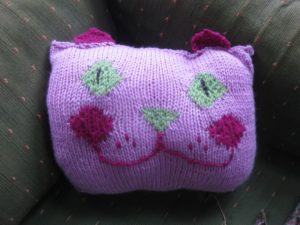 Elle has been most appreciative. When she unwrapped it, she gave a little gasp and said, “My very own Pillowface!” She hugged it and then said to Jay, “This is very special to me. I’m not going to share it.”

I am glad Swine Flu has turned out not to be the horrifying terror we once believed. I myself was mostly scared because I thought the injunction to wash hands obsessively would lead to the end of the world as we know it as the result of dried-up water supply and deforestation (all those paper towels). Also, I feared no one would ever come to any of our shows again. Nonetheless, we were unable to find Molly the Donkey at the farm because all the barns were locked. As the result of Fear of Swine Flu.

Finally, back to that large mouse. I say “large mouse” because I am optimistically hoping it’s not really a rat. The evidence which rodents leave behind (like that euphemism? As if I’ve never said “poop” in this blog) is, in this case, rather huge. I bought those little tone thingies that are supposed to deter rodents by making a high-pitched sound, but all they did was annoy me (I can most definitely hear the high-pitched sound which is purported to only bother rodents and not dogs or people) and there was even more scat on our counter the day after we plugged them in.

Forgive me, Lord, for I must kill. Or ask Minuteman to do my dirty deeds for me.

Stacey from Hertfordshire is desperate to be crowned star baker, which is why she is sitting on the floor in front of her oven holding its door shut with her…