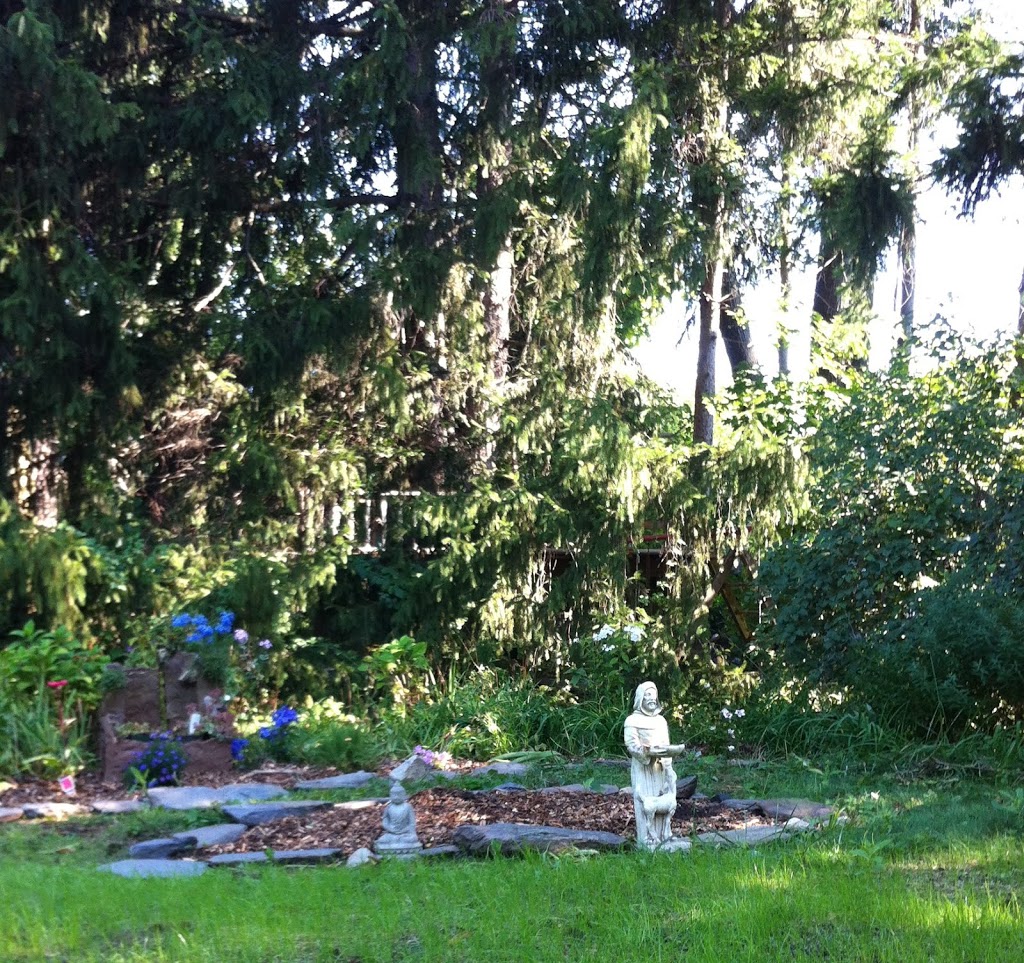 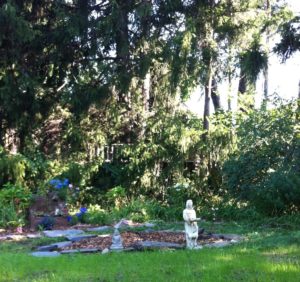 I look out at my garden these days and drink it in, knowing that by Saturday morning it will likely be gone. All that work in September. Worth every bit for these morning viewings from the couch in the new kitchen. St. Francis in the foreground, Kuan Yin in the back. But still, it breaks my heart that in a few days the pansies and impatiens will be gone forever, and the cone-flowers and hydrangea will wilt and brown.

Jay has had four violin lessons and one group class. It’s so strange to see how different two children can be. After years of telling friends that my kids were more alike than not, as violinists at least they show their proclivities. Elle’s bow-hold was right-on from the start; Jay grabs his fat marker in his fist and doesn’t comprehend that one does not wield it like a sword. We are supposed to be clapping out each of the six Twinkle variations to our new teacher’s words, but Jay wilts after one-half of one, where Elle dashed ahead, graduating from her Twinkles in less than nine months. I take his fists in my two hands and tap them together for claps, but he says, “Dis gives me a stomach ache.” And more painfully, “Dis is my body and I get to do what I want!” Who can argue with that? 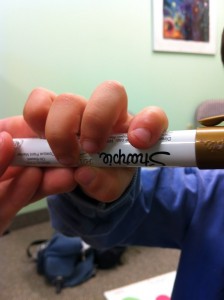 In Paul Tough’s new bestseller How Children Succeed (which I am supposed to be reading but haven’t started yet, but I did listen to half the This American Life piece about it) he argues that the skills most necessary to teach kids are self-control, to learn to focus attention, and to delay gratification. The exercises our teacher gives us are all about these skills. We start with a bow in which Jay says, “Good morning” or “Good afternoon” or “Good evening,” depending on what time it is. We listen to the Suzuki Slow Twinkle CD and clap along, as I said above, and we listen to the Twinkles up to speed while he sways back and forth, his feet in playing position and his box violin on his shoulder. Then we do “Up Like a Rocket” with his pen-cum-bow and his bunny bow-hold. He wants to make up his own lyrics, but his teacher insists on hers. Delay gratification. He wants to make his pen go horizontally for “back and forth like a choo choo train,” but his teacher makes him keep it vertical. Self control. He ends each practice with “Thank you for the wonderful lesson,” and a bow. Nothing to complain about that. It’s teaching him good manners.

So why is this all so hard for me? Because he doesn’t always want to do any of it, and I feel foolish, frustrated, helpless, and most of all like a Tiger mom. A failed Tiger mom at that. We set up his foot chart (a 20″ cardboard with construction paper cut outs of his feet positions) and it can take 20 minutes for him to get in rest position and bow. Before he can do this, he has to fall on the floor a few times, balance on one foot and go, “Whoa! whoa!” and wave his arms around, ask for a drink, decide he has to pee, take off his shirt, roll up his pants legs, look out the window to see if Gulliver the Cat has come over, look out the window to see if his dad has biked home yet, set up his favorite cars to watch the practice, go get his ducky to watch the practice, count the marbles in his marble jar and then fall on the floor crying and insisting he hates violin and never wants to play again.

And we haven’t even picked up the actual violin. 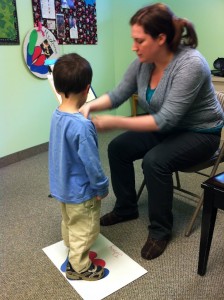 Elle’s teacher Emily Greene says that whatever you are dealing with in terms of family dynamics will come out in the violin practice. As an author, and a teacher of writing, I notice that whatever is hard for me in life is hard for me on the page, and so it goes with my students. If a student doesn’t know herself, it is hard for her main character to be known. If a student is impatient and in a hurry, her scenes will skim by. If a student is fluent in the language of emotion but slow to take action, her scenes will be rich studies of humanity but lacking plot. And if a person cares more about being liked and well-thought of by teachers and other authority figures (but not little boys) and is the tiniest bit afraid of confrontation, violin practice sessions can turn into the Clash of the Titans.

Today I wised up. I looked at what we were being asked to do and decided to do exactly the minimum amount needed to make both of us feel like we had some kind of productive practice. Jay can’t make it through even one Twinkle, either in the swaying exercise or the clapping one. Our teacher doesn’t know this because I haven’t told her. Instead I have brought her practice sheets covered with stickers (and let’s be truthful: the stickers are for me, not Jay. I am the one who puts them on and gets a big hit from seeing them taking over the yellow lines of the paper.) But I will go in on Thursday and tell her we need to slow down, even though progress seems snail’s-paced to me as it is. And this morning, I got down a shaker of non-pareilles which I used to bribe him to do each item on our practice sheet. I had Jay bow, do one Twinkle variation for swaying, one for clapping and his “Up Like a Rocket.” It all took five minutes. I hugged him and praised him and he bowed deeply. “Sank you for a wonderful lesson,” he murmured.

He may or may not continue with the violin. He may be a perennial or an annual. What matters is that he get this space each day, this moment of my full attention and love (which includes structure, boundaries, firmly holding the line) the way I have my moments with the pansies and St. Francis every morning.

Like last month’s ground hog, I am poking my head up from the depths of winter to see if it’s safe to come out. Today’s thaw saw me abandon my…

What It Means to Do Work

I am sticking my head up for a moment to say I am here. We are playing two shows in NYC area this weekend: Friday at Rockwood Music Hall on…