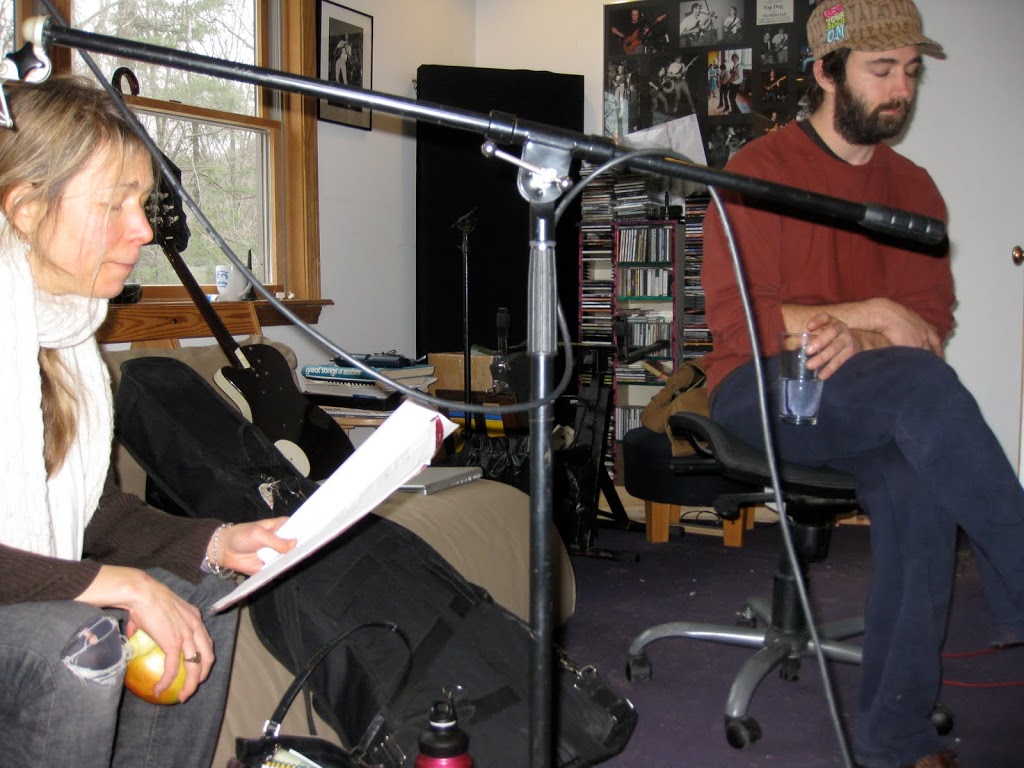 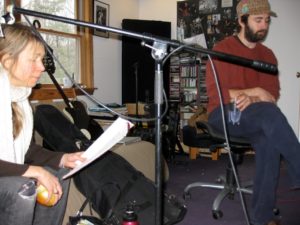 Two weeks ago, we recorded three tracks (“Full Catastrophe,” “Last Train Home,” “Back at the Fruit Tree”) with a new drummer, Zak Trojano. He plays with Peter Mulvey, among others, which is how we met him. 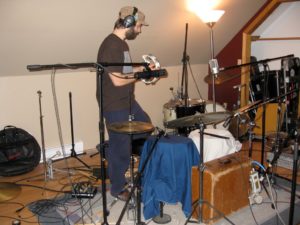 Check out how he plays an old suitcase as a kick drum!

Today, I played Dave and Katryna a new song I just wrote called “FInd What We Were Missing.” Also, Amelia, aged 8, played her father’s new Hofner bass and showed us that she can give Paul Kochanski a run for his money on the bass part to “Goin’ To Boston.” I slammed down some guitar and vocals for “Back at the Fruit Tree,” and it was so much fun that I begged Dave to put the Hofner on right away so that we’d have one track pretty much finished. We need Katryna’s vocal now, but the “illustrated” version is done. We’re also going to have Keith from Stephen Kellogg’s band do some piano on this. Yum yum yum. I love layering background vocals almost more than anything in life. It’s like painting.

Also worked on today: my vocals for “Full Catastrophe” which Katryna will ultimately sing most of the lead on. Also, my final lead vocal on “Which Side Are You On” and demos for “Find What We Were Missing.” Then Dave had a cool idea: me playing my very primitive piano on “Fear The Gap,” a la “After the Gold Rush.” It ended up being my favorite thing we worked on today.

I still want to write another song for this CD, even though we now have 13. Maybe because we have 13. Who wants a 13 song album? Katryna started a song called “Ten Year Tin” and I have some ideas for that. This week I will write it. After all, it’s February Album Writing Month, and though my priority has to be our book, I can’t resist a challenge and a deadline.

Tomorrow: two radio interviews and our show at Stone Soup in Providence. Meanwhile, Elle has pink-eye and Jay has a mysterious rash. He sings the ABC song all the time now, and also “Go Go Go Go for G.” Elle sounded out the letters to “S-T-A-R-B-U-C-K-S.” We may rot in hell for this.

It’s September 21, the last day of summer. I woke up surrounded by thick clouds, but already they’ve cleared. Where did they even go? When told that Katryna was going…