Photo Shoot for The Full Catastrophe 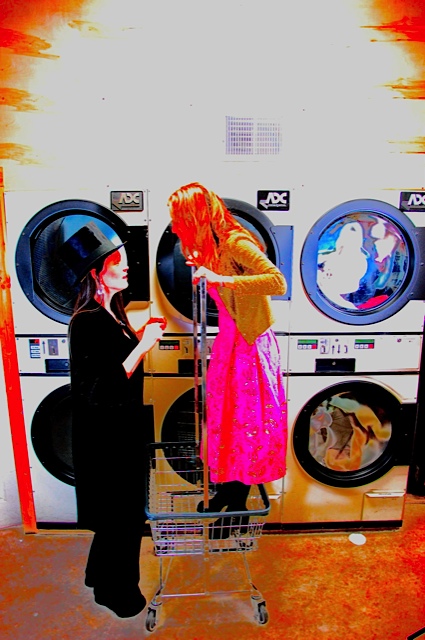 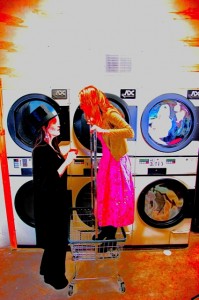 Last week, Katryna and I had to do a photo shoot for our new CD, The Full Catastrophe, which against all odds is finally looking like it will be finished. We started making this CD in December. December 2009. There are songs on it that I wrote in the Bush administration. Since starting production, my kids have graduated from schools, become potty trained and verbal, learned to ride a two-wheel bike and one of them can now play violin better than I can play guitar.

I hate photo shoots more than almost any other aspect of my job–even more than traveling, even more than playing to a room where we almost outnumber the audience. I hate photo shoots because I feel fake, holding a smile when I am wondering if I am going to have that look in this shot: the one where I look like someone next to me just announced that Democrats should be put in jail for making consumers buy compact fluorescent bulbs–but quick! Smile, because this is the picture we’re going to mail to cheer up someone’s sick grandma for Christmas in Seattle! I hate standing around. I hate the part where Katryna thinks of something clever, which translates to me looking foolish. 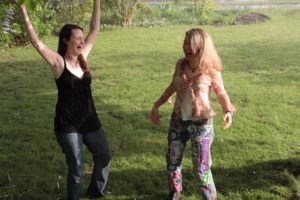 And recently, there’s been another wrinkle. That is, wrinkles. 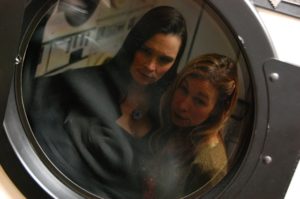 Present at this photo shoot were photographer Kris, our manager Patty, our friend Liz and another Patty who is a hair stylist and beautician. Kris kept saying, “Neriss, it is not torture!” Patty #2 kept saying, “Nerissa, relax your brow! When you’re tense, all your wrinkles show!”

And I’d demonstrate. In order to unwrinkle my brow, I had to lower my eyelids so dramatically that I looked like that blue dog in “Huckleberry Hound” who rode the elevator and said, “Going down, sir?” 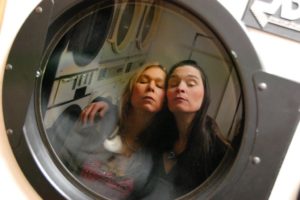 I seriously wondered if I should have gotten botox for the shoot.

Our one-time manager Dennis Oppenheimer told us never ever ever, no matter what, to tell our ages. He said, “Just say you’re in your twenties. And when you turn thirty, just keep saying you’re in your twenties.” We followed his advice until we turned thirty. Then we told everyone when our birthdays were and enjoyed the cards and presents. 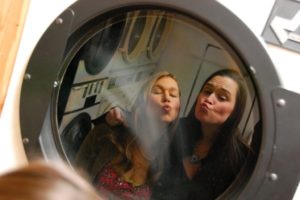 I have always felt proud of my age, owning it and naming it. I like the way I am aging, mostly. Until I have to have a photo shoot.

This CD is so long in the making, so tenuous in its existence in my mind, that I’ve kind of let go of all expectations of how it’s going to be received. The whole album is about parenthood, marriage and the challenges of staying present to the gifts of these most precious relationships, the challenge of losing oneself in one’s beloveds. So of course it is ironic and natural that our husbands and children and the life we have made for ourselves over the past two plus years are the very reasons we have not been able to just put our noses to the grindstone and get the thing out there. We had one day a week–sometimes–to show up in the recording studio, and on these days we really only had from about 11am-2pm. Three hours before we had to go pick up our kids from school.

Anyway, something funny happened on the way to this photo shoot. I actually had fun. First I had fun with Katryna thinking of the image we wanted: a sort of Hopper-esque shot of us sitting on a couple of chairs linked together in the middle of a laundromat, us dressed in finery as if we were going to a ball, but instead surrounded by laundry with one of us checking her iPhone. I saw the image clearly–a blue-green background with stunning overlit shots of us looking gorgeous and washed out, our faces so overlit that all you can see are our shocked features and fancy hairdos. It would be funny and beautiful all at the same time.
THIS IS NOT THAT SHOT! 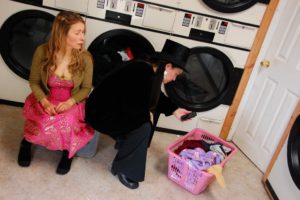 It wasn’t possible to get that shot because
1. We didn’t have the lighting. Instead Liz held up a big gold hula hoop with gold foil stretched over it to shine the lights our friend Jennifer lent us into our faces. But washed out it did not make us.
2. The room was not bluegreen but beige and black and truly ugly, not jolie-laide as I’d imagined. 3. We really looked like women in their mid-forties dressed up to go to a party and not hipster twentysomethings who resembled Delores O’Riorden. I can’t get away from the fact that we were born in the late 60s and that we’re now in the two thousand teens. 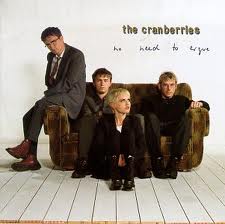 The photo shoot was fun after all. We laughed. We focused. When we saw that our initial vision wasn’t going to work, we punted. Our amazing friend and photographer Kris took shots of us in the reflection of the dryer windows. Afterwards we all went out to dinner at one of those little restaurants tucked away, and we tucked ourselves away in the far back corner. All that glamour had made us hungry. 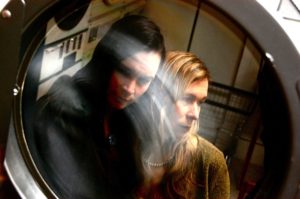 Note: During this period of time while I write our forthcoming book All Together Singing in the Kitchen: How to Create Family Harmony, while I intend to update this blog…