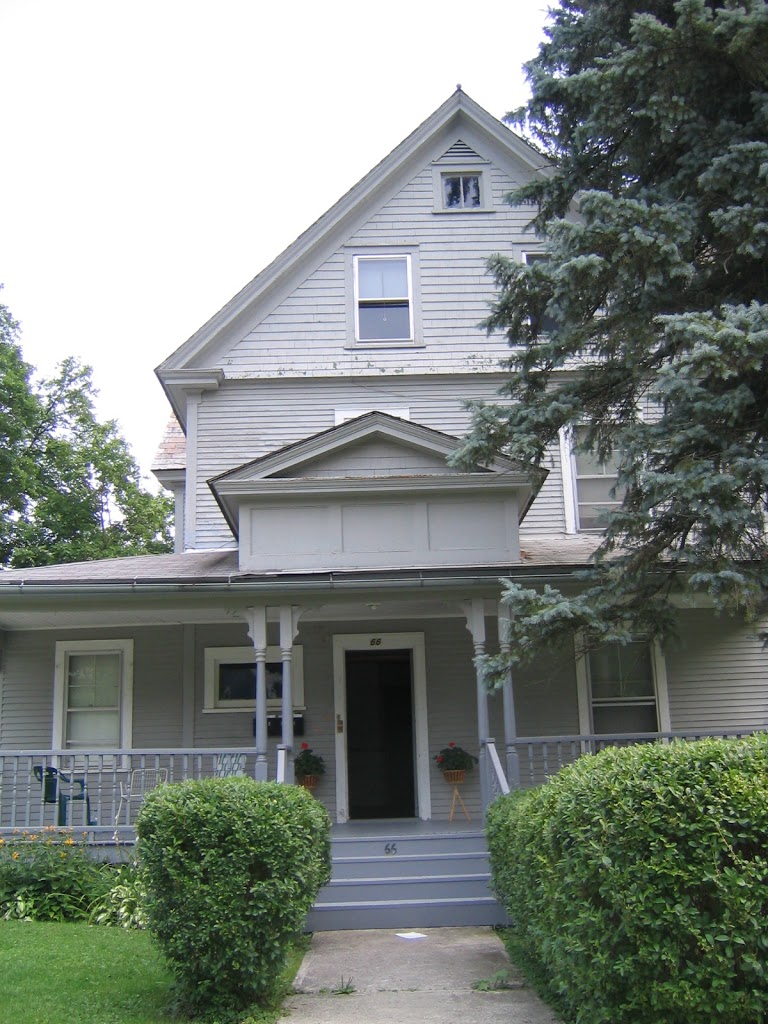 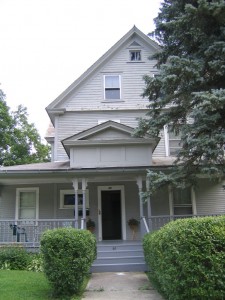 Monday’s post is at Singing in the Kitchen and it is worth reading. Elle declared Saturday, “The best today of my whole life.” You will know why if you read it.

It was a full weekend. The kids got to watch TV on Saturday morning because Tom and I had to clear out the kitchen, which is being renovated this summer. Already we have a pit dug to the east of the kitchen where the extension will go, and on Friday the good men came and cut a hole in our dining room window and put in a door so we can go out and in from the side porch. There is a John Deere backhoe in our yard. Jay is in heaven. “I wike dat man,” he said pointing at our contractor who was operating the backhoe, making it lift shovelsful of dirt out of the ground and carefully dropping them in a pile. “He’s a good guy.” 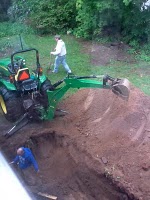 At the top of this post is a picture of the house Katryna and David and I first lived in when we were trying to be a rock band. OK, folk trio. The address was 66 Hoxsey Street in Williamstown, MA, and we later named our first CD after this address. We moved up to Williamstown the day after our first paid gig (Trinity College reunions on June 7, 1991) because David got a job as an intern at the celebrated Williamstown Theatre festival. I established a tiny office with my 1986 Mac (remember those? the ones that looked like a small vertical box.)

I tried hard to get us gigs and was extremely frustrated by the fact that in order to get gigs you had to have played some. I cold-called Charlie Hunter who managed Sweet Honey and the Rock and some guy named Chris Smither, and he told me to make a press kit, which discouraged me, as we had no press. So I wrote a bio (I claimed we had a cult following; I didn’t say the cult consisted of four friends of mine from college) and a list of songs we covered, including the Velvet Underground’s “I’ll Be Your Mirror” and “Stephanie Says,” The Roches “Hammond Song,” King Missile’s “I Am a Sensitive Artist,” Trapezoid’s “Wagoner’s Lad” and of course Sinaed O’Connor’s “Black Boys on Mopeds.” We lived off of ramen noodles and microwave popcorn for a few weeks. We got invited to a cocktail party by one of the actors, and a young actress named Isabel Rose said, “You really have to hustle in this business. I mean, you won’t get anywhere if all you do is sit around knitting sweaters.” I immediately stopped knitting.

Another actor at the festival, John Bennett Perry (father of future Friends star Matthew Perry) had a lovely voice, and at the cocktail party, we all took out our guitars and played Hank Williams songs. John is from Williamstown and he knew the guy in charge of getting entertainment for the Williams Inn. John told the guy who booked us that we would bring in the actors.

The Williams Inn paid us $400 a week to play for four hours Sunday and Monday nights in their bar. We thought we had made it big. We spent our first paycheck on a sound system which we purchased in Brattleboro VT at Maple Leaf Music. Slowly we grew a following; the actors from the theatre festival did indeed to see us on these days–their days off. We performed to a seventeen year old Gwenyth Paltrow, who hung out at our table between sets, saying things like, “My parents really want me to go to college, but I want to be a movie star!” We said, “Now, Gwynnie; you really should go to college.” She said, “But I hajust got my first movie! I’m in Hook! All I say is,” here she gasped, “‘Petah!'” in a British accent. “But it’s something.”

We also hung out with Kate Burton, daughter of Richard and an amazing actor in her own right; John Benjamin Hickey, and the guy from the Heinz gravy commercials who was rich and used to buy everyone in the bar a round or two of drinks.

We also started playing the Williamstown Theatre Post Show Caberet, which was more fun that anything we’d ever done at that point. Later, playing workshop stages at festivals came close.

So I spoke again today. Patty drove up through the snow to play with Amelia. Since I couldn’t talk, I couldn’t tell Amelia. She was giddy when Patty’s car pulled…

Why I Am Blogging Daily During the Month of March

Because I’m scared that if I don’t commit to it, in public, to you, I will spend my two hours of precious daily babysitter time fast asleep in my bed….

Possibly one of the most self-indulgent videos ever made, but here it is. Since recording this demo, we’ve decided to raise the key and we’ve messed with the arrangement quite…