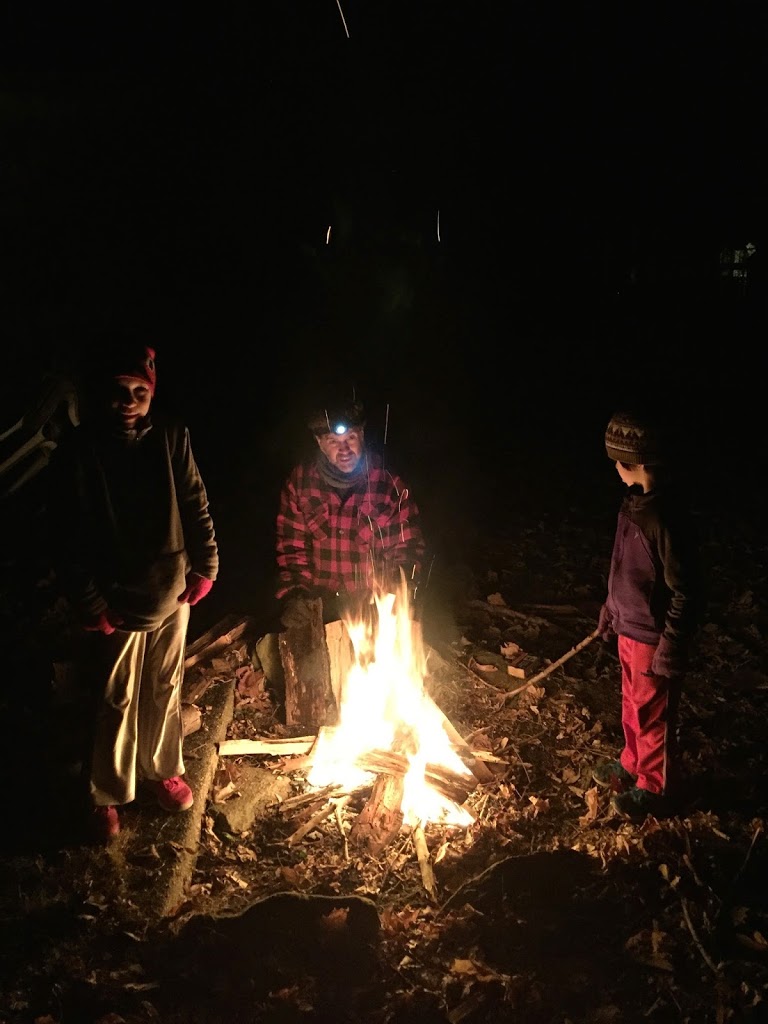 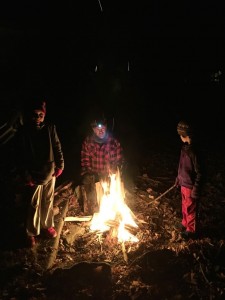 Last night, we lit a fire in our backyard fire pit and huddled around it, jostling each other to find the back end of the breeze. It was a crisp 19 degrees with a waxing moon, clear and solemn in the star speckled sky. We don’t have a fireplace or a wood stove, but this backyard pit has its advantages (though one can’t hang stockings around it.) Jay and Elle found sticks and persuaded us to haul out the marshmallows. So on January first, we inaugurated a new tradition: the New Year’s Fire Pit Intentions Ceremony.

Sitting in the cold, taking much solace in the warmth from the flames, I couldn’t help but think of how these evening fires created our civilization. “Mom, who invented fire?” Jay asked. “Or, who discovered it,” Tom wondered. “Prometheus,” I offered, and told them the story of the demi-god sacrificing his liver (daily) in recompense for sharing this element with humankind. “Gross,” said Elle. “Yes,”I agreed. And then I commenced to stare into the fire. How exactly has the TV improved on this practice of gathering in the evening and spacing out, transfixed, on this vision of flames dancing, receding, expanding to frightening levels that threaten to lash out of their container, and then finally diminishing again into brilliant red edges along blackened bits of wood? This is where story telling began: around a fire. Same with songs, I am sure. (Probably the first stories were songs, and/or vice versa). How did the expanding and contracting of the flames influence the storyteller as she spun her tale to her fire-bound audience? Did the leaping flames have an effect on the character’s actions? Did dying embers offer an alternate plot twist?

Perhaps my favorite Christmas present this year was a copy of the revised Bob Dylan/The Band Basement Tapes (the “raw” version which is substantially shorter than the deluxe version.) Huge Dylan fan that I am, and Band fan too*, I never cared for the Basement Tapes, at least not the version that came out in 1975. It struck me as a bunch of pot-influenced drunken music. I am embarrassed now by that assessment, as I am completely obsessed with the tenor of this new release. It’s like being in the living room with these guys as they surround us with the sounds of carnival. (How I love Richard Manuel’s piano! And voice!) I can’t stop listening to this record. I feel as though I have discovered gold. How could I not have known all of these songs before? Well, many I did, and many I sang (“You Ain’t Going Nowhere,” “I Shall Be Released,”) but others I am just discovering (“Open the Door, Homer,” “900 Miles from Home,” “Apple Suckling Tree.”) They seem already like old friends, and I am looking forward to delving into the layers of lyric Dylan always provides.

A couple of days ago, someone flamed me on Facebook. I won’t get into why; suffice it to say that it was unexpected and strange, and while I took in the criticism and tried to see my part in it and how I could make amends to this person, I also just felt burned. When it happened, I sat, powerbook on my lap, and felt the heat infuse my body. This is what shame feels like to me: hot, consuming, total. Because of years of therapy, I was able to do this: to just feel the feelings apart from the story of who said what. I concentrated on the raw feeling. As Thich Naht Hahn says, “When your house is burning down, put the fire out. Don’t go looking for who lit it.” After a few minutes, I noticed the heat abating in my body. I pictured the person who flamed me; fortunately I had known her when she was a young girl, so I pictured her sweet adolescent face. I thought about the pain she must be in today to do something like what she did. I lifted a prayer to her. Then I got up and told my husband about it. “Why do you even go online?” he asked. “People are insane.”

Back at the intentions ceremony, Elle announced that hers was to help her cousin William get a dog. Tom’s was to accept more the daily things he has to do. Jay’s was a long speech about how he hoped people would be less greedy and recycle more. Also that they would be “mostly happy.” Mine was about commencing to outgrow fear. I know I will never be successful, but I’m digging in my heels this year and trying a little harder. I am tired of being afraid of what others think of me. I am tired of my greedy little inner bean-counter who thinks perpetually she’s getting the raw end of the deal. I am tired of that cold metallic pinchy feeling I get when I sense I am losing control of my kids. (Which happens hourly.) I am going to experiment with faith. I am going to play with trusting and relying on a much more generous spirit than the one I possess on my own, cut off from the rest of you. I’m going to embrace my age–47 at this moment–and try to act like a wise, confident grown up, and also let loose more often and play like a kid. Or my dog. I want to channel some of that joyous non-sensical spirit of those Basement Tapes and make some fun music with my friends. I am going to practice my piano, and use that growth mindset everyone’s talking about to stick with it when it gets hard.

*We opened for the Band in 1995 at Mass MoCA. Though we did not get an encore and we sold a pathetic 1 (one) CD that night, more folks than I can count have come up to us since and told us they discovered us at that show. “The Weight” was one of the first songs we covered as a band.