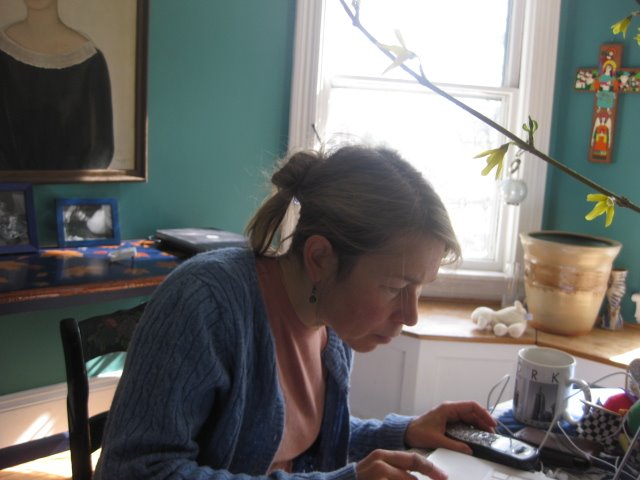 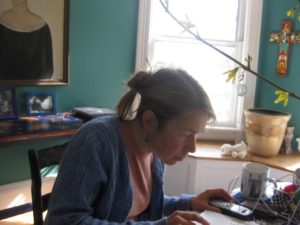 A photo Elle took of me which I think I already posted, but I am showing it again to demonstrate my characteristic hunch over my computer which most likely contributes to my back pain. Also because it’s Mother’s Day and I am so happy to be her mother.

A reader sent me a link to a Google Author’s YouTube clip which is long (53 minutes) but excellent. The author is Esther Gokhale and her book is 8 Steps to a Pain Free Back which I have just asked my local independent book store (Broadside in Northampton, MA) to order for me.

So now I have Esther’s voice gently admonishing me whenever I find myself in the C curve shape.

What I find particularly compelling about her talk is the observation that kids walk and move and orient themselves with their “behinds behind them.” I have noticed this in all children, my own included, and it goes against the prescription we Western girls all grew up with: tuck in your tummies, tuck in your butts. One of my grandmothers resembled a ruler, and everyone always pointed to her as the paragon of posture. But when I started studying Pilates in 2000, I noticed that my instructor, who was absolutely lovely and had great posture, did walk with her behind behind her. And that this looked great. Gohkale uses lots of photos of correct posture which she took when visiting indigenous cultures where people labor physically long days, yet where only about 7% of the population reports having any back pain (here it is more like 90%). I can’t help but think that there’s something to the connection between chronic back pain and the desire to reign in one’s sexual parts. Wiggle that behind, sisters!

As I write this, my back is killing me. All my good work at the end of last week was trashed on Friday and Saturday when I packed for me and my kids, helped Katryna load stuff in and out of the van, carried my kids around, played guitar for two shows, slept all night long with Jay, breastfeeding intermittently (when I sleep with him, I am usually curled up around him holding him to me for fear that he will fall off the bed otherwise) and knitting. I am sure knitting does not help my shoulder pain.

Also, I failed to do my exercises while I was away.

And I failed to do them last night when I returned. Instead, I was feted. Some readers have commented that Tom always comes across as perfect in this blog. He is not. He has a tendency towards spaciness that includes, most recently, leaving boxes of matches on the counter where Elle finds them and says, “Mama what is this fer?” He gets cranky and unreasonable when he has spent too much time working followed by too much time parenting. He often says, “Between you and I.” He does not adore the Beatles. And he doesn’t understand why, if left to my own devices and unlimited funds, I would eat salmon at every meal. But last night showcases one of the many reasons he deserves his good reputation.

Katryna dropped us off at quarter past five yesterday afternoon. Tom had spent the whole day with his own mother, who is a master gardener, and together they had transformed our yard, his mother providing us with lots of pots of plants that will be ground cover when they grow up, and Tom prepping our vegetable gardens (one in the backyard is now twice the size as last year’s, and one in what used to be our front lawn). There was salmon and asparagus toasted to a delectable crisp on the grill, a big pot of Basmati brown rice, and a bowl of salad of fresh spinach from our farmer’s market. The table was set with new candles and a card each for me and his mother at our place settings. He had bought two hanging pots of flowers for our porch and given me a Starbucks card in the hopes that I would take some “me” time and go there to write in my journal.

I was not brought up to honor Mother’s Day. My grandmother (the one shaped like a ruler) did not believe in it and called it “a holiday created by Hallmark.” My own mother foolishly handed down this belief to her three daughters, and it is only now that we are direct beneficiaries of the Hallmark Holiday that we regularly remember her on this day. So I have no preconceived expectations of what my husband “should” do for me on this day; only delight that he does anything at all. My father said to him this morning the equivalent of, “Go easy, dude. You are making it hard for the rest of us.”

So far, I have had a perfect day. We all slept till almost 7. We made no plans. Elle and Tom have mostly been playing in the garden, except for a mid-morning sojourn during which we all went to the garden center and bought starters: many varieties of lettuces, cauliflower, broccoli, sugar snap pea seeds, and a purple metal (not plastic) watering can since our last one (which was plastic) got run over by one of our cars (my car––but Tom, manifesting another example of his non-perfect spaciness, had left it in the middle of the driveway). Tom dropped me off a few miles (okay, 2) from home and I ran the rest of the way, listening to a This American Life podcast about the Gwartney family (a Mother’s Day cautionary tale which I highly recommend). I got to read the New York Times while eating lunch and then take a nap. Meanwhile, Tom has put all the plants in the garden.

But best of all, I wrote a song for my own mother and got to sing it to her via Skype. After playing it once, Elle said, “Play that again so I can play too.” She picked up her drum mallets and scooted over to the music corner. I tilted the computer’s camera so that my parents could watch their granddaughter while I played my Mother’s Day song again.

My mother said, after our concert was finished, “The best Mother’s Day present you could give me is that you love being a mother so much yourself.”

I said to Tom today, on the way to the Garden Center, “Happy Mother’s Day to you. If ‘mother’ can be a verb, then you do it very well.”

“I have to say,” he replied. “That whenever Elle mistakenly calls me ‘Mama’ I am flattered.” [Which she does a lot, as well as call me ‘Dada,’ and it has occurred to me on several occasions that I would have made a better father than mother.] I can’t begin to list what was the best Mother’s Day gift out of all the gifts I got, and I can’t begin to list the best gifts my own mother gave me, but way high up there is the contagious one that I do seem to have inherited. I love being a mother in the most surprising and unexpected way, and I want to thank mothers everywhere for what they do for the planet. Have a great day, and don’t forget to keep your gorgeous motherly behind behind you.