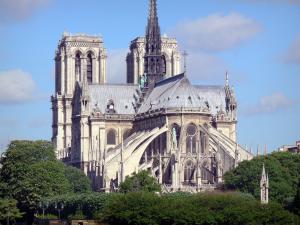 My friend Beth DeSombre posted on my Facebook page this week. She said she dreamed that Katryna and I had released a new album called Goodbye, Mexico, and that it had great songs on it. So of course, songs needed to be written.

I remember Mexico
Though I have never been
I’ve only seen the places
That they keep the tourists in
I’ve never seen my neighbor
And we’ve never shared a meal
I’ve never met their dogs in the park
Still I say that I remember
Because you told me stories
And filled me full of pictures
Of a sun-soaked territory
And I always thought we’d ride there
And sleep under the moon
But would be some other century.

So goodbye Mexico,
Goodbye Notre Dame
Eight hundred years
Are swallowed by the flames
Why do I cry when no one has died?
Not a tree, not a bird, not a child?

I went to Notre Dame once
But I could not get in
The lines were way too long and so
I said I’d come again
I thought there’d be a next time
For the windows and the saints
Now I wish I’d kept my place in line.

Well, I knew another church once
That burned down to the ground
All our sacred treasures
Were lost and never found
And for years we stood and looked
At the hole where she had been
Wondering how she could rise again

So goodbye Mexico,
Goodbye Notre Dame
Eight hundred years
Are swallowed by the flames
Why do I cry when no one has died?
Not a tree, not a bird, not a child?

So goodbye Mexico,
Goodbye Ellis Isle
Centuries of amnesty
Are being put on trial
Why do I cry when no one has died?
Not a tree, not a bird, not a child?