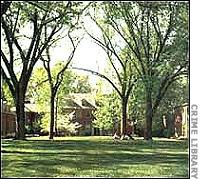 In 1992, I was working as the Assistant Dean of Students at the Madeira School in McLean, VA. That’s a really fancy title for “Glorified Secretary And Well-Paid Babysitter of 40 Teenage Girls.” To give you some perspective, the women the Dean of Students hired to be our shared secretary became the Dean of Students herself the following year when both the former dean and I left for greener pastures. She–the secretary turned dean–also taught me how to knit, which was pretty much all I did in the dean’s office, other than sign girls on and off campus, call the taxi company to get rides for girls, organize trips to the mall and occasionally hire indie rock bands (that the girls hated) to play at the spring formal. But I digress. The point is: I learned how to knit once, and now, thanks to my efforts at blogging daily last March and Amanda Soule’s wonderful book The Creative Family, I am a knitter again. 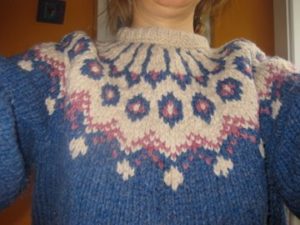 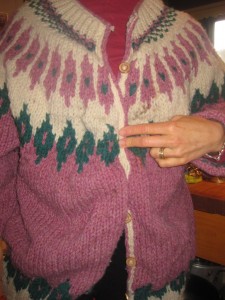 This last one, the cardigan, was knit for Katryna, but it was too huge for her so she gave it back to me. OK, truly, the problem with the pink sweater was that it was just a gigantic, unshapely mess of a thing. It looked kind of like what it was: a novice knitter’s sweater that only a doting grandparent would wear, or one that one’s attractive sister would politely received and then stick in a drawer, never to be worn. So I decided it would be perfect as a felting project.

Felting is easy. This is what you do:
-throw the garment in the washing machine. Make sure the washing machine is clean! (Make sure there have been several washes since your last load of diapers, for instance.)
-set your levels to run both a hot and cold rinse, and set your level at small, or low, to save water. (And don’t take up felting if you live in Arizona or California or anywhere there’s a water shortage.)
-add some earth-friendly delicate soap, or Woolite.
-repeat three times, or until the garment looks felty.
-shape the garment when wet: this is your first and last chance to make it look the way you want!

I was hoping the pink sweater would shrink so that it hugged me nice and tight to the body, but instead it just turned into a small version of its former self: baggy with sleeves that now wouldn’t cover my wrists. 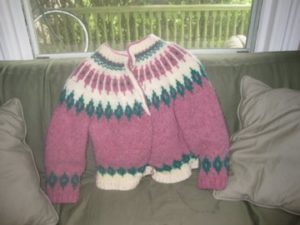 Next up: Elle’s lunch bag! Her first day of school is Thursday! 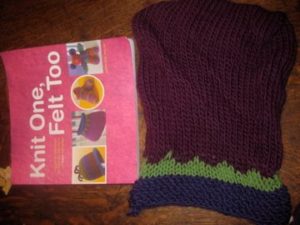 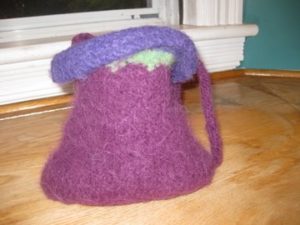 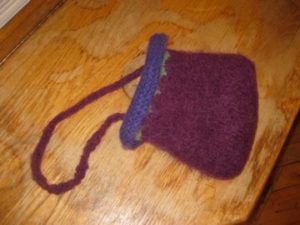 After I posted last night, I realized I’m not done yet with Barbies and princesses, particularly one named Cinderella. I don’t know how Lila heard about Cinderella. I certainly didn’t…

Oh, friends, I am driving myself crazy. And everyone else around me too. All because of a dog. For Christmas, we told our kids we were getting a puppy. I have been…