I don’t feel quite as happy today. The trees all came down. Big, graceful pine trees, four of them, hundreds of feet high. I watched one arc in slo-mo toward my house, shaking the ground as it hit. Now the logs are lying across the barn’s old foundation like bodies.

The city of Northampton has a strict policy. When you cut down trees of a certain size, you need to replace them. There’s a complex formula, but suffice it to say that we are going to be planting fourteen trees of 2′ or more diameter in what is now our de-forested backyard. But that won’t happen until next spring at the earliest; the new structure has to go up first. So we will be staring at our treeless yard for quite a while.

It rained yesterday, and our yard became a swamp. Hudson and I watched the tractors and dump trucks crawl back and forth. The excavators asked me to move our cars, and so I took Hudson to get a haircut. By bizarre coincidence, who was there but my old dog Stella! 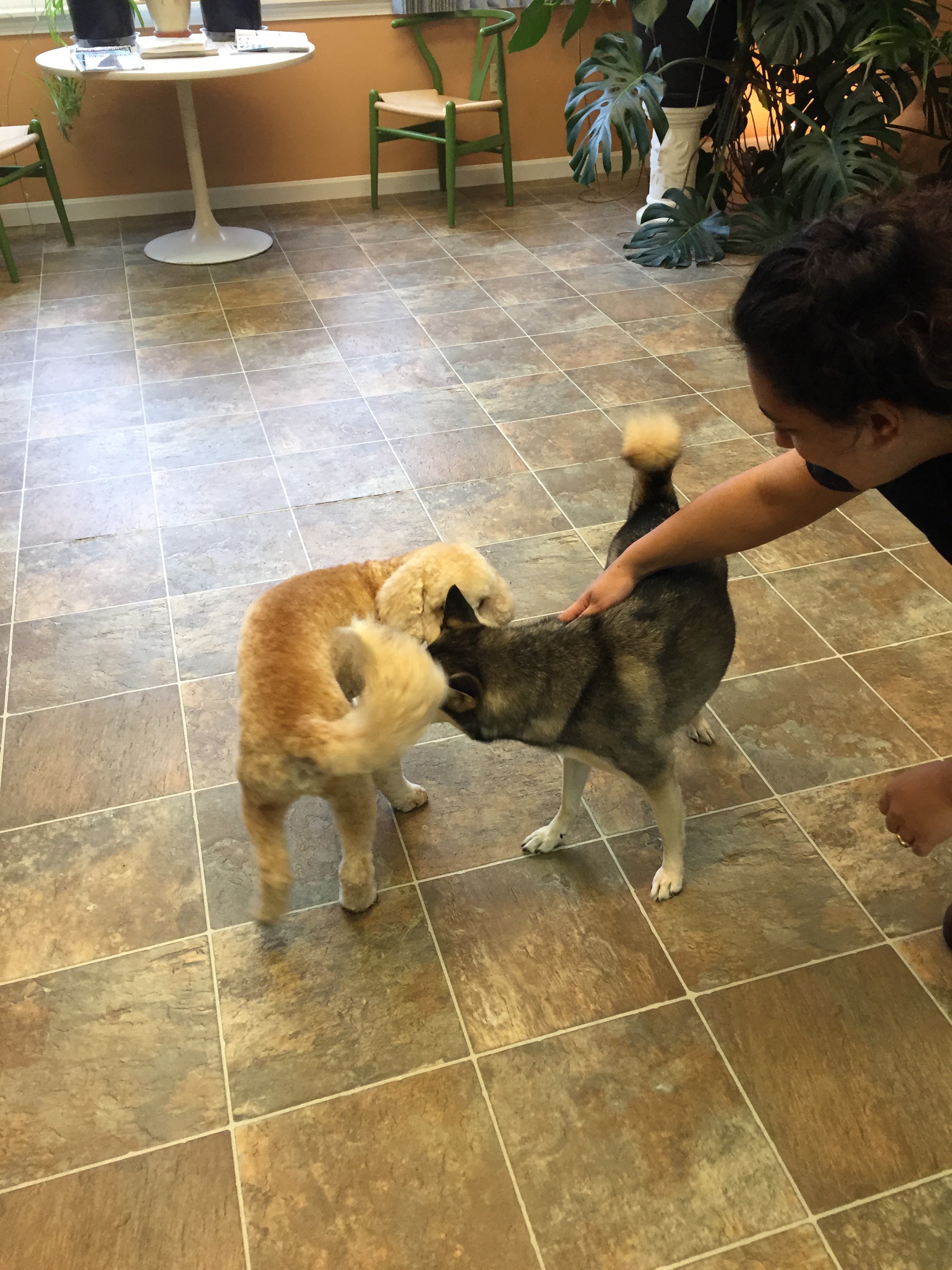 They met. Hudson was intrigued, but Stella was not. I held her face in my hands and kissed her, but she is not my dog anymore.

The news about Al Franken broke my heart. I hate that I have to be consistent in my denouncement of disgusting male behavior, but I will be. It’s not OK what he did. It’s not OK what Bill Clinton did, what JFK did, what Woody Allen did, what Bill Cosby did. All these men (and more; men I will not mention; men of whose sins I remain ignorant) I love and want to forgive. But the male-dominated culture needs to change. We need to change it. People can not treat people like objects, toys, jokes, substances to abuse. Enough.

(But where are the lines? In my own mind, there is a difference between pedophilia and adultery. There is a difference between drugging a woman in order to rape her and having your oral surgeon grope you as you are leaving his office, still slightly drugged from the general anesthesia. Both are still horrible. I am wrestling with whole-scale condemnation. I am wrestling with some people in my own life who have been accused, and whom I hope are innocent. But I am also a Sister, and my inclination is to believe every woman. I am going to listen and learn.)

I am glad for the dialogue.

At the end of the day, all the trees but one had been taken down. Besides the four huge pines, there were a bunch of junk maples and saplings that my landscaper called “big weeds.” As the trees fell, as we were crying over them, as we were grieving about our war zone, we looked out the window and saw this.

Now visible from our back window, a large red maple. She is naked today, but with the other trees out of her way, we will get to watch her, year after year, grow new leaves, shade our new structure, and turn red and orange and gold come fall. Without the removal of the junk trees, we never would have noticed she was there.

A designer friend of mine shook his head when I suggested a choice for our kitchen renovation. “No,” he said, “I don’t think that will succeed.” It was the…