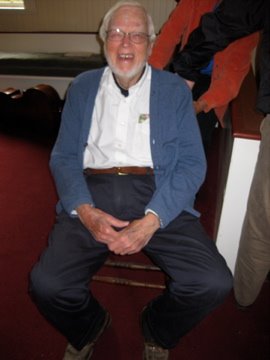 Stephen Levine in “Breaking the Drought” 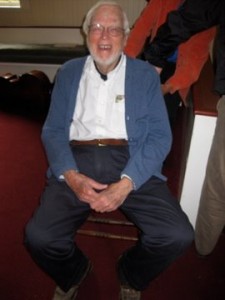 Arnold Westwood turned 88 yesterday. He’s been a Unitarian Universalist minster all his life; I believe his father too was a UU minister. He is not, however, our minister; ours is technically a congregational church, although one might not know what the heck it was if one happened upon it. There is no cross whatsoever to be found and Steve Philbrick regularly reads from Stephen Mitchell’s translation of the Tao, and almost as often from The Baseball Book Of Wisdom. But last weekend was lay Sunday, and Arnold, retired for 25 years, volunteered to preach.

Mostly he talked about himself, about what he’s learned from 88 years on the planet.

The really, really hard part for me is to truly begin to love myself. I’m discovering for me it all has to begin there. It’s sort of like being retooled. The amount of being loved by family and friends doesn’t do as much as what you have to do to keep on loving yourself – and it runs all the way from accepting all the complications and embarrassments that come with an overactive bladder to my no longer needing to call attention to my petty virtues and several accomplishments. I know I’ve done a lot. I just don’t need to tell others all the time. My chorus to myself is: “Westwood, leave it alone, you’re OK.”

So, at 88, I am still wrestling with my ego needs and expect I will until I die. And as death approaches I hope they will pretty much disappear. That will be heaven.

In conclusion, I suspect unconditional love must be akin to what so many others experience as the love of God. Love to draw upon when it’s the only love there is.

He said some other things that stayed with me. One was about the nature of prayer, and he said this extemporaneously, so I don’t have the direct quotation (I asked him for permission to write about him and to use his sermon, both of which he gave me.) He said something to the effect that he doesn’t believe in a God who answers our prayers to cure our great aunt Margaret; the God he knows is only effective in changing our own hearts when we ask for help. So if our intention is to pray for Aunt Margaret, the best we can hope for is that this act will sharpen our awareness of her and help us to better serve her in her illness or time of need.

And that’s no small thing.

He also talked about his mother’s love for him. She was 43 when she gave birth to him and he was her only child. “She bathed me with love,” he said. “If anything, she loved me too much.”

Arnold radiates love, as you can see by his photo. He says, “I love you,” quickly and easily at the end of phone conversations. He shares his struggles and epiphanies with friends as they come along and never pretends to be the wise old man. He is a part of our community and gives hugely of his time and experience and insight. He lives his hero Emerson’s statement: “The only way to have a friend is to be one.”

Why is loving so hard? And why do I get it into my head that it’s more important for the next load of laundry to be done than it is to bask in the amazing miracle that is my family and choose to do laundry instead of participating with Tom and the kids as they play Pig Pile on Daddy? 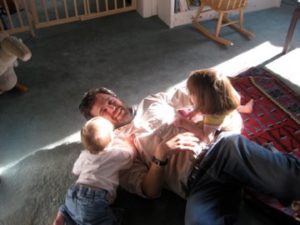 I literally have to shake myself out of my habitual groove, shake myself down like a bad dog until I am awake to the gorgeous reality of what’s going on in the music room. The urge to pursue my agenda is so strong. And what it really comes down to, as I said in the last post, is this insidious desire to be a good girl, to be liked, to be well-thought of. So that means the house needs to be functioning like the proverbial well-oiled machine. It means I go out the door at 8am for my 23 minute run, even when life is much richer on the carpet in my music room. It means I spend two hours, as I did today, filling out forms for Elle’s preschool.

I don’t mean to diminish the importance of these daily tasks. I know I am touching on the old Mary/Martha conundrum. I know that a big part of what I need to do as a parent is chop wood and carry water, work to make a living to put food on the table for my kids, stay healthy so they have a sane and functional mother, make a space for them to grow and flourish. And I certainly don’t have any difficulty showing them my love. It’s loving myself that’s challenging sometimes.

A mom friend who has a five-year-old called today to remind me that ages 2-3 are really tricky. “They make you do things you wish you hadn’t done,” she said.

My friend the child psychiatrist wants me to adopt his mantra: “Don’t expect that you should be a good parent. Just shoot for being a good enough parent.”

But I read so many self-help books when I was in my twenties that say things like, “Unfortunately, most of us were parented so poorly that we’re now incapable of _______.” You can fill in the blank with “feeding ourselves,” “standing up straight,” “being instead of doing,” “writing without a truckload of self-criticism.” Didn’t we all vow to do better by our kids, those little tablas rasas with which we’ve been entrusted? So it’s hard for some of us to accept the idea of just settling for “good enough.” I want the road to be easier for my kids. I don’t want them to have to struggle. And I want my children to be bathed not just by my love but by the love of the whole world!

And that’s just not the way it usually goes.

All this said, age three so far is my favorite age, next to nine months. Today Elle and Jay and I went to the co-op to get some butter for our trip to the Adirondacks this weekend. I’d given Elle a big cracker to nosh on in the store, but what she really wanted to do was feed it to Jay. They were riding together in the shopping cart.

Countdown to Jam for the Fans, T- minus 21

This was during our This Town Is Wrong tour in 2004. We are playing with the CrackerJack Band at this place in the suburbs of Philly that reminded Katryna and…

I am joyfully chatting away. I actuallly think I might have overdone it a little. I will return to the doctor on Friday so I will let you know what…