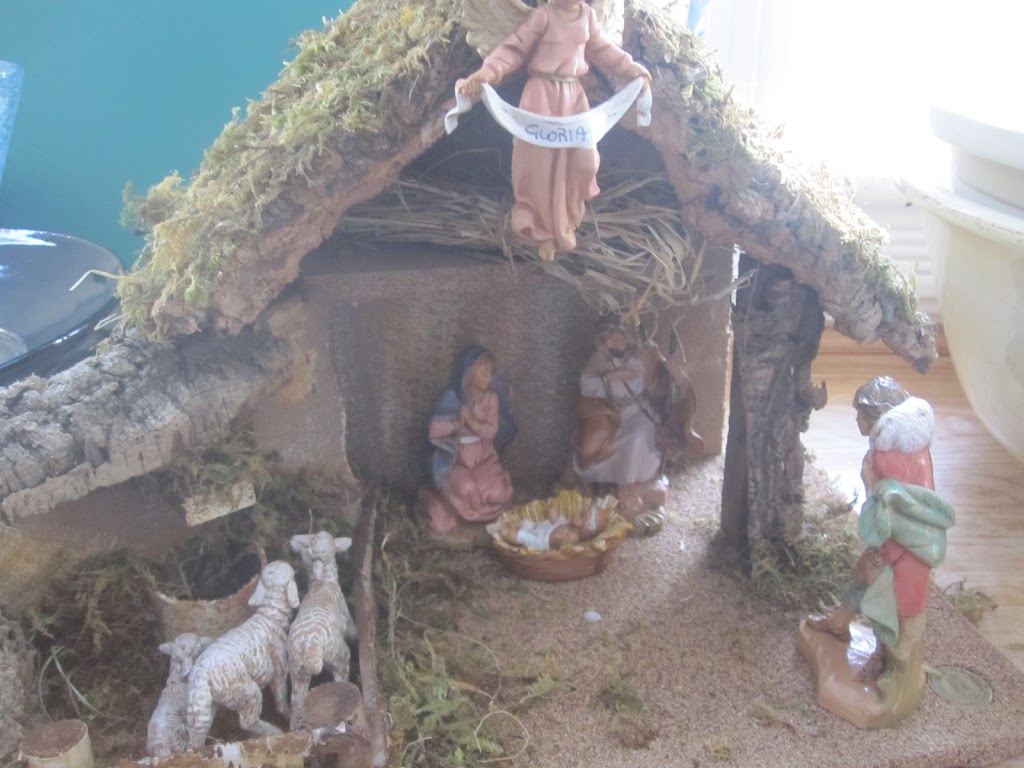 Early Snow by Mary Oliver
“Amazed I looked
out of the window and saw
the early snow coming down casually…
…I might have joined in, there was something
that wonderful and refreshing
about what was by then a confident, white blanket

carrying out its
cheerful work, covering ruts, softening
the earth’s trials, but at the same time
there was some kind of almost sorrow that fell

over me. It was the loneliness again. After all
what is Nature, it isn’t
kindness, it isn’t unkindness.”

Sometime in the last few weeks, I have pulled my gaze up from the manuscript of the copyedits of our book, realizing that this strange year is almost over. The horribleness started about a year ago, when on Dec. 27 we learned of eleven arsons in our town and had to figure out how to explain to our kids that we might be yanking them out of their beds and throwing them out the windows at any given time. I am glad I did not know at any point in the year that it would continue to pummel the people I love (not to mention a building I love) throughout 2010. It’s better not to know these things. And anyway, there was much to love in this year, much to be grateful for. One night recently we lit a candle for National Children’s Memorial Day and wept with gratitude for our own healthy babies, and with sorrow for all the ones lost, all those mothers and fathers with empty arms.

I had a hard time gearing up for Christmas this year. I wanted to. But I really hate that my mother-in-law is gone. It’s completely wrong. She loved Christmas; she made Christmas. I don’t want to have to pretend for my kids that everything is all right, and yet, that may be the best way to get through the day. I don’t want to spend money we don’t have on presents my kids will play with for just a day or two and then leave in the back of a closet. And I also don’t want to deal with their disappointment when they don’t get the pink sparkly barrettes and the five outfits from Hanna Andersson and the Tinkerbell sneakers and the pink crazy straws. (OK, only one of my kids is lobbying me full time, but it won’t be long until the younger one catches on.)

We did a show one Friday in New York City. A new fan approached me.
“There’s a lot of Christianity in your music,” he said, nodding.
“Yes,” I agreed. “that’s the tradition we grew up with. But I also love Buddha and Krishna too, if you know what I mean.”
He did. “Well,” he stuttered. (He was drinking a big glass of white wine. Earlier he had downed a big glass of red wine.) “It is the season of Christmas, you know. And when someone dies for our sins, it seems kind of wrong to not give them their due, don’t you think?”
I smiled at him.
He looked away. “Maybe I’m getting a little heavy for a music show.”
“Maybe,” I said. Then: “God bless you.”

I just can’t get with the idea that there is one way to God. That one tradition got lucky enough to be saved and all the others are doomed. It makes no sense. This is as true for Christianity as it is for Islam or Tantra. I love the Tantric teachings I have been learning all year in my yoga training, but what I love about them are first of all how unique and wonderful their stories are and second how their truths connect to the truths I have already known and loved and understood from other traditions. As the Buddha says, “One always knows the water of the ocean because it tastes of salt. One always knows the truth because it tastes like freedom.”

And yet, I do miss Jesus, especially this time of year. And so, partly to honor my Catholic mother-in-law, partly to fill a part of me that was thirsty, I set about to find some Christian in the Christmas.

We set up the amazing rubber creche our (also Catholic) uncle Brian gave us last year. It is SUPER AWESOME! It looks like this: 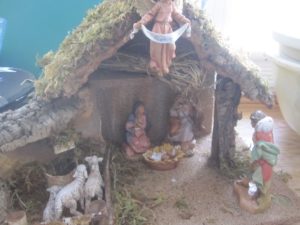 And for Christmas, Elle got the three wise men, who truly rock.

I gave my dad and his sister, the Amazing Aunt Elizabeth each a copy of Stephen Mitchell’s translation of the Bhagavad Gita. In turn, my father handed me a slim volume of a story he tells at Christmas: Henry Van Dyke’s The Other Wise Man. This little book is a treasure in our household, though this year, I had forgotten why. When I was laid low with the inevitable stomach flu the last week in December, I picked it up and re-read it. The story goes like this:

A true Wise Man from Persia, wealthy, a healer, and astrologer, beloved in his community, becomes convinced that the stars are telling him that this is the once-in-anyone’s-lifetime opportunity to seek and find the King. So he sells everything he has for three jewels: a sapphire, a ruby and a pearl which he plans to bring the baby King, in the same way his bretheren will bring gold, frankincense and myrrh. Off he goes on his horse, to meet up with the three more famous wise men. But en route, he comes across a dying man. Rather than pass him by, he tends to the sick man and heals him. But this causes him to miss his caravan. He has to sell the sapphire to purchase a camel which will allow him to traverse the desert alone.

He misses the holy family by a day. And he gives his ruby to a Roman soldier to keep him from killing a young mother and her baby. He spends the next thirty years seeking his King, only to miss him again on the night he is crucified. But during those years, he makes himself useful, healing the sick, ministering to the oppressed. He sells his pearl to save a young woman about to be sold into slavery. In each of his crossroads–at the moment when he must decide whether to keep the precious jewel for his king or to give it away to help someone in need–he agonizes.

Was it his great opportunity or his last temptation? He could not tell. One thing only was clear in the darkness of his mind––it was inevitable. And does not the inevitable come from God? (p.68).

I love how this unfolds: that even a good man, a Godly man, who sets his sites on something as selfless and pure as seeking the king would have his will thwarted. God is not a jukebox. We don’t just stick in our coins and get back what we want. But even more significantly, the ways of Love are mysterious indeed. This moment of ransom marks the end of the Other Wise Man’s life, and as he is dying, he finally finds what he has been seeking. He seems to the ransomed young woman who is cradling his dying body, to be in conversation with someone, asking “When did I see you hungry and gave you food? When did I see you sick and healed you?” And in response, a voice says:

Totally Tantric, and totally Christian. In fact, this is what makes Christianity sing for me. This notion that we are all Jesus, and all our sisters and brothers are Jesus, and that we do good to others as we would have them do to us. That it is our responsibility to feed and clothe and heal those in need way before any other kind of worship.

Christmas ended up being sweet, fun, radiant and full of music, family and even presents well given and well received, even as we grieved our missing ones. My highlights were a Solstice party at our children’s school, and our impromptu serenading of the animals at Smith Voc Ag. 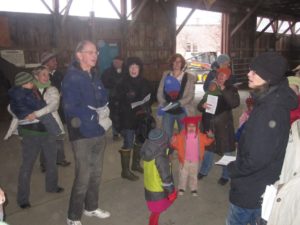 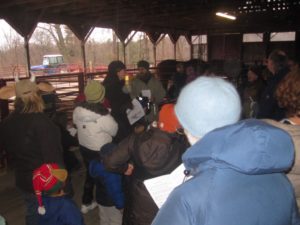 This year ends. We will mark it by taking down the dry old fire hazard of a tree (grateful that this year we do not live in the daily fear of waking up to our house aflame), doing some shows at First Night, and gathering together with friends for more singing to ring in the new year properly. And my new year’s resolution is to post shorter but more frequent posts. 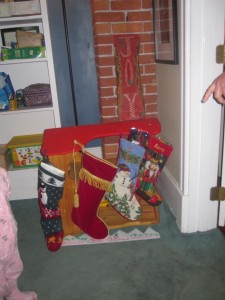 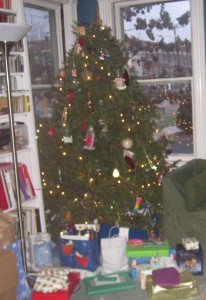