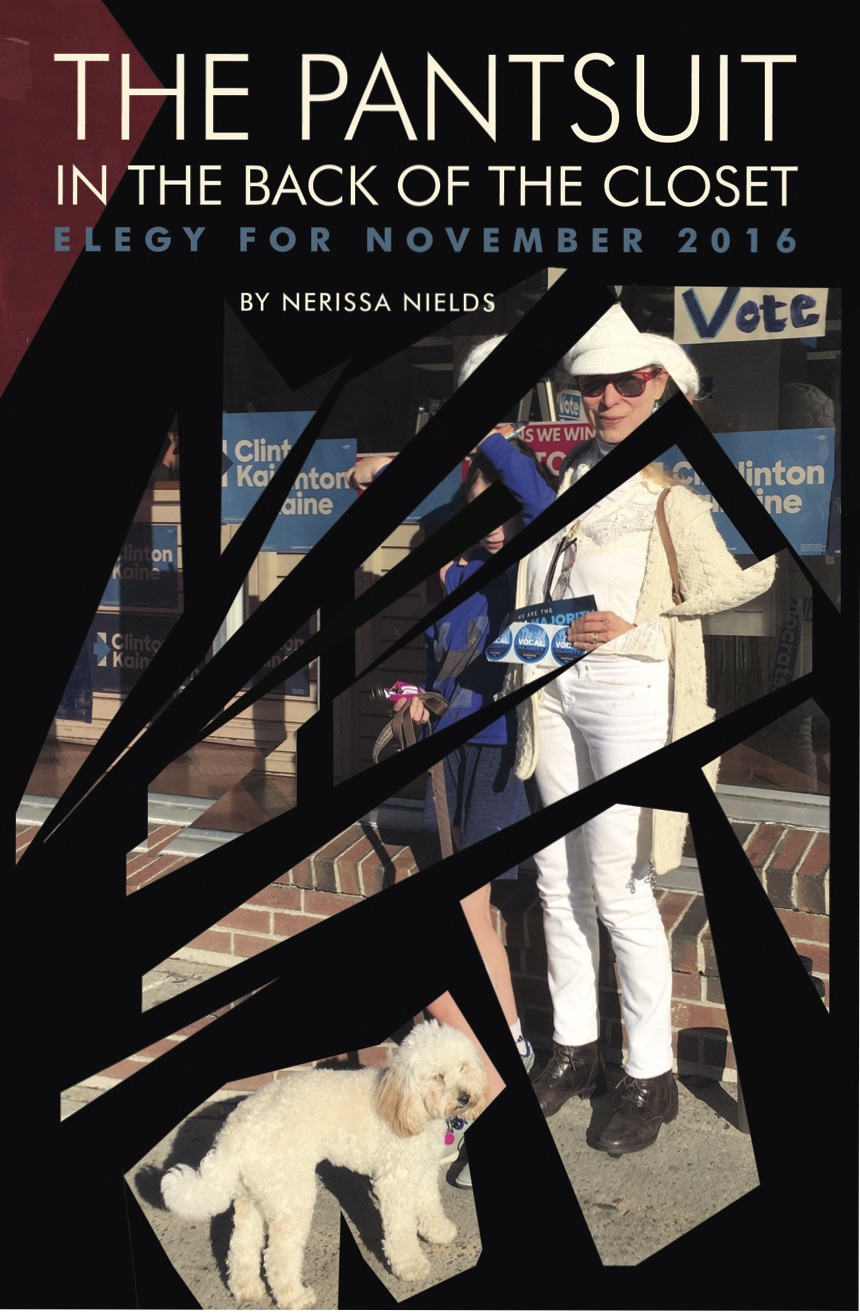 An election like 2016’s calls for massive rearrangements. We each cope in our own way with the seismic shifts that are taking place. Some of my friends are moving to Canada; some are quitting their jobs and running for office. My husband and I decided to switch sides of the bed. As part of the Grand Switcheroo, we’d also exchanged sides of the closet. So today I wasn’t surprised to see what I assumed to be one of his suits hidden way in the back, on my new side. Instead, it turned out to be my Hillary pantsuit, which I’d worn less than a month ago. Already dusty, it had the aspect of a relic. Navy blue, from Talbot’s, it was never attractive—I’d begged it off my mom in October when I was thinking it would be fun for Halloween, and for our Passim show scheduled for November 5th, just three days before the election. But in the days leading up to November 8th, I had come to cherish it and relish wearing it, usually with my hot yellow “Nasty Woman Vote” tee shirt and a pair of turquoise wedgie boots. Today, it just made me sad, seeing it on its pathetic wire hanger. In a year, will we remember Pantsuit Nation? Will we remember Hillary’s brave, tenacious performances in the three debates? Will we remember our optimism? Will we remember that she won the popular vote by a wider margin than ten other presidents did over their opponents?

No one knows what the future will bring. My friends on the Left seem to veer between a low-grade depression and full-on panic attacks. No one is sleeping well without chemical aid.

I wrote these poems during a strange time in my own life. In October, six months away from turning 50—midlife by any accounting—I had a melanoma diagnosis, a kitchen mishap resulting in second degree facial burns, and a breast lump biopsy. By the election, I’d had the mole removed and the margins excised, and further biopsies had revealed no cancer. My face was healing. But I’d been badly shaken, and I had learned, from these scares, that nothing is ever guaranteed. I had taken so much for granted. I had been living in fear and concern about the future, addicted (as so many of us were) to my iPhone, checking on the latest polls and outrages. My physical mishaps all occurred during a time when the New York Times was putting Hillary’s odds of winning the presidency at over 90%. Even Trump was admitting that his chances were not huge. Still, I had a hard time believing this country would elect a woman for the highest office in the land. Given the predictions, I really thought all my fears about the election must be symptomatic of a massive anxiety disorder. I sought out optimistic, rational people to “talk me down” at every turn. So did a lot of women I knew.

What I learned from the election, and from the increasing evidence of my own mortality, was to appreciate the power of fear. Many of my friends are also navigating this most primal of human emotions. If, as Pema Chodron says, “death is inevitable and the time of death is uncertain,” it seems reasonable that we always have three choices: to despair, to deny, or to celebrate each and every moment we have now. In these waning days of the Obama administration, I am trying my best to choose the latter. Allowing fear to drive the bus is to live in despair 24/7. Pretending there is nothing to fear does not help the most marginalized in our communities. But finding that middle place, where we allow fear to wake us up to what is going on, to take action, to appreciate what we still have: this is the sweet spot.

What I learned from the election was that even our democracy is not guaranteed. I thought that Trump’s pre-election comments about not accepting the outcome “unless I win” were grounds for disqualifying him among the voters. I was wrong. I thought his inexperience was disqualifying. I was wrong. I thought his erratic behavior was disqualifying. Wrong, again. I thought his business conflicts and the fact that he was a millionaire who shipped his own jobs overseas would turn off working class voters. Apparently not. I took Hillary’s loss personally. It’s hard not to read the election as a referendum on intelligent middle-aged women. And so this collection grapples with what I and many of my colleagues are experiencing now, waking up female in the post-Obama era. Taking in what it means for my daughter and my nieces. Wondering what it means for myself and my sisters.

Where do we stand when the very ground is shifting? We hop a lot. We learn to find a new center of gravity.

I offer these poems as a kind of time capsule. In a year, they will look very different. Young readers ten years from now probably won’t even know what I was referring to when I mention Access Hollywood. Let’s hope that’s because it’s ancient history, and not because this era has been erased from the record. Let’s hope that’s because Trump’s presidency ended early, and that some other pantsuited politician found a way to connect with all Americans, thread the electoral college needle, and make her home the White House. Until then, I will draw courage from another writer, Colson Whitehead, whose powerful and timely book The Underground Railroad came to the world in 2016, the same year so many hard things came into the world, the same year so many dear friends left the world. In accepting the National Book Award, Whitehead said, “Be kind to everybody, make art and fight the power.” This is as good a motto as any to live by in a Trumpian America. Nothing is guaranteed. Not our health, not our best-researched predictions, not our democracy. We have this moment. We can choose to escape it, numb it, protest it; or we can live fully in it, connecting deeply with our beloveds, fighting injustice when we see it, and making sense of it through art. I am very grateful that 30 Poems in November came along exactly when it did. What a perfect communion of those three elements Whitehead emphasizes: connection, poetry, and social justice..

From the Introduction of Nerissa Nields’s book of poetry, The Pantsuit in the Back of the Closet

I Didn’t Know I Wasn’t Supposed to Love

Another thing I didn’t know I wasn’t supposed to love until college was squirrels. My babysitter in New York would take me to the park, and when I’d point my…