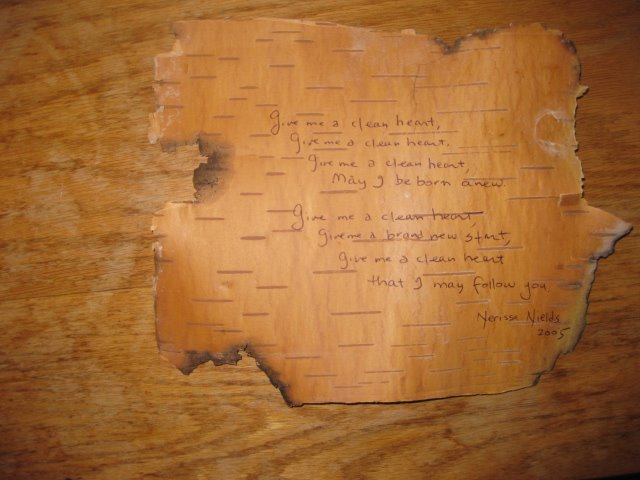 …But her soul, only partially
unpackaged, sings
through the slate that guards it,
contacts those of us waiting here
with a splay of its soft
scrutinizing fingers.
Her soul is a sapling thing,
something green, dew-damp
but resolute, entering this world
with an angel’s thumb pressed
to her unformed body at the very last,
a template affixed to her body
when they decided it was time
to let her go, for her to come to us
and their good work was done.
An angel’s thumbprint, a signature, her soul.

Abridged from “Her Body, Part 4. The Soul” by David Halpern

We ended up going to church on Sunday after all. I’m not going to say it was the right thing to do, although when I walked in and found this in the pew we usually sit in, I felt like it wasn’t entirely the wrong thing to do either. 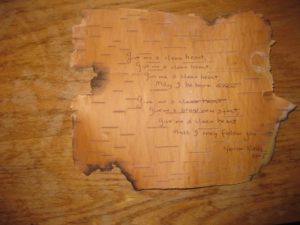 Everyone was in a bad mood Sunday morning. Johnny had woken Tom and me around 1am and I’d nursed him for a half-hour. He was not eager to go back to sleep, and Tom was wide awake anyway, so he took over and rocked the baby for another hour until Johnny finally caved in. Meanwhile, I lay in bed fretting over everything I’d read about temper tantrums a few hours before, worrying that Johnny was suffering from Second Child Syndrome (basically being neglected), anxious about Tom’s insomnia and the fact that he would be extra tired the next day. Which he was. Plus, the house was a mess and we were supposed to welcome George Harrison the Chocolate Lab into our home later that afternoon. I had no business going to church. I knew staying home made more sense. Johnny would get a real nap, and I might too. And the diapers might stand a chance of getting folded and delivered to one of their three possible stations.

But something was pulling me towards church. I missed my friends and the music. I love the idea of us all being together during a block of time on the weekends. Saturday we’d done the divide and conquer thing: each kid getting a parent one-on-one. Plus if I went to church, Tom would drive and I’d have an hour and ten minutes worth of knitting time. I am so close to being finished knitting the scarf I started for Tom in August of 2004 when he proposed to me. He gave me a diamond ring and I promised him a diamond scarf. Four-and-a-half years later, I’m within 12 inches.

By the way, there has been no attempt at nor interest in potty training since sometime last Thursday morning.

I found this wonderful quotation by Patti Smith that I wanted to calligraph and watercolor. 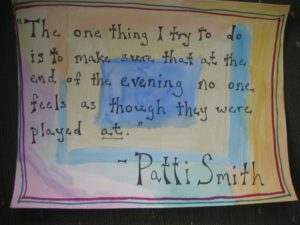 I sat with our family in the music room and focused on my letters, trying to make a decision while Tom drank tea and Lila painted and Johnny crawled around. Sometimes when I am equally divided about what to do, I flip a coin. So I went up to our bedroom, put in my contacts and washed my face. I couldn’t decide whether to put on my running shoes to get in a quick run while I still had child care, or to put on a clean pair of pants and brush my hair and go to church. I flipped the coin; heads for home, tails for West Cummington.

So I put on the clean pants, grabbed some clothes and toys for Johnny and we threw ourselves into the Jetta.

“The thing is,” I said when we were about halfway there. “We seem to do this to ourselves every weekend. We say we’re going to do less, just be together, take care of the kids and maybe clean the house. And then we do more and we end up more tired and stressed out at the end of the weekend than we were on Friday. Either we have to change our wicked ways, or I have to change the way I think about weekends. Because it’s my thought, ‘weekends are for relaxing and recharging’ that’s causing the problem. What if I thought, ‘weekends are incredibly stressful and cranky-making’? Then at least I’d have more appropriate expectations.”

Church was pretty much a blur. Lila was full of beans, racing up the stairs of the alter; Johnny was doing his pterodactyl impersonation (a high-pitched screech for those of you who have never heard a pterodactyl) and wanting nothing more than to crawl around in front of the pews. Fortunately our church is a place where this is acceptable behavior (really and truly: also, our church thinks of itself as a place where broken people go. Unbroken people don’t need church. Those of us who are carrying around these cracks in our hearts on rainy Sunday mornings––we’re the ones who need to be in church.) But even so, it wasn’t fun for any of us. Except for a few moments when Lila went down to Kids Church and I was left with Johnny crawling around. He rolled over onto his back and played with one of his toys, and I had a moment where everything was just fine the way it was. I got that everything I ever need as a parent is within my grasp; I just have to trust that I can and will get through the difficult moments. Anyway, I was able to both watch and enjoy my son and listen to the scripture (Luke 9:59-62, “Let the dead bury the dead”) and take in enough of the sermon to feel well-fed. But after that, we decided to leave early and spare the good congregants any more distraction from the Nields-Duffys. Tom took Johnny out to stand in the narthex while I collected our many baby toys, coats, hats, diaper bags, water bottles, and wrote a check for our contribution for the month of March and gave it to our friends in the pew behind us. I found Tom holding Johnny carefully, gazing out the window at the rainy view of the Berkshires, still devoid of leaves or even buds. He was crying.

“Thank you,” he whispered. “Thank you for coming to church.”

I cried too, and it felt like a gentle maneuvering of my heart into the right spot in my chest.

“Now I get why I was supposed to come to church today,” I said. “It was because I needed to cry.”

The rest of the day felt like it was in the pocket as well. The kids went down easily for their naps and Tom and I cleaned the whole house. George arrived with his former owners, one of whom turned out to be a Nields fan. I took their picture, but I forgot to ask their permission to post it here, so I will refrain. Lila has not let George out of her sights ever since. She has been leading him around the house by his spring green collar, and if there is a sight cuter than an almost three-year-old and a big docile chocolate lab, I don’t know what it is. She is very excited to give him commands. “George, fetch!” she shouts, though she’s not exactly clear what he is to bring her.

I can’t thank you readers and friends who have emailed me enough for the advice, support and most of all compassion you have given me around my struggles with parenting, particularly around tantrums. I want to share what you’ve said, so I will try to paraphrase and synthesize the wisdom that’s flown my way on angels’ wings these last few days:
-It IS a stage. Relax.
-Kids who have tantrums grow up to be interesting and creative and wonderful adults. Relax.
-Pay attention to transitions. And relax.
-It really IS a difficult time. Take care of yourself and relax.
-It’s incredibly hard to be a very small ambitious person and have no control at all!
-Pray. And relax.
-You aren’t going to spoil her by “letting her win” a few battles. You don’t need to take every opportunity to teach her who’s boss. Relax. Let her drink the water in the bathtub once in a while.
-Don’t believe the stories you make up about what a bad parent you are or what a bad child she is. You can relax about that, too.
-Sometimes the tantrums are funny. Try to see that.

Today we were tantrum-free. The stars aligned, perhaps. I was conscious of transitions and gave her a lot of presence for a half-hour before her babysitter took over.

Tonight in the bathtub, she leaned over Johnny and hugged him. “Hello, little man,” she said. “I love you!” Then Tom took Johnny out of the tub. George Harrison followed the guys out of the room (for the first time in my entire life, I am living in a household with more males than females!), and Lila and I were alone. I should say that right now, the word “special” is often code in Lila-ese for “I don’t want to have to share this with anyone, especially my brother.” So I said, “George really loves you, Lila. I think he would tell his friends and family that you are special to him. I think he would say, ‘Lila’s my special person.'”

“And you’re my special person, Mama,” she said, looking up at me and giving me one of her shatteringly brilliant smiles.

“Friends forever,” she said. (I’m not kidding.) And we proceeded to have an “I love you”/kiss fest.

Then she proceeded to drink the bath water, over my protestations. After a few minutes, I gave up and let her.

One of my favorite parenting books––okay, actually the only parenting book I’ve come close to reading––is by Jon and Myla Kabat-Zinn and it’s called Everyday Blessings. I have been picking it up recently to be reminded that everyone agrees parenting is hard, and that, as with everything, mindfulness is key. In one of the chapters, Jon Kabat-Zinn writes, “So why do it? Maybe Pete Seeger said it best: ‘We do it for the high wages…kisses.’ Children give us the opportunity to share in the vibrancy of life in ways we would not touch were they not part of our lives….they share …[their] vital nature with us and call it out of us as well, if we can listen carefully to the calling.” (Myla and Jon Kabat-Zinn, Everyday Blessings: The Inner Work of Mindful Parenting).

Yes. And those kisses.

Monday Moonday let’s hope it’s a sunny dayEverything begins on Monday Tuesday Mars Day, red hot in the stars dayMaybe I will play with Lars today Wednesday is the day…