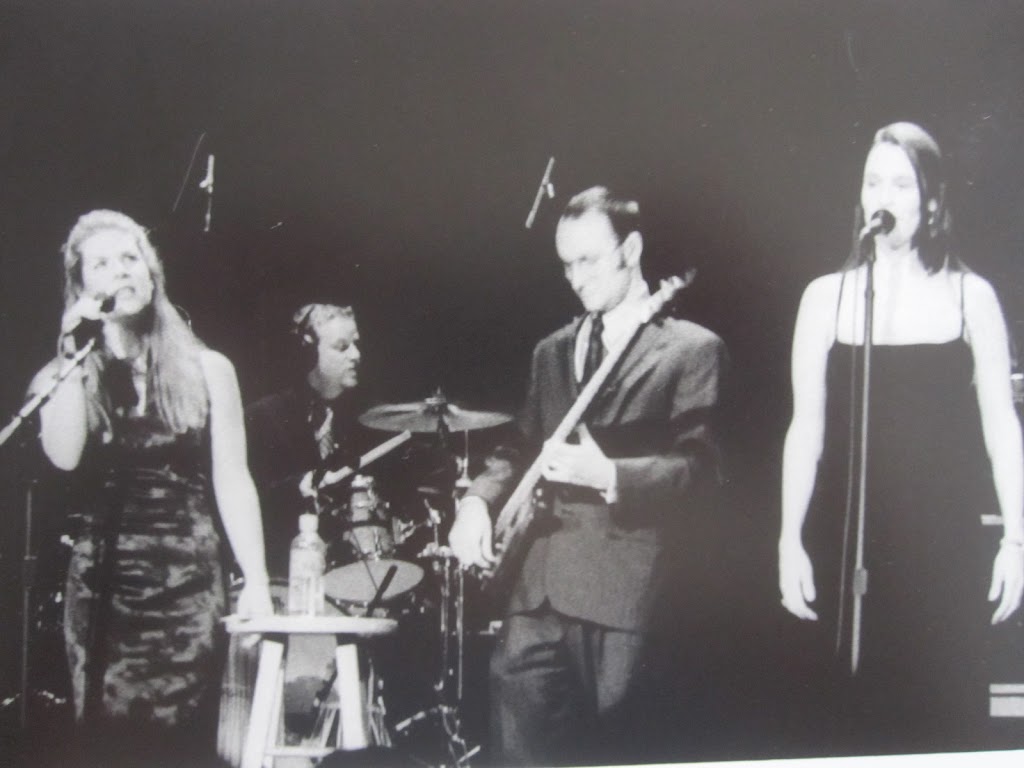 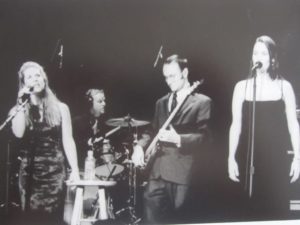 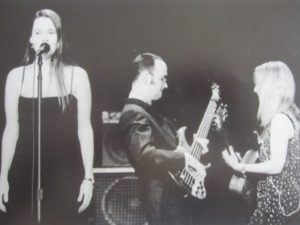 Photos from the Millennial Show we did with Dar Williams at the Calvin, December 31 1999. 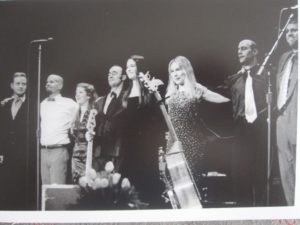 I really wanted to post every day prior to Jam for the Fans. I intended to. Every single night that I failed to, I felt sad, like an opportunity was wasted. One of the things I hate most is the feeling of a lost opportunity. “The window is closing,” is a painful thought that often occupies the piece of my mind that is concerned with my accomplishments, or the accomplishments of my children.

Monday my son got clocked by another kid’s shovel in the sandbox at his pre-school. The teachers took good care of him, but he kept his eyes screwed shut for an inordinately long time and I was called and warned that he might need a doctor’s visit. They had assumed he’d gotten sand in his eye, and possibly an abrasion from the sand. But when the doc checked him out, it turned out that the damage was from the shovel not the sand. He’s got a hemorrage in his right eye, which has turned from blue to purple. They are afraid the iris might detach. They said to keep him perfectly still. He is an almost three year old boy. This morning when I caught him hurling himself onto the couch and playing his favorite game, which seems to be called, “How Many Silly Ways Can I Fall Down,” I called the doctors and said, “How exactly are we supposed to keep him still?”

They agreeed taht we couldn’t, and consulted with each other, called me back and told me to admit him to the hospital across the street. Off we trudged, pillows under our arms, our son walking gaily between us with an eye patch over his eye like a pirate.

The sedatives failed. By the end of the day, he had not only missed his nap, but he was also careering around the room like Keith Moon on a bender. The doctors suggested we take him home. He is asleep now, but he went down fighting. I will spend tomorrow watching him.

Meanwhile, yesterday my daughter was supposed to go to her Kindergarten Buddy Day at the local school where she will become a kindergartner next September. We’d been looking forward to this for weeks. She still went, but with a babysitter, while I sat in the doctor’s office with my sad little boy. All the plans I had made for this week, this pre-Jam For the Fans week, are being readjusted. He can’t go to school and needs to be kept inside and quiet for five days. I don’t think he can come to our Family show Saturday morning.

I was talking with a writer today, someone who has worked for many years on an historical fiction, one that she’d hoped would come out in 2013 to be celebrated as part of a centennial for the event she is writing about. She has a “window” too, and she is slowly and painfully recognizing that should she choose to go with a publisher, she is not going to make the window. She was ruing the fact that she had spent so much time a few years back traveling and visiting her grandchildren instead of cranking on her book.

I always come back to that line: no one on his or her deathbed wishes s/he’d spent more time at the office. But do folks on their deathbeds wish they’d published the novel and gotten famous?

When the Nields‘ album Play came out, we were in one of the Dakotas, playing two shows at what I think, if memory serves, was a casino. I think a comic opened for us. I don’t believe we performed on a stage. Sometime on that Play tour, we had a show in a club–I think it was called Top Cat and it was in Cincinnati. There were about fifty people there, and there were no doors on the stalls of the toilets. There were a lot of potentially Big Break type things happening all the time–famous bands asking us to open for them, movies that were going to use our songs in their soundtracks, magazines profiling us. But the day to day travel was getting intense, even though Patty had masterfully figured out how to get us three and four and five star hotels at Motel 6 prices. Every time we left western MA to hit the road, I felt as though my flesh was being torn. And I was advocating for more touring. Other members of the band were so miserable that I saw we needed to make a change, and since I loved my band members more than I loved the dream of being famous and influential (riches were always secondary), I suggested we re-evaluate. It was determined that the guys would take a break while the gals continued to tour as an acoustic duo. Dar called this the Probe effect, which made sense to viewers of Star Trek: The Next Generation. Katryna and I did Lillith Fair, opened for Cry Cry Cry and Cake while the Daves pursued other careers, and continued to play with us at least once a month. (David Nields started teaching drama again, Dave Chalfant began his producing career, making records for Ben Demerath, Erin McKeown and Stephen Kellogg and the Sixers; Dave Hower joined some other bands, including the WinterPills and Spanish for Hitchhiking.)

We made one more album together, though, and at the time we didn’t know it was going to be our last. I think we really believed that Katryna and I would be a successful probe, and that once we established ourselves fully, we’d bring back the band, this time in a tour bus. We were obsessed with the tour bus idea. Somehow that would have solved all our problems.

So we made If You Lived Here You’d Be Home Now, which was our favorite CD both to make and to listen to. I documented the experience of recording this CD and published it in the songbook that went with the album. here is the first entry:

May 3, 1999– It’s raining, again. It’s our first day back in the studio and I am–how do I put this delicately– terrified. We have fifteen songs to record in two months, half of which we’ve never even played together, several of which I couldn’t even play by myself if I wanted to. This is by far the biggest challenge we’ve ever faced as a band, but, hey, this is what we wanted. We wanted to make this record on our terms, and that means focusing on the song: figuring out how to make each individual song a jewel; how to let each song be its own absolute self. But will our fans freak out if we stick French horn on “Jeremy Newborn Street”? Hey, it’s not 1966 and this isn’t Pet Sounds. Before, we’ve always tried to capture on tape what we do live. It was a source of pride to us that our records represented our work, the work that the five of us do together, the magic the five of us make together. Our records were just that: records of where we were musically in a given year. Still, people have always told us, ever since we were a trio, that we were much better live than on record. So we are trying to make a record that stands on its own, hopefully in somewhat timeless way. A record that cannot and should not be reproduced at a live show, like the Beatles, post 1966, post Rubber Soul. A record that is an entirely different animal. Our live versions of these songs will be changeable, and our die-hard fans can bring their mini-DAT players to our shows underneath their coats and jackets and chronicle exactly how the songs change over the years. But now, for today, we are committing to versions of these songs on Dave Chalfant’s ADATS to be turned into CDs or DATs or minidiscs or whatever format earthlings will be listening to one hundred years from now; definitive versions of these songs that hopefully will be THE version people keep in their heads, hearts, ears and stereos. And therefore, we are setting foot into the unknown. My least favorite place.

I had a vision for Jam for the Fans, and it might not materialize the way I’d hoped. Things do not always go according to our plans. I still hate the unknown. And yet. Last week, the CrackerJack Band convened at Sackamusic studio and we ran through the set. I could not wipe that goofy grin off my face for the next two days. Playing with my band is one of the biggest highs of my life. Does it compare to holding my wounded son or practicing violin or walking hand in hand with my skipping five year old girl? Nope. But I am glad I get to do both. And if we had that tour bus, I might not get the latter. And if I didn’t trust the beneficence of babysitters, I wouldn’t get the former. We think we have these windows, and maybe some of them are real. But some of them are illusions. We’re always at the mercy of the unknown.

Saturday morning, I woke up with Johnny asleep in the crook of my arm, as usual. I lay for a long time watching him breathe, watching the perfection of his…