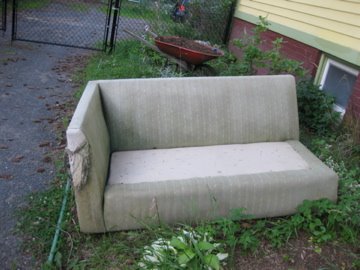 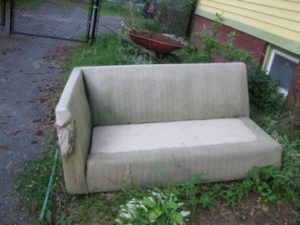 My parents bought it in the 80s. It was our first and last foray into the world of sectionals. It had two sections! One was a three-seater, with respectable arm rests on both sides, and the other was a kind of love seat with a missing arm rest so that you could make an L shape between it and the larger piece. The only thing wrong with it in our teen-age minds was that it was white. Because given my entire family’s proclivity towards spilling beverages (or really, anything) it wasn’t white for long.

My parents spent certainly more than the couch was worth to recover it in forest green. And we moved the smaller section so that it faced vertically toward the TV. What a revelation! You could sit and watch TV with your legs out in front of you! The problem was, only one of the five of us could sit that way, so we three girls fought constantly about who got the love seat. I usually won because I had a boyfriend and argued that love seats were for LUUUUV.

When my parents developed some better taste, I inherited both pieces sometime in the late 90s, and this couch moved up to Massachusetts where it sat in my music room and on which I wrote all the songs from Play, If You Lived Here You’d Be Home Now, Love and China and This Town Is Wrong. My good luck songwriting couch. It’s the couch where I’ve taken countless naps, eaten many years worth of meals, made out for the first time with my husband. It lived in the writer’s room of my current house and many other writers graced it with their fine muses.

Did I mention it kind of smells? 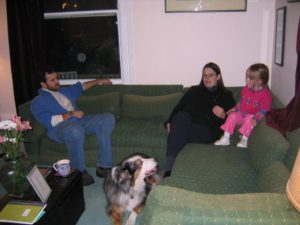 Here is the couch in 2004, a few days after Kerry lost the presidential election. We were having a party to cheer ourselves up and agree to work for peace and love our Republican friends and relations despite our deep grief and frustration. Katryna is about 20 days away from giving birth to William. The dog is the late great Cody, Tom’s Australian Shepherd.

Speaking of Tom, he has never liked the couch. “Please please please get rid of it!” he begged me. We were given a fancy Pottery Barn couch when we got married, and at this point the larger sectional moved to the music room where it once again functions as the TV watching nap-taking couch. Also, Elle’s favorite thing to do in the entire world is to take its eight pillows off of it, build a fort with them and generally toss them all about the room, jump on them and rip the stuffing out of them. (More on that anon.) The smaller sectional has migrated all over the house we now live in; at one point it was on the third floor in our impossible-to-access attic office space. For several years I used it as my primary life coaching couch (say that 5 times fast.) (This is the main reason Tom hates it. I make him move it every few years.)Up until last week, it had been relegated to the front porch where one of the writers who comes to my weekly groups favored it as a spot to write poetry. When I begged Tom to let me bring it back indoors so that I could have a spot in the kitchen to recline for breastfeeding Jay, Tom said, “That’s like asking, ‘can I bring tangible depression into the house?'”

A few weeks ago we noticed the wasps. Tom was washing the windows when he got stung. We monitored him carefully to see if he had developed the allergy that makes one stop breathing, and kept our eye on the hospital across the street to make sure it was still there just in case we needed to rush him over. He was fine, but we decided we couldn’t live with a wasps’ nest right next to our front door. But how does one destroy a nest that is inside of a couch?

Answer: spray it with a ton of toxic chemicals.

Actually, we still don’t even know if this is accurate, as there still seem to be some wasps hovering around the couch, which Tom dragged in several stages to the side of our house where it rests as of this writing. So what should we do? We can’t take it to the dump; even if you ignore the tremendous environmental irresponsibility of throwing away a gigantic piece of furniture, how mean to the good disposers of garbage to leave them with a possibly active wasps’ nest?

We can’t freecycle it for the same reasons. Our friend Alice said she’d come by with her truck and take it, but really. How?

Meanwhile, both of us inexplicably developed a tenacious fondness for the remaining sectional, even though, as I said previously, our children have ripped open the fine workmanship on the upholstery and Jay is now pulling pincer-grip sized fingersful of asbestos-like filling and attempting to eat them. 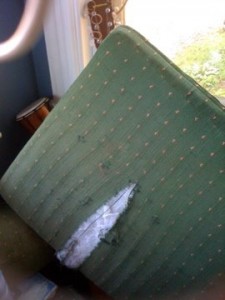 So we have rejected the option of buying a new couch. Instead, I had grand visions of re-upholstering the couch myself, rending it thus: 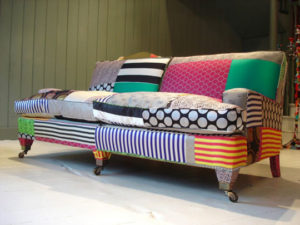 But because I have a book which I should be writing now instead of blogging about the couch we can’t get rid of, I opted to take the strange extra pieces of material that inexplicably cover the armrests and make a patch which I sewed by hand onto the cushion like so: 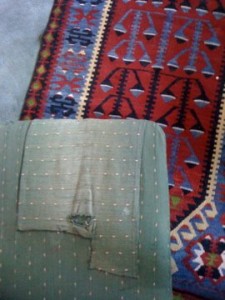 The prisoners of infinite choiceHave built their house In a field below the woodAnd are at peace. It is autumn, and dead leavesOn their way to the riverScratch like birds…

One day in late April, when The Mask Wars were just beginning, my daughter and I went for a walk in our park. Just as we were turning into our…

Maybe God Is A Harried Parent

Maybe God is a harried parent just like, say, me.We say, “God used to do great things, Like create the world And set it in motionBut now He’s this lame…