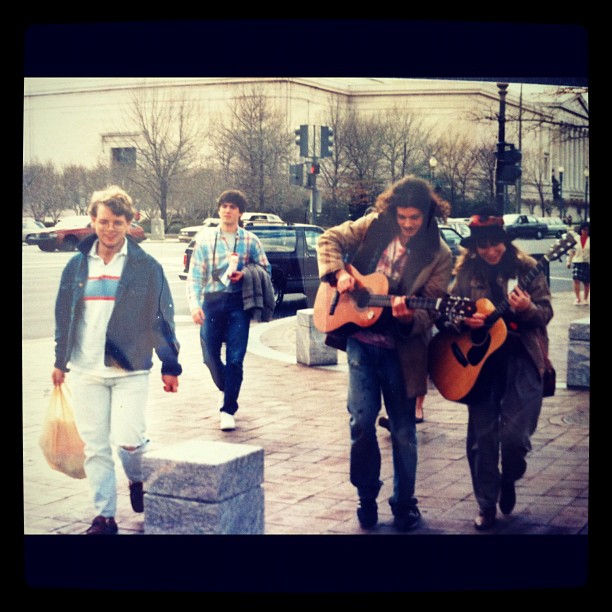 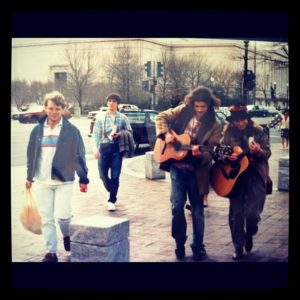 “I wish, I wish, I wish in vain
That we could sit simply in that room again
Ten thousand dollars at the drop of a hat
I’d give it all gladly if our lives could be like that…” -B. Dylan

I finished the amazing Just Kids, Patti Smith‘s memoir of her relationship with Robert Mapplethrope when she was in her early twenties, at the same time my early twenties meme chose Tangled Up in Blue was celebrating its 25th anniversary. Katryna and I came to celebrate and open the show for them. 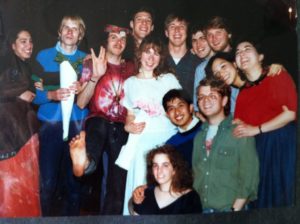 Tangled Up in Blue started in the fall of 1987. I’d almost lost my voice to nodes the summer before, shrieking “Born in the USA” an octave up from Bruce to 300 campers a day, and in my forced silence (3 1/2 weeks of complete voice rest plus steroids was my prescription) I made a vow: should I get my voice back, I would no longer hide it as I had freshman year at Yale. Too scared to audition for the a cappella groups, or to play any of my own songs outside my bedroom, I was at risk of drowning in my sea of insecurity. If my voice came back, I would do something. Something big.

But until then, I’d do something fun. Why not start a folk singing group? Yale didn’t have one. We could sing some old songs, Peter Paul and Mary arrangements with an added bass part. I asked my then boyfriend Trex what he thought. Previously a non-singer, Trex was always up for anything, “I’ll get the entire FOOT crowd,” he said. “I’ll get the Berkeley common room.” And he got both. He said, “Show up with your guitar at 7pm Tuesday,” and I did. In my hand I clutched my first arrangement” “Come Go With Me To That Land,” in my rhythm-challenged notation. We had about ten people there that day; the following week we had fifteen. The third week we were back to ten, but we had at least one per part (always shortest on tenors) and that was good enough for me. At some point, towards the spring, Leon Dewan joined us on lead guitar, and we had our first “jam” (as a cappella concerts are called, at least they’re called that at Yale.) 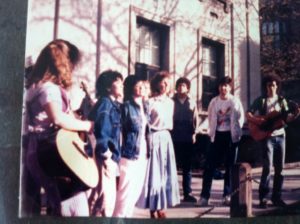 The other brave thing I did was “rush” the mainstream a cappella groups. In the middle of our second or third rehearsal, members of Proof of the Pudding swept in and sang me out of the Berkeley Common Room, members of what would become TUIB looking on with some pride and perhaps confusion. A few days earlier, I’d heard that I’d gotten into the Yale Glee Club. I was now in three singing groups. Would I come back to them?

Well, of course. In those very first rehearsals, I knew I’d found what I’d been looking for: a group of people with whom to share what I loved most: music, activism, laughter, politics. In the years that followed, I eventually quit everything but TUIB, letting the music direction fill the evenings that weren’t taken by Shakespeare, classical guitar, poetry and my own songwriting. The first friend to come out to me was a freshman from Tangled Up in Blue. I was initiated into the counterculture; me a nice Democrat from an upper middle class Virginia home. 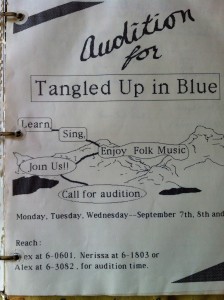 The fall of my junior year, the group held its first auditions, and to our amazement, people actually showed up to try out. We worked hard those years, but mostly we were having fun. I pushed the group to be more precise musically, and some folks left because of that. During March spring break, we decided to go on “tour” and hopped in some cars and drove down I-95 to stay, half of us at Trex’s mother’s house and half at my parents’. We performed at my old high school and made enough money to pay for our gas and several huge spaghetti dinners.

We climbed back into the assortment of cars we used to get anywhere–my 82 Chevette with the broken window and missing rear view mirror and Trex’s Mitsubishi that I’d totaled the year before–and made the pilgrimage to the Bowery.

It was a crisp spring day, and it was still light when we arrived for sound check. The club was empty except for Jimmy at the bar who let us in and swung around to the soundboard as we clambered up the stage. The place reeked of beer and piss and vomit. The walls were covered with beer cans. The stage was chalkboard black. I was afraid it would bite me. I was not entirely sure this wasn’t the headquarters for satanic rites. It was so dark inside I forgot it could be light anyplace else. And I felt like I might levitate with excitement. Jimmy said if we brought him a blank tape, he’d tape the show from the board for us. We ran around the corner to a bodega and brought him back a Maxell casette. As I was tearing off the plastic wrap, Joe Shieber, our excellent tenor said, “Nerissa, you should play one of your songs.” I froze. I’d never performed a song I’d written in front of anyone all alone, by myself, other than this group of people.

“Only if Leon plays one of his,” I said.

We mounted the stage at 12:30 on a Wednesday night. We did our repertoire: “Come Go with Me to That Land,” “Seven Bridges Road,” “Hangman,” “The Times They Are A Changing,” “Ohio” and “Hurry Sundown.” I played a new song by myself called “Agape.” Leon played “Farm of Isosceles.” There were two people in the audience and I think we made two bucks.

A few months later, or maybe it was the following year, we went as a group to see and hear Pete Seeger, along with Mikata, at the Shubert Theatre in New Haven. After the show there was a VIP gala upstairs. We galloped through the red velvet cordons and formed our horseshoe, singing “Wimoweh” to the Holy One. He excused himself from some major donor he’d been talking with and came over to listen to us kids. “Wonderful,” he croaked. (He was about to turn 70 if I have my dates right. It’s amazing how long a person can be old.) “You all should think about coming to Peekskill. I’d love to organize a workshop on rounds.” 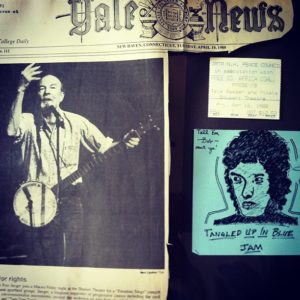 We floated home that night, extolling Pete’s (underappreciated) skills on the banjo, gazing at his autograph (which we then used shamelessly in a “teaser” for our next Jam), feeling certain that we had arrived. 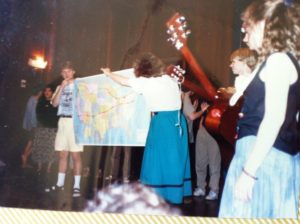 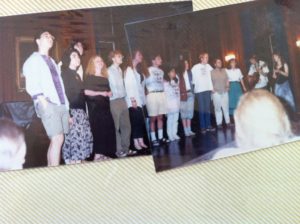 When I graduated, along with many of TUIB’s founding members, we decided to celebrate by driving around the country in Steven Michel’s father’s Suburban (Ben) and a rented minivan (Jerry). Above is our plotted route. We spent many a night in sleeping bags on the floors of the homes of alums and kind parents, and we ate a lot of pizza. We sang at Old Faithful and made $75, and we saw the Grand Canyon and Paolo Soleri’s Utopia at Arcosanti.

As I was unpacking from this trip, in my first post-college apartment, I had Bob Dylan’s Dream playing on my turntable. (Yes, a TURNTABLE!!!) I had to stop what I was doing and sit on the bed, tears streaming down my face. It took me about two years to stop grieving what I lost when I left college and TUIB behind, and the only thing for it was to start a new band.

By the old wooden stove where our hats was hung
Our words were told, our songs were sung
Where we longed for nothin’ and were quite satisfied
Talkin’ and a-jokin’ about the world outside

I wish, I wish, I wish in vain
That we could sit simply in that room again
Ten thousand dollars at the drop of a hat
I’d give it all gladly if our lives could be like that
Copyright © 1963, 1964 by Warner Bros. Inc.; renewed 1991, 1992 by Special Rider Music

The Day the Music Thrived

Nerissa, Emma and Sophie on Bill Newman’s radio show WHMP to promote The Day the Music Thrived This concert is happening. THE DAY THE MUSIC THRIVED TO SHOWCASE ART, MUSIC,…