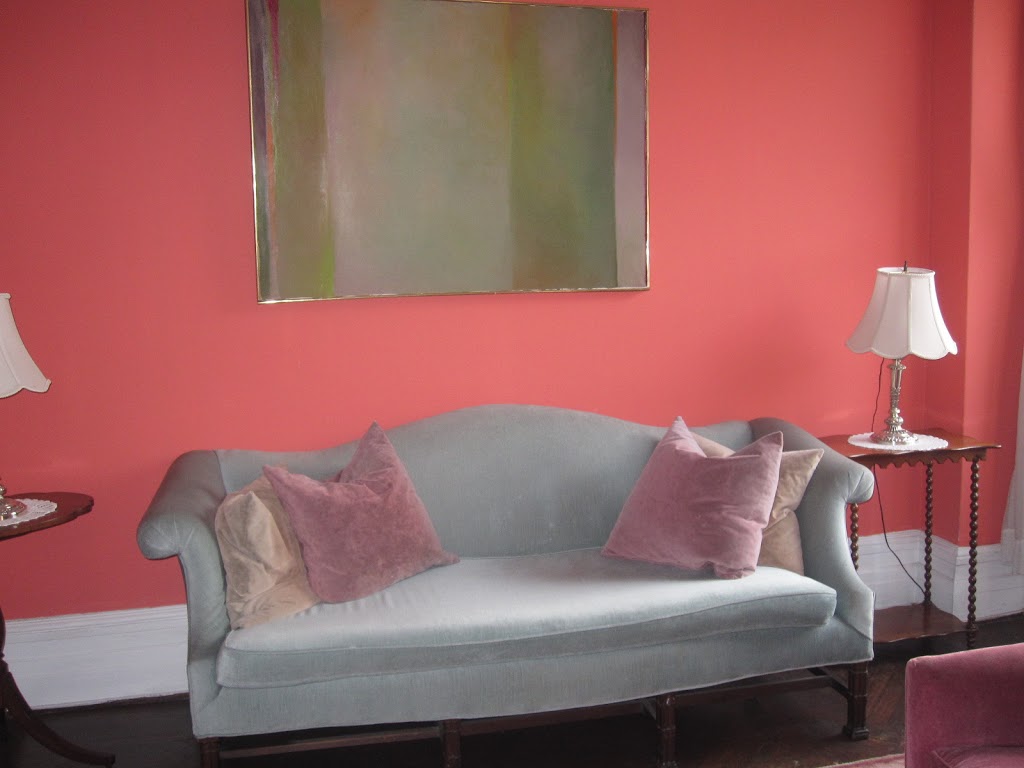 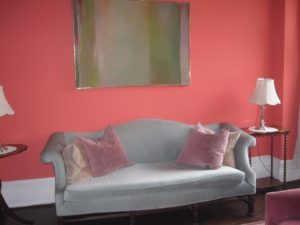 After our gig in Watchung NJ last weekend, Katryna and I spent the night for the last time at our grandmother’s apartment in Manhattan. Readers of this blog will recall that she died at the age of 103, in her home, last July. Since then, her daughters have been painstakingly going through her effects and trying to decide what to keep and what to throw away. As you might imagine, there is much to keep, even if it seems of no value. I don’t know how they are doing it. Every third item they pick up is drenched in history, significance, some kind of import connected with a woman who outlived a century, and who happens to be their mother. Even the shoelaces seem to hold value. As someone who hates clutter (and yet can’t let go a single paper I wrote even a line of lyric on, let alone a drawing by one of my children) I do not envy them this task. I have a rule: I can’t bring anything into my house unless I give something else away. And as the recent beneficiaries of several lovely pieces of furniture from my mother-in-law, we don’t have a lot of space anymore. As my mother and aunt ask me what I would like to take from the apartment, I feel as stymied as they do. What do I really want? What will bring my grandmother to mind in a lovely quotidian way? And what is just 80-year-old clutter?

Even the things of value are suspect. The books, for example. Actually, the books are the perfect example: they pain me so. No one wants them. What of the Encyclopedia Brittanica? I lusted after these volumes when I was a high school student, begging my parents to buy me a set only to be told they were too expensive. Now I can have my grandmother’s–but why? Who needs 120 pounds of dusty old books when there’s Wikipedia? And the books are dusty. My eyes water when I get near them. Will my kids really read them? Will their information from 1945 even be accurate?

And no one else wants the books. They are not worth that much, and do I really want to box them up, lug them down seven flights, pack them into the van and drive them home, and then search for space on our limited shelves? I can have the complete collection of Shakespeare on Kindle for free, after all, and that weighs about four ounces and takes up approximately one centimeter of shelf space.

But I haven’t quite cottoned to the Kindle I was given for Christmas. After the initial excitement–and a week of the stomach flu during which time the only thing I could figuratively stomach was reading snippets on the Kindle of books on the Amazon website, which sadly led me to inadvertently purchase Portia deRossi’s memoir on anorexia (oops) –the device is shoved into my book shelf next to the real books. I love real books. I have way too many. And so I stood on the stool next to the bookshelf, hovering. Should I take the Shakespeare? The Dickens? The Encyclopedias?

The apartment is a mess. When I talk to my mother about the huge task she has been involved in since last July, I want to swoop in and support her, wielding boxes, sharpies and packing tape, me a whirlwind of efficient helpfulness. And yet when I enter the space myself, I am overcome by a powerful inertia that is hard to explain. My mother and aunt had eleven days to empty the apartment, and the last time we were all together, I found them sitting on the floor each going through separate photo albums, exclaiming about their tiny young selves, their adventuresome mother (who traveled to every continent but Antarctica, I believe), seemingly oblivious to the enormity of their task. And yet I too felt suspended in time. I too couldn’t figure out whether we should keep the yards and yards of raw fabric my seamstress grandmother had piled in one of her closets. “Here’s a half knit sweater,” my mother said, her voice pleading over the phone. “You are our knitter; do you want to finish it?” That time, I was paralyzed with indecision and left carrying just a paperback volume of the Upanishads from the seventies.

This time, we took a top hat that had belonged to my grandfather, and a tiny blue tulle ball gown. I will have to alter it; my grandmother weighed about 90 pounds for most of her life. Katryna and I are going to dress up for a photo shoot to commemorate our 20th anniversary of being professional musicians.

It takes time to make these decisions. The articles I kept from the estate of my other grandmother who died in 1996 are still precious to me; even such things as the cheap aluminum stew pot and the circa 1972 spatula, and the cracked unmatching china pieces. Every time I use these things, I think of her. Grief takes up time; books take up space. And for me, both are worth it, even when I think otherwise and want to barrel through with hard nosed efficiency.

In the end, I took the Shakespeare and the Dickens and left the rest. All week, my writers used the old volumes for prompts. On the inside cover of the Shakespeare, reads This is a limited edition of which 500 were bound. You are holding,” and in red handwritten ink, “No. 158.” They were published in 1899.

Today the rest of the furniture arrived. The weather is finally thawing up here in Massachusetts, and my kids danced on the porch and sang songs of joy to Shane and Miguel, the moving men who brought us my grandmother’s couch, her bedroom rug and some other pieces. My mother got on a train this afternoon, and when I spoke with her, she was more tired than I have ever heard her. There is a second death in the releasing of these things that bind a person to the earth, and in letting them go, it can seem as though we are abandoning the beloved. I am glad we did the sorting, and tonight Elle and Jay bounced on the new (old) couch which I had bounced on as a child as young as either of them. Maybe one day one of them will claim it for his or her own and my grandchild will be bouncing too. 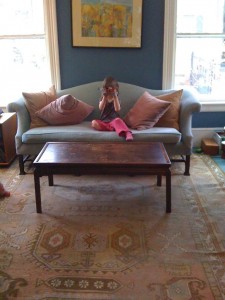 Jam for the Fans and Bloomsday

Katryna and me at the open mic/Nields Karaoke Friday evening at the Tuesday Market Space behind Thornes. (Photo by Jeff Strass). We thought at the moment to sing a non-Nields…

My friend Judy Hooper, the writer, introduced me to a word I needed badly to know: saudade (pronounced ‘soDAHday’)—a Portuguese word for which there is no proper English translation. It…