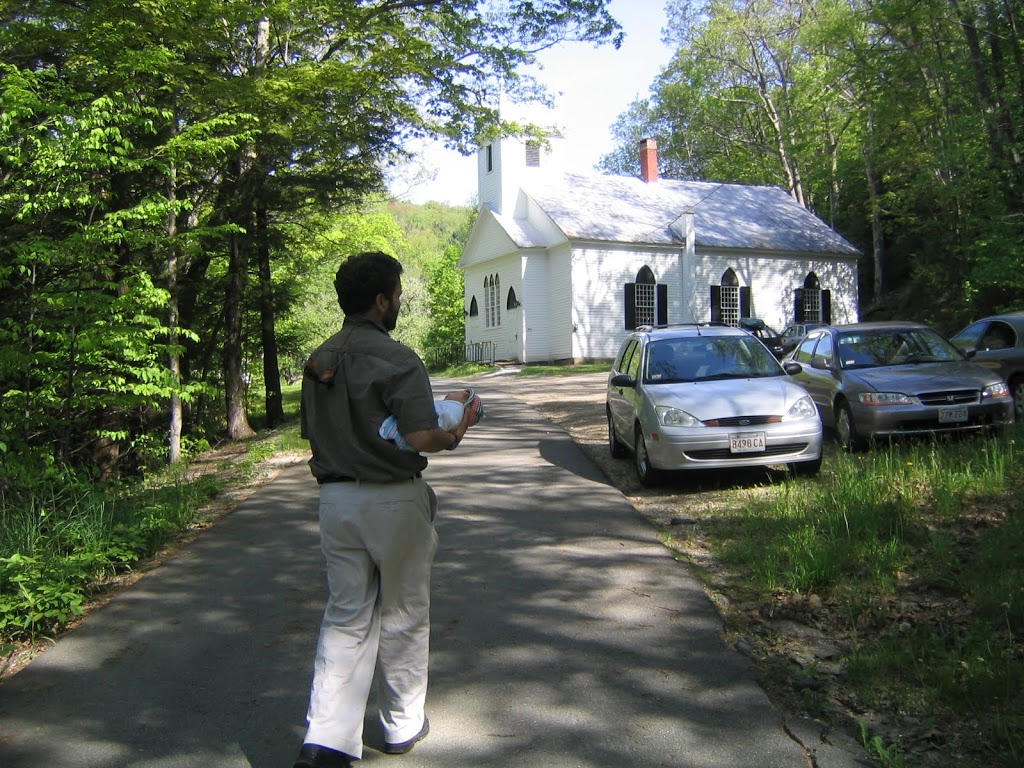 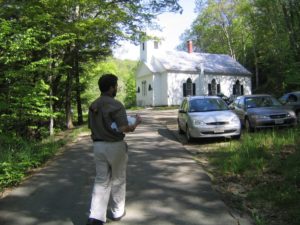 Tom carrying our 3-week-old up to our church on Arnold’s birthday, May 2006 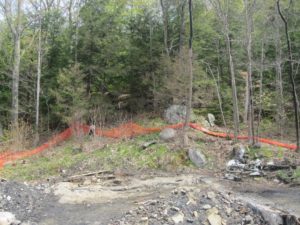 “The spiritual path wrecks the body and afterward restores it to health. It destroys the house to unearth the treasure, and with that treasure, builds it better than before”
RUMI

Today would have been Arnold Westwood’s 89th birthday. I am remembering his infectious smile, his unflagging enthusiasm for our church, his love of the shoreline in Little Compton RI and his admonition to all of us a year ago at this time, when he preached his final sermon at the West Cummington Church, to “ignore exercise at your peril!” And I am thinking of him because this Saturday May 22 we are doing our annual gig at the West Cummington Church.

Except this year, there is no church standing in West Cummington. The church burned down on January 17. While the congregation has now officially voted to rebuild, and to rebuild on the site, in quite the style and manner of the old church with the addition of two very welcome bathrooms (there were none before, and parishioners had to walk a good seven minutes to the Parish House down the road), rebuilding is a long way off, and a big job. The show we are going to do this year is a benefit for this rebuilding. The Village Church in neighboring Cummington has been gracious enough to host us.

I have rarely looked forward more eagerly to a show. I can’t wait to sing the new songs we have been accumulating since the fall. We plan to debut at least two new ones, and to fill the room with everything that’s been brewing in our hearts for the past year. I for one am especially grateful to have back the use of my hands. I am typing this post, the first one I have been well enough to type since February when I was waylaid by Carpal Tunnel Syndrome (which I wrote about here). Like a person who wakes up after a two week flu feeling miraculously better, I stretch my wrists back and forth, amazed at the miraculous flexibility now achievable in those joints I used to take for granted. I can’t wait to see my people on Saturday. I can’t wait to sing with my sister. It’s May. It’s just over five years since I stood in a similar church and took my wedding vows with my husband Tom. 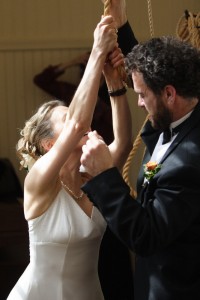 It’s just over four years since my daughter was born. Arnold used to make a big birthday cake for all the May babies. When Elle was just fifteen days old, he added her (real) name to the cake. 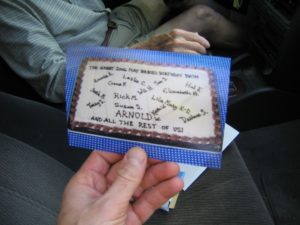 I’ve been on a strict no-blogging diet as of late, as the rough draft of our book is due on our Shambhala editor’s desk in a month. I am eating, drinking, breathing, sleeping The Musical Family. And this makes me think, of course, of The Sound of Music.

The Sound of Music is certainly (okay, probably) my all-time favorite musical, as it was the very first musical in which I was cast. I was 1977 and I was ten and in fifth grade. A big (literally) director named Calvin Remsberg came to my school to cast the seven Von Trapp children. I was one of those picked, and the experience was akin to dying and going to heaven, winning the lottery, the Grammy and the Oscar and getting chosen as number one on Todd Shey’s Like List. My mother drove me to rehearsals every afternoon, and I got to hang out with gigantic, amazing teen-age girls at their fancy theatre while they in turn doted on me, called me “Marta” (my character’s name–remember Marta? Second youngest.) I wore my long straight hair in two braids which the wardrobe lady curled under and fastened into large loops that resembled beagle ears (coincidentally, as a teenager, I wore those same long beagle braids in my role as Snoopy in You’re a Good Man, Charlie Brown, on that same stage. But that’s a whole other story.)

The musical was my first experience in a real play, with a real director (who has gone on to be a big shot–he stared in off Broadway productions of Cats as Old Deuteronomy and in Sweeney Todd…) But it was also my first experience fitting in with a group of people who seemed like my long lost tribe. I loved everything about the theatre. I loved the way the basement smelled, I loved the lights, I loved the way you could sit in the auditorium on seats that bounced up against their backs when you stood up, and the way you could drape your calves over the seat in front of you. I loved the make up, the costumes, memorizing my seven or eight lines “My name is Marta and I’m going to be seven on Tuesday, and I want a pink parasol.” I loved my “siblings” and truly believed that they were my brothers and sisters. I loved learning, for the first time, about Austria in the Third Reich, and the evil Nazis and World War II and the Trapp Family Singers who now lived in Stowe VT. (I of course read all the biographies and autobiographies about Maria Von Trapp and how Howard Lindsay and Russel Crouse had changed many of the names of the kids in the staged musical.)

Most of all, I loved the music. I loved having a part to sing. I loved the choreography where we got to poke our heads out like cuckoos in a clock. I loved the way music saved Georg von Trapp from marrying the horrible baroness and instead fell in love with the lovable, unsolvable Maria. That story planted itself deep within my psyche–that music saves, that music is like the blood that runs through a family, connecting it, oxygenating it, renewing it, healing it, nurturing it.

And yet, believe it or not, I had never seen the Julie Andrews movie version until last week! How I managed to deprive myself of this pleasure, I don’t quite know, except that I guess as a ten year old in 1977 it would have been challenging to watch it at will. This was pre-Beta Max, after all. Besides, someone I respected (most likely, Calvin Remsberg) had suggested that the staged Mary Martin version was far superior. So, loyal to a fault, I was given the LP soundtrack for Christmas that year, and that was good enough for me.

Anyway, I watched it over the course of the last week, which is pretty much the way I watch all movies lately. I only have about a half-hour a day, three days a week where watching a DVD is even possible: Mondays, Wednesdays and Fridays when Elle is at school and Jay is taking a nap. I sit in front of the TV, soaking my right hand in hot water and Epson salts and then icing it, while eating with my left hand. I let Elle watch the first half-hour, and while she liked it enough so that she makes me tell her the story every night at bath time, she does not want to actually watch it anymore. She thinks the dad is too scary.

I can relate. Marta’s last line is “I’m scared.” Looking back on this winter of losses (the church, my mother-in-law Mary Duffy and ––mercifully briefly–– my hands), I see how fear ran through these experiences in ways, though inevitable, were not helpful. As I wrote about the church, my first reaction was of pure horror: I had feared that the arsonist who had been responsible for multiple Northampton fires had a copycat in West Cummington. When I learned that the fire had been started by a faulty furnace, my fear turned to grief, and then hope and faith in our rebuilding efforts. 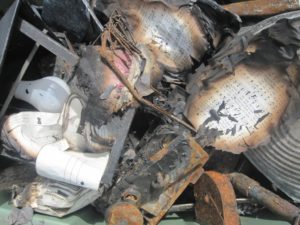 Debris from the fire a the West Cummington Church

My mother-in-law’s death was harder, of course. But there was something in her full-out embrace of death, her passionate faith in her vision of being reunited with her late husband, that challenged me to my core (“cor” being the Latin root for “courage.”) I am used to fighting illness, to taking every possible measure to “rage rage against the dying of the light.” It was foreign to me to do otherwise, but for her sake, I let her go. 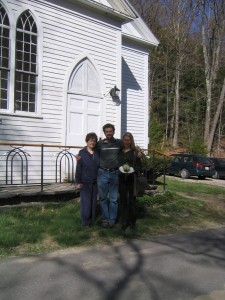 Tom, Mary Duffy and me in front of the West Cummington Church at our wedding rehearsal

Leaving me with a ton of excess fear I didn’t know what to do with, and perhaps it went to my wrists. I will never know, but I do know this. One day about three weeks ago I made the decision not to believe that I needed surgery or shots. I made the decision to experience the pain as a kind of muscle ache, as the pain of growth, of childbirth, rather than the pain of injury, where to access the pain is to create damage. I was in a yoga class, with the intention to do a fully modified practice. But during the meditation at the beginning, I suddenly had the thought, “When I play the guitar, I think: this will hurt, but I will be okay. And I always am. I am going to take that attitude towards this yoga practice right now.”

And so I did. And lo! I am healed. Yes, sometimes there is some stiffness, some slight pain, and yes, I am working organically on my posture and the ergodynamics of my writing situation, and no, I have not done a handstand yet (though I do a wicked pinchamayarasana), and I am madly in love with a product recommended to me by the fabulous Trina Hamlin called Traumeel (homeopathic anti-inflammatory cream that does not stink.) But I am not afraid. I am getting better.

Today I finished watching The Sound of Music. As the family crosses those Swiss alps, little Gretl on her father’s shoulder’s and Marta being guided gently by Maria, I wept. From the top of those alps is quite a view.

I haven’t been posting because every time I have something to say, the world changes to make my insight obsolete. We don’t know what is going to happen, how long…