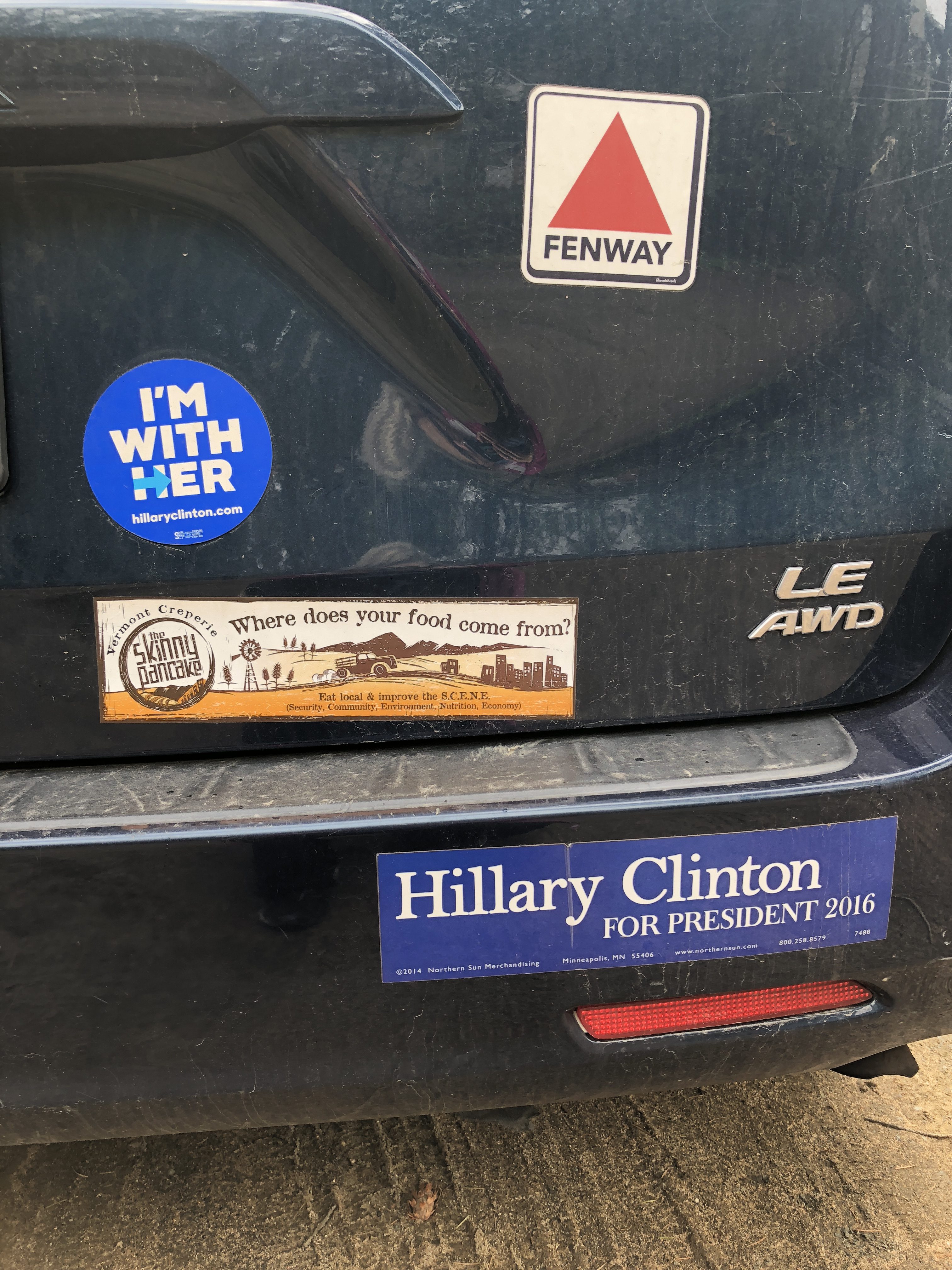 As I was waiting for the light to turn at the intersection of King Street and Damon Road, I felt someone in the car next to me trying to get my attention. I looked over. I had been thinking of good things–my daughter’s impending 12th birthday, my Local Chorus, my Little Blue studio rising daily, my new novel––and it took me a moment to focus on what I was seeing, or rather, being shown. It was a small sign–about 10″ x 10″––full color. A photo of Hillary Rodham Clinton laughing, and below her image, in big red letters, LOCK HER UP! In smaller letters, TRUMP. My brain tried to make a story out of this–ironic? Twisted sisterhood?––as a woman’s head appeared above the sign, her eyes glittering under heavy brown bangs. She gave me a triumphant grin and bobbled the sign slightly, just to make sure I hadn’t missed her point. Then she hid behind it again. The light still didn’t turn. She put the sign down and picked up a sheet of paper with tiny, smudged, industrial-looking writing on it. I kept my gaze on her, hoping to catch her eye again, because…why? I wanted to make peace, somehow. I wanted to give her a chance to be a human. To see I was one, too.

When the light changed, I let her car go first. A black Volvo with a flag decal and a Jesus fish. She must have read my car the same way–and there’s a lot to read on my car: three Hillary stickers (still…), some Farm Local material, Eat More Kale, and a red bumpersticker my daughter bought and affixed herself that reads: Feminism is the radical notion that women are people.

I felt physically ill as her Volvo took the exit ramp onto I-91 North. I drove slowly to the River Valley Co-op, keeping to Rt 5. My veins felt like mercury flowed through them instead of blood. I trembled and felt faint, so I breathed slowly. My van’s CD player changed to Allison Krauss’s “Down to the River to Pray.”

I pulled into the co-op parking lot and sat for a moment trying to cool my anger and fear. I could see the river through the trees on the other side of the highway, the other side of Rt. 5. My body was still in some kind of shock. Why? Maybe it brought me back to that horrible sight I woke to the morning of November 8, 2016: three Trump/Pence signs on the median in front of our house. It had been as shocking and unexpected in my neighborhood as a swastika. I live in a state of mild denial most of the time, and truly believe that those responsible for the outcome of the 2016 election are far far away, as far away as death was when I was a little kid.

This very childish, child-like fear I have must be shared at some level with the woman in the Volvo. This seems to be where we, as a country, have arrived. We are all acting from very young, wounded places. As I took another deep breath, I thought about the energy of a bully; how bullies act out based on how they were treated as kids. Their meanness is usually in direct proportion to their own sense of powerlessness. We all know now how powerless the Trump voters felt in 2016.

Inside the grocery store–full of aging hippies and harried progressives––I wanted to tell someone. I knew I’d be understood. But I am committed to laying down sword and shield and walking away from binary thinking on this. Not that I won’t work like hell to win the House and Senate back for the Democrats–don’t get me wrong–but I didn’t want to feed the fires inside my own soul.

There was balm, after all. It was May Day, my favorite holiday. And I mean both International Workers Day and its precursor, the pagan festivals in England, where real spring comes as late as it does here in New England. I grew up dancing around May Poles and watching the grown-ups at our school dress up like hobby horses, men putting bells on their pant legs and dancing with each other. And the day was perfect May: warm enough for shorts, cool enough to keep the flowers from bolting. The forsythia flashed boldly, and the hyacinths perfumed the air. My contractor let me have my very first use of Little Blue, even though we are several months away from completion. There is just one working electrical socket, so at 7pm, I plugged in a floor lamp and a string of lights, duct-taping them along the long door/windows, and brought over my guitar, my boxes of Local Chorus songbooks, and a couple of 6th grade helpers. 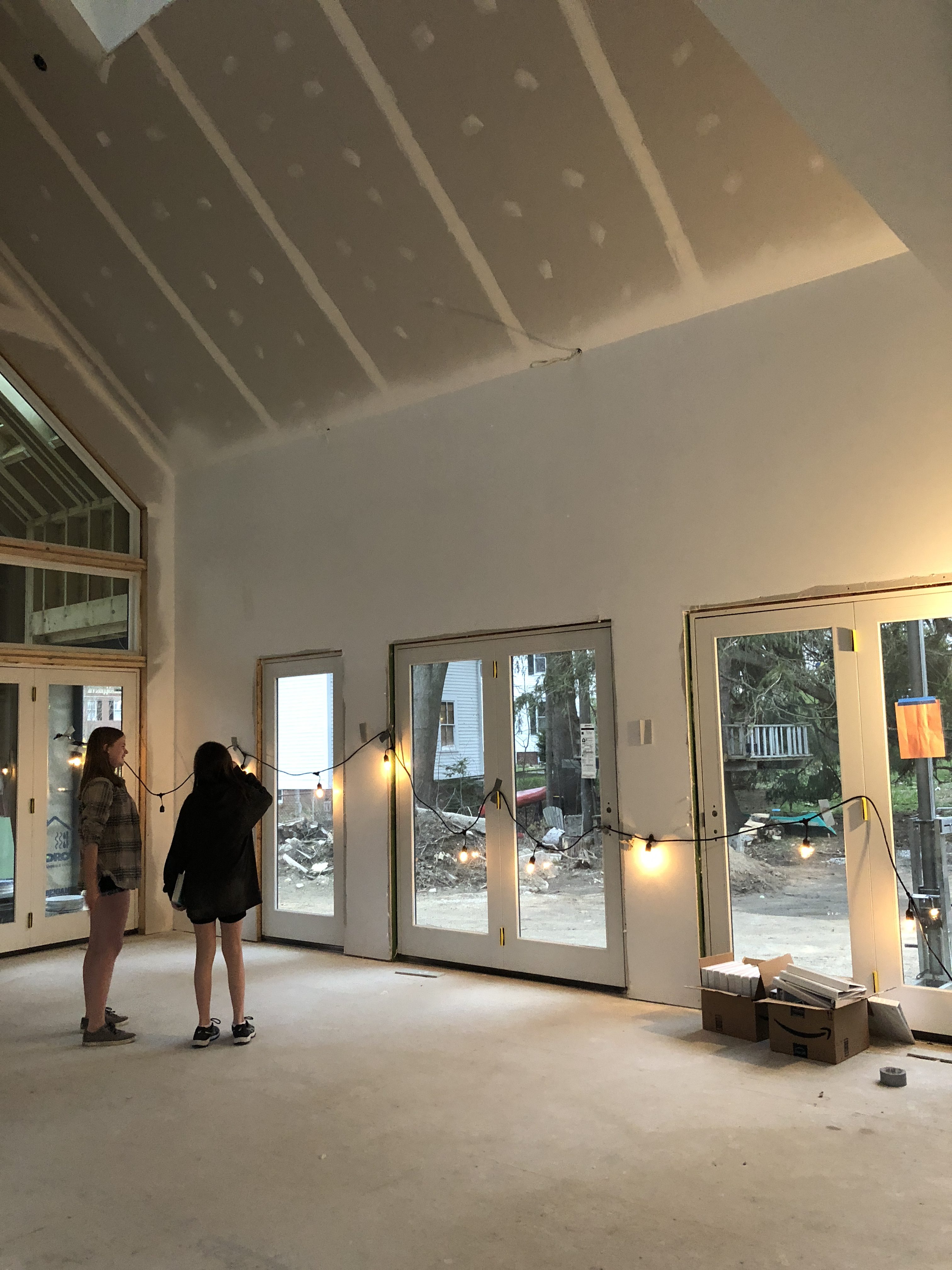 A few minutes later, the house was full of young singers. We stood in a circle and sang “This Land is Your Land,” “I’m a Believer,” “Eight Days a Week,” “Hallelujah” and “Alexander Hamilton.” The new building, with its vaulted ceiling, has the acoustics of a church, and the kids loved hearing their own echoey voices. Halfway through the practice, one of the bulbs in the light string exploded, wounding (mildly) one child, and terrifying all. “Should I get a broom?” James kept asking, anxiously. “I’m fine,” Hazel reassured me, showing me her scratch. I pulled the plug on the light string and we continued singing as the light faded outside. It seemed fitting–a tiny window for us to use the space before late July, when it’s ready for real. A glimpse.

The choristers’ parents began to arrive, and so I let them go. My son and nephew came home from their baseball games, and continued the throwing, catching and swinging in the yard as the sun set. I stood at the new threshold and watched them. Tomorrow, the floors start to go in. The electrician will come and give the new house power enough to light up twenty writers, fifty young singers, and one musician/novelist/dreamer/peacemaker. Power enough to support all the bulbs in a string of lights.

Although nothing makes me angrier than people who profess Christ voting for Trump, the woman in the Volvo and I do have something in common. Our Jesuses may look rather different–mine is dark-skinned and looks like he’d be quite at home shopping for bok choy at the co-op, and he certainly celebrates May Day––but surely there is common ground. I imagined the Volvo woman standing at her own threshold,celebrating the mild air, watching her own son swing a baseball bat. I closed my eyes and wished her well. 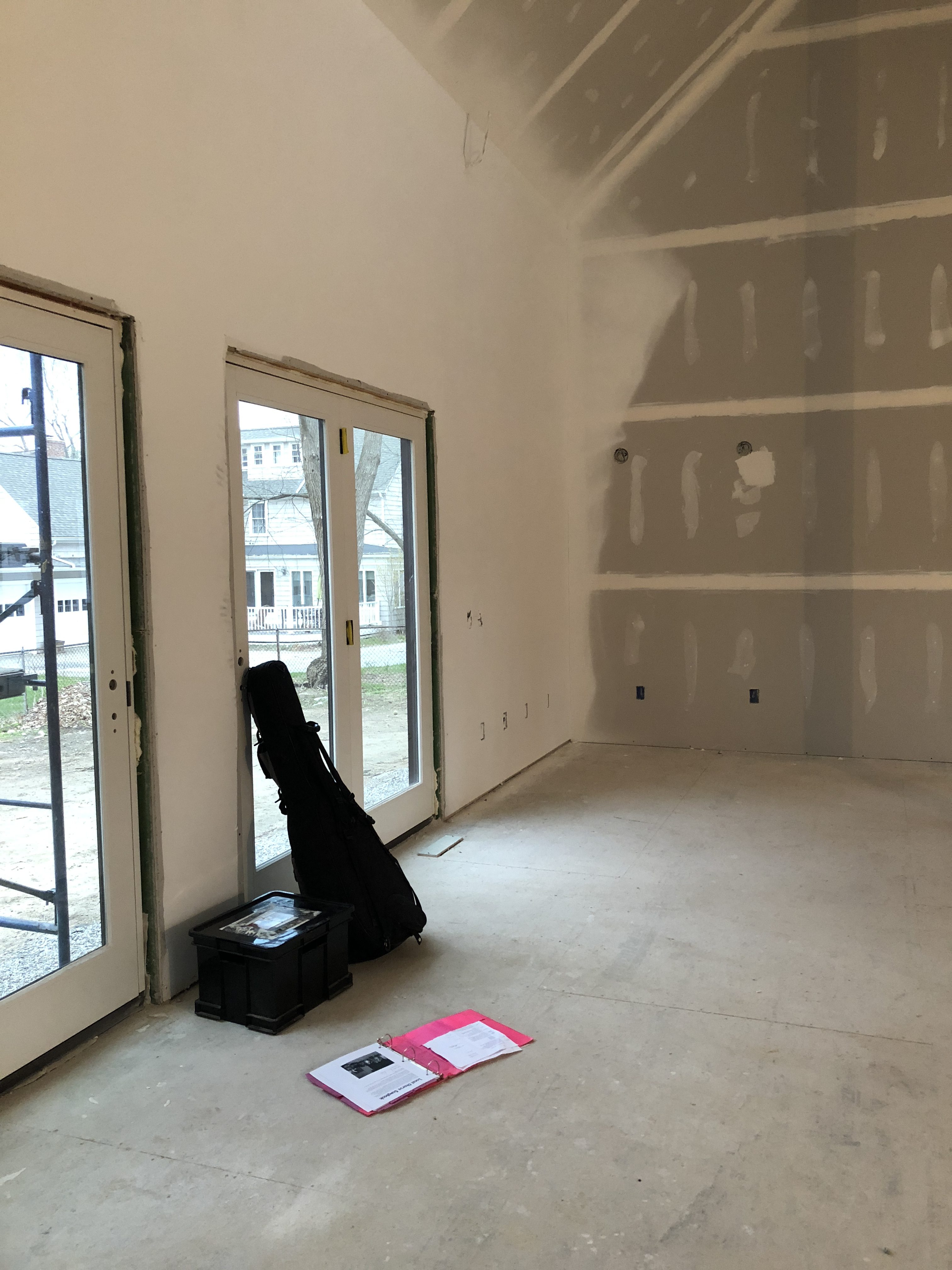 OMG. OMG. OMG!!!! I got up at 5:30, as usual, and immediately thought about the election. What had happened last night? I’d gone to bed with Moore ahead by about…